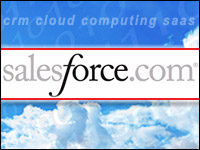 Salesforce.com has made its latest product, Salesforce.com Chatter, generally available for its 77,300 customers. First unveiled as a private beta earlier this year, Chatter is a real-time social collaboration application and platform for the enterprise. It allows employees to send feeds and status updates about projects, account and clients, as well as maintain profiles.

Accompanying the general release of Chatter are some 50 apps in the ChatterExchange category on AppExchange. These include such offerings as ServiceMax Suite and ServiceMax Chatter Volume, which track field service activities; FinancialForce Accounting and Chatterbox, an accounting solution; and Cloud Apps Carbon ’10, which helps companies identify ways to reduce operating costs.

These apps — along with some of the use cases provided by beta users that ultimately numbered in the 5,000 range — show that Chatter is already moving beyond CRM, the application for which it was originally intended, said Robin Daniels, director of product marketing for Salesforce.com.

“We saw companies like Saatchi & Saatchi use it for collaborative creative projects,” he told the E-Commerce Times.

Saatchi & Saatchi used Chatter to move transformative ideas from one department to another and to follow updates on specific projects, he said.

Farmers Insurance, another early adopter, had multiple stakeholders working on different aspects of its marketing strategies through Chatter and Seesmic, which used it to collaborate around business development

With the beta users’ experiences becoming public, it is now clear that early doubts about Chatter have been answered, said Jeff Kaplan, principal with ThinkStrategies.

“I think people wondered if it could be applied beyond CRM — and even if social networking technologies could work within the enterprise. Chatter has demonstrated both points,” he told the E-Commerce Times.

“But we saw a number integrate product development groups into the network to post schedule revisions and other changes,” she told the E-Commerce Times, adding that the APIs make it possible to deliver updates from any application or data source.

Salesforce.com credits the evolution of something it is calling “Cloud 2” for Chatter’s successful launch. The first iteration of cloud — according to Salesforce.com’s view of the market — was essentially the Software as a Service model. With Cloud 2, social elements have been introduced to add value to users’ real-time access to software applications and data delivered through the cloud.

“Cloud 1 was about efficiencies and cost saving,” Daniels said. “Cloud 2 is about making this service social and interactive.”

What’s also notable about this model is that it can be delivered anywhere, and it can incorporate external feeds, Sheryl Kingstone, an analyst with the Yankee Group, told the E-Commerce Times. “You can bring in social feeds, instant messaging and integrate all that into an application.”

Salesforce Chatter is now included for free with all paying user licenses of Salesforce CRM and Force.com.

The company has also introduced a Chatter-only license that provides access to such collaboration features as the profiles, status updates, feeds, other content and file sharing, groups, ideas, and limited access to the Force.com platform.