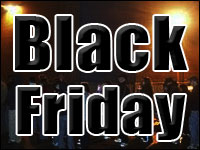 Retailers have been trying for years to expand Black Friday shopping with extended hours and prolonged sales, and this year that trend appears to be reaching new heights, with some stores even planning to be open early on Thanksgiving Day.

That’s not a universal rule, however. Glenview, Ill.-based Abt Electronics, for instance, is taking a different approach. While it did begin offering Black Friday deals at the beginning of November — at the risk of potentially running out of stock on popular items, company Co-President John Abt admitted — it’s not opening on Thanksgiving Day or even very early on Black Friday.

“Our employees are like family and everyone deserves time off, especially around the holidays,” he explained. “The nice thing about having an e-commerce business is the site can remain on while our employees enjoy the holidays with their own families.”

Abt is picking and choosing from a menu of options available to retailers to make the most of this most important four days.

Traditionally, retailers had one choice to maximize the start of the holiday season: open early on Black Friday with the best pricing possible and loudest advertising conceivable. Then the game started changing: Black Friday was pushed back to midnight on Thursday, and then even Thanksgiving Day itself. Meanwhile, the savings offered customers were offered earlier and earlier.

Now there is the slightest hint that the pendulum may be ready to start moving back in the opposite direction, as the backlash grows against employees working on these days or consumers being bombarded nonstop with marketing messages.

There is also the retailing conundrum of consumers getting inured to the “great deals” being offered for this week — and expecting to see them offered throughout the holiday shopping season.

For all this, we can thank e-commerce, not to mention the advent of mobile commerce and such practices as showrooming. Retailing, in short, is no longer a straight-line strategy, especially around the holidays, and each retailer must decide for itself which is the best strategy or mix of strategies for its particular circumstances and customer base.

The vast majority retailers still recognize the importance of Black Friday, of course, and make some accommodation to shoppers’ expectations — even Abt is opening an hour earlier, at 8 instead of 9 a.m.

“What we’re beginning to see is an escalation in openings around the date of Black Friday,” said David Cadden, a professor in the Entrepreneurship and Strategy Department at Quinnipiac University. “Many early openings on Black Friday were precipitated by the competition from online stores. Once that began, other brick-and-mortar locations had to join by opening earlier and earlier on Black Friday.”

Retailers learned they needed to grab shoppers before they finished their shopping, noted Jeff Weidauer, vice president of marketing and strategy for Vestcom.

There is, however, clearly a downside to this, and some retailers are starting to take note, Weidauer told the E-Commerce Times.

“Some stores are being painted as uncaring because their employees are being forced to work on Thanksgiving,” he said.

Another potential downside is the blurring of the occasion, Weidauer continued. If Black Friday has become “Gray Thursday” — as many now argue — it won’t be long before this series of days blend in with every other sale. Indeed, said Weidauer, “a strong argument could be made that this has already happened.”

Once Black Friday starts to appear like any other day, “retailers stand to lose shoppers’ sense of excitement, but little else,” he explained. “Black Friday has lost most of its meaning with the growth of online retail alternatives.”