T-Mobile has launched a promotion offering credit toward the purchase of its high-end HTC HD2 to anyone willing to trade in an iPhone.

The promotion was reported on several blogs including TmoNews, which cited an internal memo describing it. The company reportedly is offering credits from US$100 to $350. 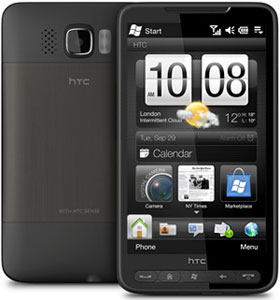 T-Mobile spokesperson Patty Raz confirmed the promotion in an email to the E-Commerce Times but did not provide much in the way of details. It is presently available only through participating dealers, 1-800-TMOBILE, or business direct sales representatives, she said. The promotion ends May 19, 2010.

It is unclear when consumers will be able to take advantage of the promotion, or how easy it will be to do so. For starters, T-Mobile’s Web site shows the device is temporarily out of stock.

An agent answering the 1-800-TMOBILE line Monday morning was not aware of the offer to swap the iPhone for the HD2. She did tell the E-Commerce Times that the company was working on fulfilling back orders and that new phones would be available “in the near future.” She mentioned another incentive — a $149.99 price for one device or line, or $99.99 each for two.

Either promotion — the $149.99 price or the credit in exchange for the iPhone — would be worth grabbing, at least based on some smartphone aficionados’ views of the HD2. It sports a 1-Ghz processor, a high-resolution touchscreen and a 16-GB memory card. Its only seeming drawback is that it runs on Windows Mobile 6.5.

That is hardly a deal killer, said Rob Enderle of the Enderle Group, who maintained that “of all the Windows Mobile phones, version 6.5 is the best.”

As for the HD2, it is an excellent high-end device that could easily rival the iPhone, depending on the user’s needs, he told the E-Commerce Times.

“It is definitely a much better phone for business,” said Enderle, although he added that Windows Phone 7 will provide more robust competition against the iPhone.

The rumored $350 credit — if that figure is accurate — would make a faceoff between the iPhone and the HD2 very interesting, he said.

“The interesting thing about T-Mobile is that even though it is a smaller provider, it has the highest level of customer satisfaction. It has a lot of potential– primarily because so many people are [annoyed] with AT&T. If T-Mobile could get the hardware mix right, it could make significant gains.”

Aiming at the iPad

“These are people who have the latest and greatest of everything — a category that includes the iPad and the HD2,” he told the E-Commerce Times.

These consumers could conceivably shift their beloved apps to the iPad and then migrate their phone use to the other ‘latest and greatest’ gadget on the market — the HD2, he said. “That phone would appeal to the bleeding-edge techie crowd.”

There are limits to the HD2’s appeal though, said Azita Arvani of the Arvani Group.

“The HTC HD2 may be a good phone for now, but it runs Windows Mobile 6.5 with a very limited app store to begin with. By holiday season this year, we will have Windows Phone 7, which has no backward compatibility with the previous version of the operating system,” she told the E-Commerce Times.

The Fly in the Smartphone Ointment

CES: The Magic Is Back

Which Company Will Define the Next Decade?