Google Gives Sony Reader a Leg Up on Library Size

Sony will be offering 500,000 public domain books that have been indexed by Google on its Sony Reader — an e-book product that is the primary competitor for Amazon’s Kindle, now in its secondgeneration. 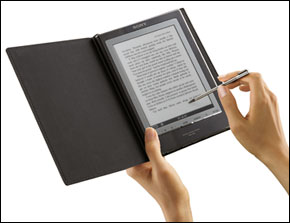 However, the offering doesn’t challenge the sexiest feature of the Kindle — namely, its ability to download books, magazines and newspapers wirelessly.

At best, Sony and Google’s move could increase awareness and desire for such a device, he said, but that wouldn’t necessarily translate into more sales of the Sony Reader.

Still, it might be worthwhile to take a closer look at the titles available on the Reader for free — and see how well they are selling on the Kindle, said Charles King, principal of Pund-IT.

“This space is small enough that even a slight inroad into the other’s market share could have a big impact,” he told the E-Commerce Times.

In any case, the price point is still more important than the availability of content in the e-book reader space, and that’s where the battle for market supremacy will likely be won.

There are models of the Sony Reader that are available for slightly less than US$300; the Kindle retails for $350. Until prices drop to the neighborhood of $200, analysts do not see much traction developing for the products, especially in a gloomy economy.

However, for consumers that can’t resist the latest tech gizmo — or dedicated readers who hate dragging around several books and magazines — both Sony and Amazon offer nifty devices.

Last October, Sonyunveiled a new addition to its line of e-book readers, the PRS-700. It features a six-inch touchscreen, weighs about 10 ounces and can store about 350 digital novels. It also comes with an expandable memory slot for Sony’s Memory Stick Duo media and SD memory cards, allowing the reader to hold thousands more books.

It doesn’t offer wireless connectivity, however, which is one of Kindle’s most popular features.

Amazon, for its part, has been steadily expanding its reach into this nascent consumer tech sector. Itrecently rolled out afree program that lets iPhone and iPod touch users download the same books available for Kindle onto their devices. The app also lets users change the text size on the screen, and add bookmarks, notes and highlights — one of the Kindle’s hallmark features. It is limited to books, though; Apple users cannot subscribe to magazines or newspapers as Kindle users can.

Amazon also backed away from a brewing legal controversy — albeit one that many legal minds thought it would have won if it had gone to the courts — over the Kindle 2’s text-to-speech functionality. This feature, which allows users to hear the text of a book read aloud, raisedthe hackles of copyright holders who saw it as a sleight-of-hand grab for their audio book rights.

One reason Amazon may have decided to allow copyright holders to decide whether the “Talk to Me”feature could accompany their work was its interest in cultivating a strong relationship with them over the long run, as it expands its Kindle feature set and, possibly, product line.

Indeed, now into its second generation, the Kindle 2 has improved on the few features that did not meet with user favor. The original product sported a clunky design and nonintuitive button placement.The Kindle 2 is now thinner (0.36 inches), weighs less than 10 ounces and features a five-way controller. The display offers 16 shades of gray instead of the original four — although still no color. The page turn speed is up by 20 percent, the battery life has been extended by 25 percent, and memory has been increased to accommodate the equivalent of 1,500 books, instead of the original 200 titles.

What Amazon and HP Are Now Learning From Apple