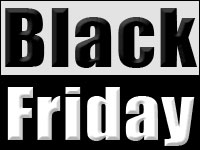 By all accounts, e-commerce exceeded expectations on Thanksgiving Day and Black Friday — and many expect a repeat performance for Cyber Monday.

For the holiday season-to-date, US$12.7 billion has been spent online, for a 15-percent increase versus the corresponding days last year, comScore reported. On Black Friday alone, $800 million in online spending occurred.

Black Friday online sales for 2011 were 20 percent higher than Black Friday 2010, according to IBM.

“Based on our data that showed significant online traffic on Thanksgiving and Black Friday, coupled with heavy promotional activity, a strong Cyber Monday is highly likely,” Heather Dougherty, director of research for Experian Hitwise, told the E-Commerce Times.

It’s possible that Cyber Monday sales could be up as much as 35 percent this year, compared to last, predicted IBM Smarter Commerce Chief Strategy Officer John Squire.

Considering that Cyber Monday sales reached $1 billion last year, according to comScore, “that is a significant amount of business that we will see transacted online,” Squire told the E-Commerce Times.

The performance of mobile commerce on Cyber Monday will also be of great interest.

“I think one of the lesser noticed trends this Thanksgiving and Black Friday is how successful mobile sales were,” Squire said.

“I think these numbers may have caught some retailers by surprise,” said Squire, “and perhaps they lost out on some opportunities as a result by not investing in the infrastructure or other supporting mobile commerce technology.”

It’s understandable that some companies may have been unprepared, despite the clear indicators of m-commerce’s growth over the past 12 months. In 2009, Squire observed, mobile sales were less than 1 percent of all e-commerce transactions.

“This was the year that broke down the barrier for m-commerce,” he said.

The iPhone led among mobile devices, according to IBM, accounting for 6.58 percent of m-commerce activity, followed by Android with 5.2 percent and the iPad with 4.71 percent.

There was considerable optimism leading into the peak holiday sales days, with many e-commerce analysts expecting e-tailers to do well.

The strong rise in mobile sales was anticipated by IBM, Squire said.

Well before the holiday, 39 percent of consumers indicated they were planning to shop on Cyber Monday, according to a PriceGrabber survey — up from 37 percent last year. For Black Friday, that number was 40 percent.

One of the drivers was the growing numbers of retailers that had implemented a multichannel shopping strategy for consumers, according to a survey conducted by Deloitte. More than seven out of 10, or 71 percent, said they would be visiting sites that would make it easy to pick up products in brick-and-mortar stores and vice versa.

The true drivers of the online crowds, though, were the deals. An overwhelming 92 percent of PriceGrabber survey respondents said they would be swarming online hoping to grab Thanksgiving-Black Friday discounts and take advantage of free shipping.