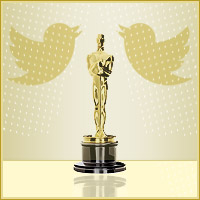 Several members of Hollywood’s elite walked out of the Dolby Theatre in Los Angeles clutching golden statues on Sunday, but it might have been Samsung that landed the largest victory at the event.

Partway through the show, host Ellen DeGeneres stopped to capture the moment by using a Samsung phone to take a selfie while on stage. She repeated the gimmick sometime later — only this time she was in the audience, encouraging a number of Hollywood stars to flank her in the image. 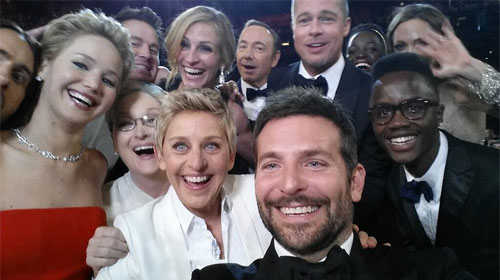 Jennifer Lawrence, Meryl Streep, Julia Roberts, Kevin Spacey, Brad Pitt and Bradley Cooper were among the celebs squeezing into the shot. DeGeneres posted the image on Twitter, encouraging users to make it the most retweeted image ever.

It took that crown later in the evening, surpassing the number of retweets collected by President Barack Obama, who shared a photo of himself embracing First Lady Michelle after he won the 2012 presidential election. Obama’s tweet has more than 780,000 retweets. DeGeneres’ currently stands at more than 2.7 million — the first time that a tweet has had more than a million retweets.

DeGeneres mentioned during the show that the retweeters had broken Twitter. The surge in traffic apparently knocked the network offline for a brief time.

Samsung was featured at the Oscars in a number of ways, including through a series of 10 promoted tweets featuring celebrity pics taken in the backstage green room and tweeted by the Academy of Motion Picture Arts and Sciences. The company also paid forfive minutes of airtime during the broadcast as one of the event’s biggest sponsors.

The success of the mass celebrity selfie could be seen as a major marketing victory for Samsung, Twitter and DeGeneres herself — her number of Twitter followers grew by 2 million over the weekend to 27 million.

“The biggest victor of Ellen DeGeneres’ photo is Twitter, for it shows the amazing viral effect of social media in real time, including during huge events like the Oscars,” Ronn Torossian, CEO of 5WPR, told the E-Commerce Times.

“The image, a great picture of a number of Hollywood icons, scores points for Samsung, but major brands don’t move brand metrics in a major way with one-off celebrity product placements. Major brands tend to view celebrity opportunities as part of a larger, more integrated marketing program,” he pointed out.

“If Samsung had only endorsed the Ellen-in-action Oscars activity, they would have succeeded,” said Lisa Parkin, president of Social Climber, “but I think viewers were overwhelmed with the ads and sponsorships.”

“However, the moment that Ellen created was priceless,” Parkin told the E-Commerce Times.

“In fact, one could say Ellen won best use of social media — not Samsung. The moment is associated with her charisma as the host, and the tweet was sent from her personal Twitter account,” she added.

“The Galaxy Note 3 was literally just the tool used to get her there. When viewers look back at this Academy Awards and the tweet that broke Twitter, Ellen will be remembered — and the details of how it happened will be obscured.”

“Five years from now, we may still be talking about the most tweeted image of all time, but will we be talking about it having anything to do with Samsung? I don’t think so,” predicted 5WPR’s Torossian.

Also taking some air out of Samsung’s balloon were the reports that DeGeneres switched to an iPhone when posting photos from behind the scenes.

“The fact that Ellen DeGeneres used an iPhone backstage certainly puts a damper on Samsung and makes it much less exciting for the brand,” 5WPR’s Torossian said.

“The best celebrity product placements are organic and real. When she is using another brand backstage, it is much harder to view her Samsung usage as authentic,” he pointed out.

With all the attention the Oscar tweet got, though, it’s difficult to imagine that brands won’t be going after similar opportunities — most likely in droves. That could severely limit any marketing value gained from the exercise.

“Stunts like this certainly do test the public’s patience,” Torossian observed. “While the tweet gained significant, record-breaking online traction, there are still many critical of a brand — and individual — forcing something to go viral. This stunt will not be replicated in years to come.” 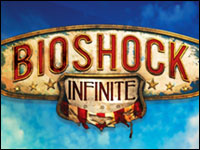