Google Lights a Candle, China Blows It Out 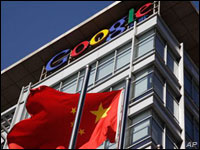 Google’s relationship with the Chinese government officially entered the brinksmanship phase this week with the announcement from the company that it is ending its Communist-mandated censorship of search results and directing queries to its unfiltered Hong Kong-based service. The Great Firewall immediately slammed down on some of those results, and there are reports of possible backlash involving other Chinese business dealings for Google, particularly in the mobile space.

Meanwhile, those viewing this current round of quick-steps in the strange dance between the company and Communist Chinese leaders are doing their own searches; they’re looking for clues as to how other tech companies will react to Google’s moves, and they are seeking signs regarding China’s near-term strategies for balancing economic reform with maintaining an iron grip on the flow of information.

“Overall, China is entering a period in history where there are a lot of uncertainties,” Matthew Gertken, China analyst for global intelligence company STRATFOR, told the E-Commerce Times. “They’ve experienced rapid growth, and there’s a lot of reason to suspect that growth can’t be maintained forever.”

China is banking on stoking that growth with foreign technology companies gaining access to the biggest country on the planet, where the market for computers and smartphones is still in the development stage. However, Google’s gambit — sparked by allegations that its recent hacking intrusion originated in China — could put an unwanted spotlight on the negatives those companies could face in dealing with the Communist country.

“This shows that companies are facing an increasingly difficult environment in China for human rights, and for operating in an ethical and honest way,” said Cynthia Wong, Ron Plesser Fellow at the Center for Democracy and Technology. “It puts other companies on notice that these risks are out there. Most people think that companies do have responsibilities to users, and they need to think through these issues before they go to China.”

Media reports on Tuesday showed that some unfiltered search results from Google’s Hong Kong-based service were being intercepted. Google spokesperson Jay Nancarrow told the E-Commerce Times late Tuesday morning that “it seems that certain sensitive queries are being blocked. However, the