In the U.S. market, the percentage of broadband households owning and connecting at least one product besides PCs to the Internet has increased 45 percent between 2010 and 2011. Today, approximately 40 percent of all U.S. broadband households own at least one Internet-connected device, with game consoles accounting for 75 percent of these products. The increase in the adoption of these technologies offers manufacturers, pay-TV providers, advertisers and content owners new revenue and growth opportunities. 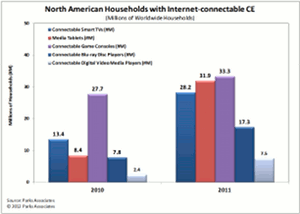 Even more important to recognize is the shift in consumer behaviors.

These devices will continue to complement and replace some traditional methods of search, video-centric activities and advertising.

For example, 30 percent households with an Internet-connected CE used the device to rent at least one movie in the past month. Approximately 35 percent of mobile phone owners use their phones to look up listings while watching TV.

Unlike the tablet and smartphone market, where Apple’s competitors have primary used the Android operating system and applications platform, many variants exist in the connected consumer electronics market. There are opportunities for a variety of players. Factors that will differentiate connected CE operating systems and application platforms in the long term include the following:

Implications for the Pay-TV Market

The connected CE market presents both a challenge and an opportunity for traditional pay-TV providers. These connected devices create for consumers retail-based alternatives to multichannel offerings, video-on-demand, and DVRs, but they are present pay-TV operators with the opportunity to extend TV Everywhere services. They benefit operators by reducing the number of set-top boxes needed per home and opening opportunities to deliver a more personalized video service, thus raising customer satisfaction.

Second-screen integration, which allows service providers to provide integrated ad campaigns across multiple screens, opens up a new path to reach and engage audiences anytime, anywhere, and on any device. Advertising on multiple screens expands the overall ad audience, allowing higher rates due to the larger number of eyeballs watching each advertisement and the higher level of interactivity. The ability to measure the impact of advertising across different devices will lead to a more personalized and targeted advertising experience.

Two-screen synergies are important to advanced TV and connected TV development because they can turn TV from a passive experience into an engaging one. Major advertisers and content owners are focusing on automatic content recognition solutions that will populate the smartphone or tablet with information and advertising complementary to the programming viewed on the television. This development will be a significant step forward in providing more personalized advertising environments.

Approximately 30 percent of U.S. mobile phone users and 40 percent of tablet owners use their device to look up info about the program they are watching or products and services they have seen advertised. 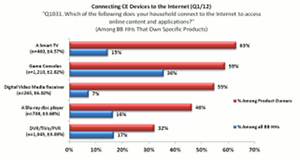 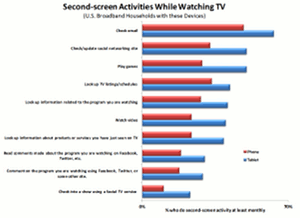 As smart TVs and other connected CE offer more apps and online content, their user interfaces (UIs) are evolving to allow for user-customization and better organization of apps by genre. One example of customization is the ability to present a specific interface to individual users based on their learned preferences.

As connected consumer electronics take on an ever-increasing gateway role for multiple types of content and services, the ability to provide recommendations becomes increasingly important. Content owners and advertisers in particular will benefit from the ability of a connected device to suggest content or marketing information based on a viewer’s habits, demographic information or contextual information about a currently playing program.

Gesture and voice recognition give providers the ability to offer a unique interface between the viewer and the TV content, with the hope that this interaction will lead to higher customer satisfaction and a higher level of engagement with programming and advertising.

The popularity of Kinect and Siri has spurred CE manufacturers to integrate these new control technologies. Even in this early stage, over 50 percent of U.S. users of Apple iPhone 4S are very satisfied with the Siri voice-command feature, with an additional 21 percent satisfied.

In addition, nearly 40 percent of iPhone 4S owners now want similar voice features for their TVs, indicating these solutions can have crossover appeal among different platforms, from smart TVs to gaming.

At CES, LG Electronics demonstrated a downloadable game (in this case, “Fruit Ninja”) in a 3D format played without a controller. This kind of simple and fun interaction with the smart TV encourages more living room-centric gaming, and also generates interest in 3D content, which to date has been sorely lacking.

Parks Associates’ “Value of Video: Shifting Consumer Dollars” reveals that only 6 percent of U.S. households own a 3D TV, and purchase intentions are far greater for a smart TV than one with 3D capabilities (by a factor of five times). However, with the introduction of passive 3D glasses that do not require batteries and charging, and are less expensive than the active-shutter glasses so highly prevalent with previous 3D TV models, 3D televisions should sell in greater numbers over the next few years.

Kurt Scherf is VP and principal analyst at Parks Associates.