Gaming Diversifies: Are You Ready to Cash In?

Gaming is no longer just for teenagers — it’s entertainment for everyone. The gaming industry is not an exclusive club for large game developers, publishers and console manufacturers. Not any more. You too are invited.

The Internet has reinvented gaming, and now gaming is reinventing the Internet. Over the past 10 years, the Internet and gaming industries have enjoyed a symbiotic relationship, feeding each other new ideas and business models.

For instance, MUD (multiuser dungeon) games are not only the precursors of MMORPGs (massively multiplayer online role-playing games) such as “World of Warcraft” and virtual-world or alter-ego games such as “Second Life,” but they also embody many elements of a social network.

In the meantime, many new Internet technologies and business models such as e-commerce, micropayments, interactive advertising and subscription-based online entertainment services have found a place in the gaming world.

Nowadays it’s getting difficult to distinguish a game from a social network and vice versa, and virtual-world games such as Second Life are blurring the lines even further. Since these games are about virtual “realities,” anything that happens in the real world can happen in the game.

Better yet, anything that’s not ready or appropriate for the real world can also happen in the virtual world. Second Life is therefore not just a game; it’s also an advertising and promotional platform, a collaborative environment, an online communication platform, an incubator for new ideas and concepts and a potential platform for digital content distribution (and did I mention a virtual sex playground?).

A Place to Call Home

In this brave new world of gaming, the game (and its success or failure) is not just about gameplay and content — it’s also about community and socialization.

Granted, there are gamers who prefer to face only the CPU (central processing unit) and never bother to play with or against others; however, the success of several community-based games and gaming services provide ample evidence that many gamers — when they play games — are also seeking a communal experience and a sense of belonging.

The subsequent diversification of gaming genres and business models is also leading to the diversification of gamers. The dichotomy of casual versus core gamers is splintering as the gaming industry expands. (There are six segments of gamers.) Time and money are only two of the many dimensions that define a gamer, and an equally if not more important dimension is what motivates a person to play games.

A marketer looking only at time and money spent is missing the bigger picture. Dormant gamers might not be spending lots of money simply because they cannot find any appealing content or services. In the meantime, a leisure gamer who spends a lot of time playing casual games but contributes little money can be better monetized if the right business models exist.

Tomorrow, with new mass-market friendly gaming platforms (think Nintendo’s Wii, for example), new business models such as community-oriented gaming services, free advertisement-supported casual games and play-for-free but pay-for-item models, the growth potential in both the size and ARPU (average revenue per user) of these middle-market gamers is considerable. 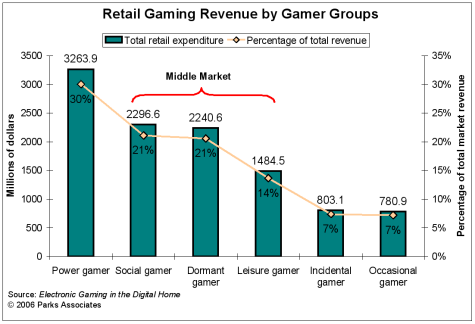 Online gaming has also introduced new industry players into the gaming industry. IBM not only provides processors to all three next-generation game consoles, the company is also the network operator behind several successful online games.

Many carriers have also entered this market by providing games-on-demand services for PC and TV platforms. Comcast and Verizon are both targeting gamers for their top-tier broadband services, betting gamers will pay to become the “low ping bastard.” (Comcast calls its service “Game Invasion.”)

As more service providers build their IP-based fixed mobile convergence packages and more device manufacturers build IP connectivity into their platforms, we anticipate the concept of pervasive gaming to come to fruition, benefiting not only Microsoft — a big proponent of this concept with its “Live Everywhere” initiative — but many other companies traditionally not found in the gaming industry.

The concept of pervasive gaming involves portability (cross-platform content) and networkability (cross-platform play). Portability gives gamers the flexibility to purchase a game once and then unlock it for multiple platforms at incremental cost. Networkability enables multiplayer gamers to play online games or certain game elements across multiple platforms.

Half of the gamers surveyed already play games on more than one platform. As this percentage continues to grow, the demand for pervasive gaming will be even higher. A service provider aspiring for a quadruple play strategy should look into this concept and position gaming as one of its key user experiences.

Yuanzhe (Michael) Cai is director of broadband and gaming for Parks Associates.
Get Permission to License or Reproduce this Article

Vista Gamers to Get Xbox Experience

Brain Control Takes Gaming Out of Your Hands