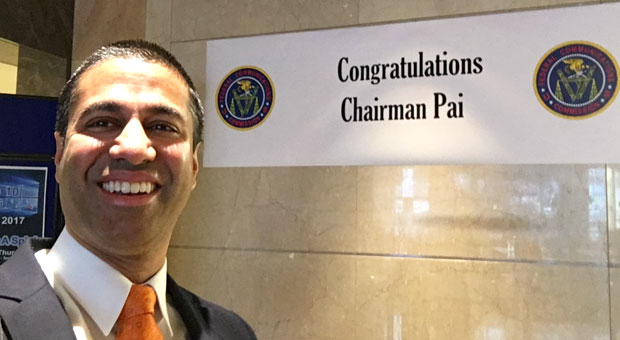 Ajit Pai, the new chairman of the United States Federal Communications Commission, last week issued a call for activation of the FM chips in smartphones.

The vast majority of smartphones sold in the U.S. have FM chips, but they’re activated in only about 44 percent of the top brands, Pai told attendees at the North American Broadcasters Association symposium on the future of radio and audio.

Although that’s nearly twice the 25 percent figure of two years ago, it’s not good enough, Pai suggested, noting that 80 percent of smartphones sold in Mexico have their FM chips activated.

Further, FM services use one-sixth as much battery power as streaming audio, and they consume less data, he pointed out.

The FCC will make it easier for AM stations that don’t have an FM translator to apply for one, and will vote this week on a new reform proposal that would give AM stations greater flexibility in siting their translators, Pai said.

The FCC won’t issue a mandate requiring activation of FM chips, because “I don’t believe [the agency] has the power to, and … it’s best to sort this issue out in the marketplace,” he added.

Not With a Bang but a Whimper

“In many countries, this FM capability is already on and is considered a requirement, given the bandwidth requirements and the slower evolution of their networks from 3G to LTE,” IDC Program Director Will Stofega told the E-Commerce Times.

“This is a solution looking for a problem. I don’t think there are a lot of consumers saying they need to have this,” observed Ken Hyers, a research director at Strategy Analytics.

“The FCC chairman’s remarks are not consistent with trends in personal technology consumption patterns, and would limit the free distribution of news, entertainment and other content by means of regulatory oversight,” said Werner Goertz, a research director at Gartner.

“We no longer consume radio content exclusively through radios and boom boxes,” he told the E-Commerce Times.

The proliferation of radio content over digital networks “is a sign of the disruptive force of the Internet on legacy communications technologies, including radio,” Goertz maintained.

Digital radio “enables global distribution and dissemination of information and content and democratizes access to opinions, news and entertainment,” he said, noting that radio content consumption carries over into the connected home, connected cars, mobile and wearable domains, and the immersive experience.

Apple Is the Holdout

The major U.S. wireless carriers have activated FM chips in many of the smartphones they offer.

Sprint did so in 2013, and T-Mobile followed in 2015. AT&T announced it would include FM chip activation in its 2016 device specs for Android smartphones. Verizon activated the chip last summer, but only in the Samsung Galaxy S7 and S7 Edge through software updates.

Only Android smartphones can have the FM chip turned on. Apple has not enabled the functionality for the iPhone, despite a call from the NAB to do so.

“Intellectual property royalties are the reason you don’t get FM chips turned on,” Strategy Analytics’ Hyers told the E-Commerce Times. “If you turn them on, you have to pay royalties on the patents for FM radio. You would be surprised at the number of handset technologies that aren’t turned on for this particular reason.”

It’s possible that streaming radio companies are fighting to keep FM chips inactivated, IDC’s Stofega suggested, because “they want and need to add revenue and don’t want to compete with terrestrial radio stations.”