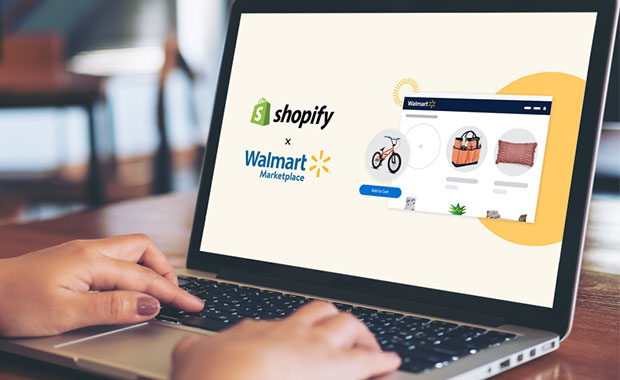 A new e-commerce partnership could bring 1,200 Shopify small business sellers to the Walmart Marketplace this year, the companies announced Monday.

Walmart’s top e-commerce priority for years was to build a marketplace customers would trust. The company has joined forces with Shopify, an all-in-one commerce platform used by more than 1 million businesses, to open the Walmart Marketplace to its sellers, said Jeff Clementz, vice president of Walmart Marketplace.

“This integration will allow approved Shopify sellers to seamlessly list their items on Walmart.com, which gives Walmart customers access to a broader assortment,” he said.

Many Shopify sellers already were established on Walmart.com, but Marketplace has not penetrated to the extent possible, making this deal a tremendous opportunity, Clementz added.

“We have been in talks over the years, but discussions quickly came together over the past six months,” said Satish Kanwar, vice president of product at Shopify.

Shopify wants to give its merchants the power to choose where they want to sell and to make it as seamless as possible for them, he told the E-Commerce Times.

“With that in mind, we are partnering with Walmart to help our merchants drive sales and grow their businesses. Anything that reduces the barrier to entrepreneurship is good for merchants, good for consumers, and good for Shopify,” Kanwar added.

E-commerce in the United States grew 74 percent last quarter, in part due to a shift in shopping needs caused by the pandemic. Growth in Walmart’s Marketplace outpaced the overall business growth, noted Clementz.

The launch of this integration with Shopify is under way, with a focus on U.S.-based small and medium businesses that complement Walmart.com’s offerings.

Approved vendors can make changes to product images and inventory within Shopify. Those changes will be reflected on Walmart’s site immediately and automatically.

The Walmart Marketplace, which launched in August 2009, experienced slow growth until 2014. That is when Walmart added a massive number of new third-party items from small vendors looking for an alternative to Amazon.

The Walmart Marketplace mimicked Amazon’s tactic of offering shipping services for third-party vendors through Walmart’s massive logistics network. Two years ago, it announced Walmart Marketplace items would be eligible to participate in its free, 2-day shipping program and in-store returns.

Shopify, founded in 2006, has become a favorite choice for businesses seeking an e-commerce on-ramp that is fast and cost-friendly. Monthly fees start at US$29. That buys an online store with digital tools to manage payments, inventory and shipping.

Both Amazon and eBay already have partnered with Shopify,

“While Amazon clearly dominates the e-commerce channel, the expansion of Walmart’s presence with third-party sellers is a step in the right direction,” said Frances Bigley, spokesperson for CommerceIQ.

“It does mean that one-party brands must be particularly diligent about managing this channel properly to avoid out-of-stock issues and price gouging for consumers,” she told the E-Commerce Times.

E-commerce platforms like BigCommerce and Shopify are employing affordable and easy-to-use integrations to make it as easy as possible for fast-growing merchants to sell across various channels, including Walmart Marketplace and social platforms like Facebook and Instagram, noted Sharon Gee, head of omnichannel partnerships at BigCommerce.

“This approach by Walmart will help retailers to expand their general catalog and expose their customers to new products from up-and-coming digitally native brands, and ultimately, help them be more competitive with Amazon,” she told the E-Commerce Times.

Reach is incredibly valuable, he told the E-Commerce Times. “Sellers will put their products on the platforms that give them the potential to reach the most customers and drive the highest sales.”

The partnership between Walmart and Shopify should make smaller e-commerce players uneasy, as the copycat effect comes into play, Elman suggested.

“As more sellers go on a platform, others will see their success and attribute it to the platform, pushing them to move onto the platform as well. Smaller e-commerce players without a viable long-term strategy to grow seller numbers may find themselves easy targets for acquisition,” he explained.

That could mean trouble for smaller e-commerce companies, Elman warned. It could result in online marketplaces consolidating around key players.

“It seems like the space will likely consolidate around Amazon, Walmart and Alibaba in the long term,” he said. “The exception would be niche sellers like Reverb for musical equipment and other specialized platforms that can deal in specific industries or categories of products.”

These platforms can offer specialized insurance, shipping and customer networks, along with a more detailed product set, Elman continued. For example, a consumer who simply wants a guitar might go to Amazon or Walmart, but a shopper who wants a 1969 Fender Stratocaster in Sunburst finish likely would go to a more specialized retailer like Reverb.

“Smaller e-commerce players that are generalists now should look to curate a specific customer base or product set and cater exclusively to that niche,” he suggested. “That’s the only way to differentiate enough to compete with the scale, efficiency and resources of the large platforms like Walmart and Amazon.”

“This, in turn, could sway more customers to leave Amazon as their primary shopping platform in favor of Walmart,” said Elman. “Right now, much of Amazon’s dominance is the number of sellers and visitors it has on its platform, and the value offered by the Prime program.”

The Walmart-Shopify partnership could be a big game-changer for small and medium-sized businesses, observed Bart Mroz, CEO of Sumo Heavy.

The Walmart-Shopify partnership supports Shopify’s strategy to give its sellers the tools they need to compete in today’s competitive e-commerce marketplace, he told the E-Commerce Times.

“Last year, Shopify announced it had invested $1 billion in its fulfillment network, which would help its sellers ship items more efficiently and compete with the retail giants — specifically Amazon, which popularized two-day shipping,” Mroz noted.

The partnership comes at an opportune right time, as many consumers want to support smaller e-commerce businesses in the wake of COVID-19, he added.

The typical perks of buying from Amazon — such as faster shipping and a wide product range — were not as widely available, because of warehouse shortages and shipping restrictions in some areas. So consumers started looking elsewhere for the products they needed.

“The threat of Amazon and other large online retailers, like Wayfair, will still loom large, but with a new way channel to get in front of tens of millions of consumers, SMBs may actually have a chance to compete with some of the super sellers on Amazon,” Mroz said.

The new venture between Walmart and Shopify will help small and medium business owners reach millions of customers who shop on Walmart.com every day. It also broadens the assortment of items customers can shop on the Walmart site, said Robb Hecht, adjunct professor of marketing at Baruch College.

This comes during a time period when online shopping is surging due to the coronavirus pandemic and related retail restrictions. The result will increase the value and traffic in the Walmart ecosystem.

This venture likely is not a major threat to large online competitors like Amazon and Wayfair, which already have large audience reaches, he told the E-Commerce Times.

However, it could pose a threat to smaller direct-to-consumer social commerce companies that are selling direct to their customers via Shopify services, Hecht pointed out.

It could be an issue for those new to the Facebook Shop platform and others that hoped to grow their direct audience reach with customers.

“Now D2C Shopify sellers could become very interested in the audience reach and the buyers’ intent Walmart gives them and their goods, and bring less business to Facebook Shop,” Hecht said.

“I think this is great for small businesses and Walmart. It will make their marketplace more competitive and open small businesses up to much more exposure than ever before,” said Jeff Moriarty, marketing manager at Moriarty’s Gem Art which joined the Walmart Marketplace Monday.

The integration will make it much simpler to sync with a Shopify store, he told the E-Commerce Times.

The more competition, the better it will be for small businesses that find it difficult to compete with low-margin sellers on Amazon, Moriarty added. That makes him very optimistic about this new relationship.

“This partnership gives smaller e-commerce companies a leg up against Amazon by distributing directly to Walmart,” said Michael Dash, CEO of ChannelReply, which sells to eBay, Amazon, Walmart and Shopify customers.

“They don’t have to go through the traditional account setup and upload process, and they can reach a huge audience immediately,” he told the E-Commerce Times.

Vendors that are not selling on Walmart already can see upwards of a 20 percent increase in their bottom line, Dash added.

“I don’t think it will necessarily take business away from Amazon. I think it gives the sellers access to a new buyer they wouldn’t have access to,” he said.

Also, a number of brands refuse to sell on Amazon due to bad experiences, noted Dash. Those vendors may take a dip into Walmart waters.