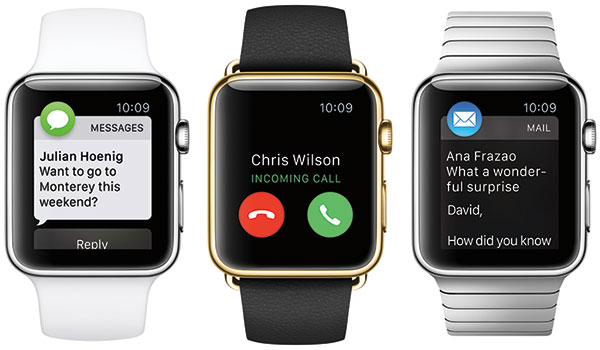 Apple on Tuesday released some guidelines that may deliver a charge to the accessory market for its Apple Watch.

The guidelines make recommendations for accessory makers interested in making bands for the new smartwatch.

“A well-designed band will securely attach to Apple Watch while not interfering with its operation,” the guidelines explain.

To be compatible with the watch’s heart rate sensors, bands should “provide sufficient adjustability for the user to achieve a snug, yet comfortable, fit that prevents movement of Apple Watch relative to skin,” the guidelines also say.

“Bands must not prevent the user’s skin from maintaining direct contact with the Apple Watch heart rate sensors and back of Apple Watch, and must incorporate sufficient margin to compensate for shifting or dimensional changes of the band material,” they note. “Failure to do so may interfere with Apple Watch wrist detect and Apple Pay features.”

No mention is made of the crippling effect of dark tattoos on the heart rate sensors — a problem that has cropped up since the watch was released.

Bands for the watch must comply with all applicable environmental regulations in the regions where they’re sold, as well as any restrictions on the use of substances and materials such as tin compounds, lead and formaldehyde, or endangered flora and fauna.

Magnetic chargers in a watch band are prohibited by the guidelines.

Compliance with the guidelines alone won’t give a band maker the right to use the “Made for Apple Watch” name or logo. That permission must be granted expressly in a separate agreement.

Apple always has been aggressively protective of the look and feel of its products, and the watch band guidelines are consistent with that, noted Carolina Milanesi, chief of research and head of U.S. business for Kantar Worldpanel ComTech.

Unlike third-party cases for the iPhone, bands have a greater impact on the look and feel of the watch, she explained.

“With these guidelines, Apple is protecting a little more of the look and feel of the watch than the phone, because the watch is so personal and the band is an integral part of that product,” Milanesi told the E-Commerce Times.

Apple produces a number of bands for its watch, but release of the guidelines appears to be a recognition that smart timepiece shoppers may want more than the company can offer.

“The most popular [accessory] will be bands, and having options to go beyond Apple,” Milanesi noted.

If bands become as big as cases for iPhones, it will make accessory makers very happy.

The “attach rate” for iPhone cases is estimated to be in the 70-75 percent range. In other words, around three out of every four iPhone buyers also buy cases for their phones.

On release of the guidelines, some Apple watchers predicted watch bands flooding the market, but Morgan disagreed with that prediction.

“There’s a fair amount of risk for someone to come in out of the blue and put all your eggs in the watch band basket,” he said.

“What I expect to see is a lot of established folks that already make accessories for Apple products expanding their portfolios,” said Morgan. “Nobody is going to make their name in the world or put a dent in the universe off the wristband market for Apple watches.”

In addition to the band guidelines, Apple posted a support page to its website with advice on wearing the Apple Watch. It contains information about potential skin sensitivities, getting a good fit and proper care and cleaning.

“A small number of people will experience reactions to certain materials,” Apple explained on the page. “This can be due to allergies, environmental factors, extended exposure to irritants like soap or sweat, and other causes.”

Although Apple doesn’t offer a specific remedy for allergic reactions, that could be one area in which third-party band makers find a receptive market.

Another source of discomfort could be wearing the watch too tightly or too loosely, Apple pointed out.

“An overly tight band can cause skin irritation. A band that’s too loose can cause rubbing,” the company explained.

“If you experience redness, swelling, itchiness, or any other irritation, you may want to consult your physician before you put Apple Watch back on,” Apple suggested.

Much of the information on the support page is pretty basic to anyone that’s ever owned a watch — smart or otherwise.

“In the U.S. market, it’s better to be safe than sorry,” Milanesi said. “If you have to treat some users as if they were kids, maybe it will save you a day in court.”