Walmart Throws Down Gauntlet to Amazon 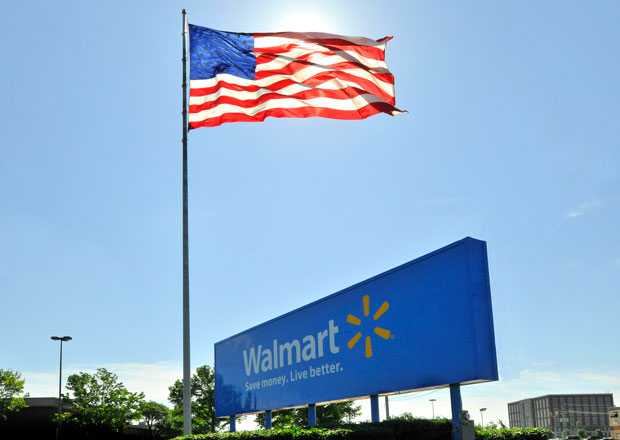 Walmart on Tuesday outlined plans to grow its critically important e-commerce business in the U.S. by 40 percent over the next fiscal year. The company intends to leverage a series of key acquisitions and its more than 4,600 brick-and-mortar locations to mount a direct challenge to Amazon for millennial customers.

Walmart — the largest retail operation in the world and the leading U.S. challenger to Amazon — presented its objectives at its annual meeting with Wall Street analysts, where CEO Doug McMillon said the company is committed to turning itself into a digital powerhouse.

Not Your Father’s Big Box

Walmart plans an aggressive expansion of its online grocery business, with 1,000 new locations in the U.S., McMillon said. The company also has been experimenting with delivery to customers in the U.S., the use of automated towers to speed the in-store pickup experience, and ways to expand the use of Walmart Pay.

Customers who started shopping at Walmart.com after previously shopping only in brick-and-mortar locations increased their in-store shopping as well, he pointed out.

The U.S. retail market is expected to reach US$3.5 trillion in 2017, based on data from Forrester Research, representing 3.8 percent growth, said McMillon. Brick- and-mortar sales are predicted to reach $3.1 trillion, growing at a little more than 2 percent. The e-commerce market, which is expected to grow 14 percent, will account for the remaining $450 billion in sales.

Online grocery shopping is an untapped market within the e-commerce space, and that category is a major focus for Walmart, according to McMillon.

Walmart hopes to leverage its ability to provide groceries directly from its thousands of stores, which are located in proximity to 90 percent of the U.S. population, and work with employees and outside services, such as Deliv, to fulfill online orders.

“It took them a while to wake up, but the response has been a wave of transformational approaches,” he told the E-Commerce Times.

Rival big box stores like Target also have seen surges in e-commerce from a lower base figure, she told the E-Commerce Times.

During the first half of fiscal 2018, Walmart reported a stunning 62 percent growth in e-commerce sales, compared with 12 percent the prior period.

“We want to be the destination for customers to save money no matter how they want to shop,” said Marc Lore, CEO of Walmart’s U.S. e-commerce business, at Tuesday’s meeting.

The company is focused on elevating the Walmart.com brand, redesigning the website, elevating Jet.com to appeal more to higher-income millennial customers, and attracting more premium brands, he added.

“Walmart’s recent forays into innovative tech, from facial recognition to returns via their app, are bold, putting them into a category once reserved only for brands like Apple,” said Andrew Park, senior director for customer experience strategy at InMoment.

“The legacy discount retailer’s plan to grow their e-commerce business exponentially may be part of a larger strategy — that of creating a new digital sandbox where they can nimbly test, learn and iterate at a rate that rivals Amazon,” he told the E-Commerce Times.

Surprisingly, Walmart emerged as a favorite brand of millennial shoppers in the 2017 Food Love List published by Conde Nast and Goldman Sachs, Park noted, and those customers may wonder whether the retailer can make the transition to a true e-commerce innovator.

“These investments in technology, if done correctly, can convert this intrigue into long-term loyalty and trust,” said Park, “but the only way to do this successfully is to stay connected to the humans at the heart of every business, which includes both customers and employees.”