For many in the West, Asia is viewed as a large monolithic geographic area with some slight differences among regions. However, a more-informed understanding is that there are several market segments, and an understanding of some of the key differences between segments is valuable to developing effective market strategies.

Today, both India and China are propelled by strong economic momentum. Historically, they both also had a deep and lasting cultural influence on much of Asia. An awareness of this history is useful in developing effective business strategies.

Japan, the second-largest economy in the world, is part of Asia. It has historically been the “best” Asian market for most companies, but this is rapidly changing as the China-India momentum builds.

It is useful to get a sense of the scale of the opportunity. An examination of the worldwide Internet population shows Internet activity concentrated in the U.S. and Europe. 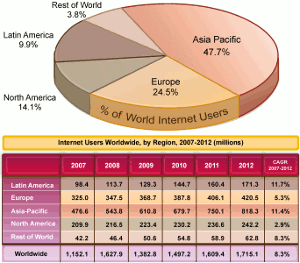 China, Japan and Korea have a rapidly developing Internet presence. Most of the rest of Asia is undeveloped but growing — and wide open in terms of opportunity.

The Internet is only just beginning to take root in much of Asia (18 percent vs. 73 percent for North America), and only Africa has less penetration. However, it is expected that almost half of all Internet users will be Asian by 2013.

Already, there are more people online in China than in the U.S. There could be a major opportunity for companies that learn to tap into this new online population. However, this will require an understanding of the diversity and characteristics of the various segments and will also demand new approaches in communication and marketing.

Some interesting, perhaps little-known facts provide a useful contrast between Asia and Europe and demonstrate both the present-day reality and the scope of the future opportunity:

All of these factors point to fundamental shifts in the global economy and indicate that many of these trends will accelerate further. Asia is a significant opportunity for informed globalization managers — and probably key for long-term leadership.

Global companies need to develop broad and unique country-specific strategies to be able to prosper and thrive in this rapidly changing world. Localization and translation will be key elements of any successful globalization plan and should present significant opportunities to vendors that prepare for this change.

It’s wise to remember that the Chinese ideogram for “change” can also mean “opportunity.”

The impartial, nonprofit Globalization and Localization Association (GALA) maintains a Language Technology and Services Directory of professional firms, many of which focus on helping customers localize for European markets.