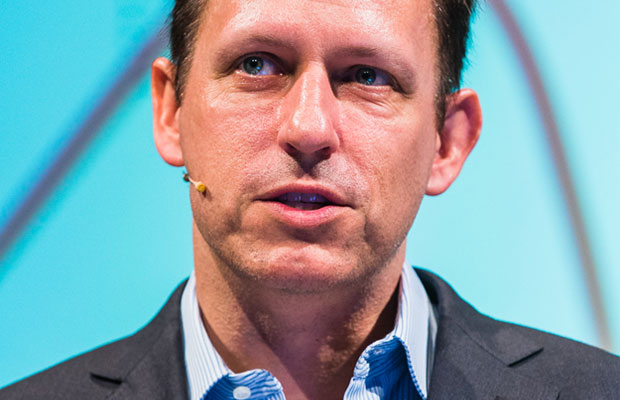 Peter Thiel, one of the few well-known Silicon Valley figures who has given Republican presidential candidate Donald Trump a public endorsement, on Monday reiterated his support at a National Press Club event in Washington.

He prefaced his remarks with a disclaimer.

“Nobody thinks his comments about women were acceptable,” Thiel told the gathering, referring to Trump. “I agree, they were clearly offensive and inappropriate.”

However, a vote for Trump would not constitute an endorsement of his flaws or indicate a voter’s lack of judgment, Thiel argued. Instead, a vote for Trump should be viewed as a vote against the country’s failed leadership.

Thiel’s support is based on “the big things Trump gets right,” he said — notably, opposition to free trade agreements.

Thiel earlier this month pledged US$1.25 million to the struggling Trump presidential campaign, shortly after a stream of women accused the real estate mogul of sexually assaulting them.

The accusations came after Trump denied during a televised presidential debate that he actually had engaged in unwanted sexual contact with women, including kissing them and grabbing their genitals. He had boasted of doing those things in a widely publicized conversation recorded on an Access Hollywood bus en route to an appearance, but during the debate dismissed his comments as nothing more than embarrassing “locker room talk.”

Twelve women to date have accused Trump of doing those things to them.

Thiel, a noted conservative activist and cofounder of PayPal, roiled Silicon Valley by seeming to dismiss the concerns of women. The donation was viewed as a slap in the face to an industry that has been fighting in recent years to change its image from one that fosters the success of young white males to the detriment of others, to one that is as an oasis of entrepreneurship and wealth creation.

Critics have pointed to a privilege gap that often excludes women, people of color, and older people from the tech industry, and fosters an environment that is unwelcoming and at times hostile to diverse communities.

Project Include, a nonprofit founded to promote diversity in the tech industry, severed its relationship with startup accelerator Y Combinator, where Thiel is a part-time partner, arguing that the Trump pledge ran counter to everything the organization was trying to achieve in terms of creating an inclusive and open environment in the industry.

Thiel’s donation to the Trump campaign following the revelation of his taped comments about women crossed a threshold and could not be dismissed easily, wrote Ellen Pao, cofounder of Project Include and a leading figure in the push for racial and gender diversity in the tech industry.

“While all of us believe in the ideas of free speech and open platforms, we draw a line here,” Pao wrote. “We agree that people shouldn’t be fired for their political views, but this isn’t a disagreement over tax policy, this is advocating hate and violence.”

Although he has been a vocal critic of Trump’s campaign, Y Combinator President Sam Altman stood by Thiel’s right to express his own beliefs and said he would not succumb to the pressure to oust him.

“The way we got into a situation with Trump as a major party nominee in the first place was by not talking to people who are very different than we are,” Altman wrote.”The polarization of the country into two parallel political realities is not good for any of us. We should talk to each other more, not less.”

The Thiel donation came at a very sensitive time in Silicon Valley with regard to gender discrimination issues, noted Charles King, principal analyst at Pund-IT.

Pao’s unsuccessful $16 million lawsuit against Kleiner Perkins last year exposed what many consider an unspoken truth about how women are treated in the industry.

Pao lost her case, but the trial exposed Silicon Valley’s ugly side, suggesting that “sexism, racism and ageism are more common in many high-profile companies than many people suspected,” King told the E-Commerce Times.

“Given the massive publicity and revulsion over Trump’s recorded comments about women to Billy Bush, Thiel’s contribution couldn’t have been more tone deaf or poorly timed,” said King.

Despite the vast wealth and success of Silicon Valley, the community is vulnerable to many of the very issues central to the 2016 presidential election, observed Steven Bliss, director of strategic communications at the California Budget & Policy Center.

Those issues include income inequality, a shrinking middle class, and a feeling that the top 1 percent have reaped all the gains of the post-recession economy.

“The issue is not so much that you want to see people at the very top not faring well,” he told the E-Commerce Times, “but when you have such a huge gap, you have people at the lower end of the scale running the risk of being left behind.”

The technology industry has contributed significantly to the 2016 presidential race, according to financial data compiled by Crowdpac, donating a total of about $15 million. However, that is well behind the estimated $102 million the finance and insurance industries gave, or the $45 million contributed by healthcare providers. The media and entertainment industry kicked in roughly $26 million.