When Paul Gloverfounded Ithaca Hours, a local currency in Ithaca, N.Y., more than 20 years ago, he didn’t intend to start a movement. He just wanted to give people in the town a way to invest in their community and each other, even when they didn’t have enough traditional dollars to do so. 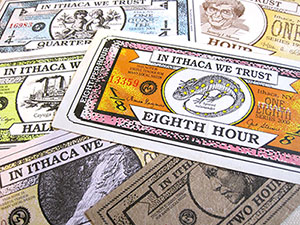 “I saw that many Ithacans had skills and goods to offer, or wanted to start businesses, but that there were not enough dollars to meet these local needs,” Glover told the E-Commerce Times. “So I realized that if we were going to have enough money, we’d have to print it ourselves.”

He published a list of 90 “pioneer traders” and established the value of one Ithaca Hour as US$10. Within a few years, the system had thousands of traders — among them 500 businesses, including a bank, a hospital, the public library, restaurants and movie theaters.

After eight years, Glover transferred the system to an elected board of directors. Today, Ithaca Hours remains one of the strongest and most well-known local currencies in the U.S., with more than $100,000 worth of Hours in circulation, and Glover argues that the need for such local systems is greater than ever.

A newer alternative to traditional money is Bitcoin, an experimental peer-to-peer digital currency created in 2009 by Japanese programmer Satoshi Nakamoto. It’s considered a crypto-currency, which means that cryptography, rather than a central banking authority, is used to create and manage it.

Computers running an open source code do Bitcoin “mining,” which involves, essentially, creating new Bitcoins. People can also obtain Bitcoins by buying them with dollars through trading companies, accepting them as payment for goods and services, or receiving them as transferred funds.

The benefits of using the system include low fees, quick interactions and little inflation. Because it’s a relatively new system, however — and one that by nature is against central authority — laws, regulations, and governmental oversight have yet to catch up to it.

“It’s not technically a currency, because currencies are created by governments, and this isn’t created by a government,” said Stradling.”It’s backed by the faith in the open source code that the network is operating. It replaces and acts like a currency, but it doesn’t have the function of a typical currency.”

There are currently around 8 million Bitcoins in circulation, and they’re valued at around $30 million.

Other alternative currency models, such as “scrip” systems, are somewhat less radical. The Great Lakes Scrip Center, for instance, is a for-profit business that helps nonprofit organizations with fundraising through gift cards.

“Our customers are all moms and dads trying to support their nonprofit organization that their kids are involved in,” Dan Springer, president of Great Lakes Scrip Center, told the E-Commerce Times. “A big part of our business model is to help them achieve those goals.”

Founded in 1994, the company works with around 600 brands, 330 retailers and 16,000 nonprofit organizations in all 50 states. Its customers include schools, athletic boosters, hockey teams and churches.

The system also benefits the retailers who sell the gift cards, since it brings in new customers and increases sales.

“By participating, they’re increasing their store traffic,” said Glover. “For most of the retailers, it’s a form of a marketing expense. Most big retailers have pretty substantial marketing budgets, and they feel it’s worth doing.”