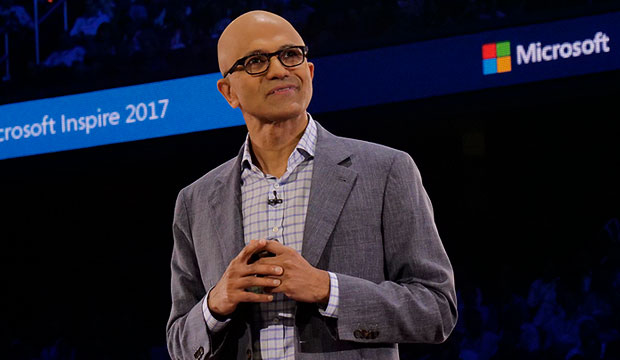 Microsoft on Monday announced several new offerings aimed at strengthening its position in the cloud marketplace, including Microsoft 365 Enterprise and 365 Business, at its Inspire partner conference in Washington, D.C.

Microsoft 365 Enterprise is designed to empower employees of large organizations to be creative and work together securely.

Microsoft 365 Business, which targets small and medium businesses with up to 300 employees, includes a console for deploying and securing devices and users in one location.

“Microsoft 365 should provide them better options and more seamless ways of buying and paying for those solutions,” he told the E-Commerce Times.

Microsoft has decided to invest US$250 million in the company’s co-sell program, which encourages its sales representatives to work with partners building solutions for Azure, and the new Channel Manager program dedicated to supporting partners’ go-to-market efforts.

Azure Stack has minimal appeal as a direct sell to SMBs, but it can be valuable to partners selling into that market, suggested Jack Gold, principal analyst at J.Gold Associates.

“For partners layering their services on top of Azure and white labeling it in the background, it could be a very big deal,” he told the E-Commerce Times.

In addition to being advantageous to partners, it could be a good move for Microsoft.

“The cost for Microsoft to hit the SMB market would be huge,” Gold noted. “There’s no reason for them to do that. “

“In the same way that partners today build their apps on Microsoft Azure, they can now also use our business applications platform to easily add sales automation, service line and operational backend functionality to their own apps,” noted Microsoft’s Althoff.

Microsoft is aiming to unite various company and channel partner resources to reflect its vision for the hybrid cloud, remarked King.

“By making partners stakeholders in that vision, Microsoft’s strategy should gain significant muscle and momentum,” he said. “Partners themselves now have a firm place at a table that initially looked like it was set for Microsoft alone. That has to leave many folks breathing easier.”

It also leaves Microsoft in a position to ride the wave of hybrid cloud computing.

“All of my research shows that 75 percent of cloud activity is going to be hybrid,” said Laura DiDio, principal analyst with ITIC.

“Microsoft is paying a great deal of attention to the things their customers of all sizes and their business partners care about,” she told the E-Commerce Times.

These latest moves could bring Microsoft closer to its ultimate goal, which is “to become the cloud company of choice in the market,” said Gold.

“They’re already doing that in the enterprise,” he added. “Anything they can do for SMBs will further move them in that direction.”

Microsoft also wants to see its days of licensing software in its rearview mirror.

“If they could get rid of on-site licensing and support today, they’d do it,” said Paul Teich, principal analyst with Tirias Research.

“On the Microsoft 365 side and on Azure, they’re doing their best to convert everybody to buy on a subscription model,” he told the E-Commerce Times.

Microsoft is changing the way it engages with its partner community.

“We have aligned all partner-facing roles to three primary functions: Build-With, Go-To-Market, and Sell-With,” noted Althoff. “This will simplify and optimize our engagement, drive increased collaboration, and foster a culture of work that puts our partners first.”

That new alignment demonstrates the complex interdependence between vendors and the channel, said Pund-IT’s King.

“Business IT markets are so large and varied that no single vendor can go it alone,” he pointed out.

“By aligning its new solutions with build-with, go-to-market and sell-with functions,” King said, “Microsoft is both acknowledging the value its partners bring to the table, and ensuring that the vast majority of them support and profit from their Microsoft engagements.”