Made in China, Sold on Amazon: The Numbers are Skyrocketing 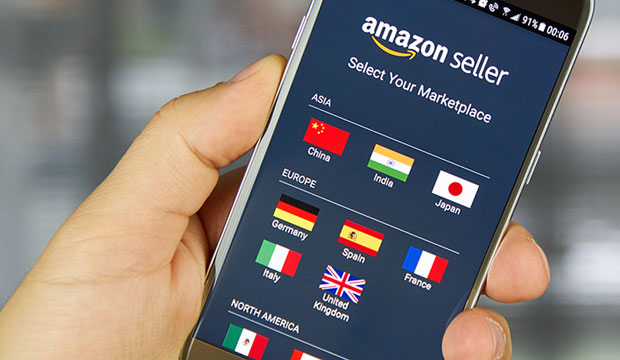 One of the most successful direct-to-consumer shopping outlets for China-based vendors outside of China’s own Alibaba e-commerce platform is Amazon. This trend has been accelerating for years.

China-based sellers represented 75 percent of new sellers on Amazon in January, according to a report by Marketplace Pulse. This marks a significant increase from 47 percent in the previous year.

This large segment of China-based sellers on Amazon has not yet impacted the gross merchandise volume (GMV) market share. Domestic sellers are responsible for most of the total sales.

Three-quarters of new sellers in the top four core Amazon markets — U.S., UK, Germany, and Japan — are based in China. That percentage is the calculated average of the four marketplaces, according to Marketplace Pulse analysis of more than 40,000 sellers that joined those Amazon marketplaces so far in 2021.

Each of those four core marketplaces along with the other three European marketplaces (France, Italy, Spain), and Amazon’s other international platforms, exhibit an identical pattern.

Amazon is the most efficient direct-to-consumer platform for Chinese brands to reach U.S. and European shoppers. Despite the Universal Postal Union’s drastic cut last year in the subsidy for low-cost small package shipping from China, the fast delivery lanes are still wide open to China-based manufacturers.

China’s trade through Amazon is not impeded despite the immediate doubling in shipping rates. That is largely due to the ability of Amazon sellers to locally warehouse their inventory through the Fulfillment by Amazon (FBA) program. FBA enables vendors to store their products in Amazon’s fulfillment centers, where Amazon workers pick, pack, ship, and provide customer service.

Both pricing and product offerings create a competitive challenge for domestic manufacturers selling on Amazon. For Perch, a commerce company that acquires and operates Amazon FBA businesses with winning products in their categories, Chinese retailers are the chief competitors. Perch acquired over 20 brands since its launch in December 2019.

With 75 percent of new Amazon sellers based in China, he sees that trend continuing. It is not a political concern, however. Especially in these pandemic times, retail sales are extremely competitive buy nature.

“So, we see more and more competition from Chinese sellers,” Jackson confirmed. To the customer, all that may matter is price and convenience. The location of the seller is not an issue.

Any Chinese seller that is a member of the Fulfilled by Amazon program will get the product to you the same as other U.S.-based shippers to stateside delivery, said Jackson.

The Chinese seller ships a supply of the products to Amazon’s distribution center. Amazon handles the sale and delivery of those China-based sellers like any other U.S.-based seller.

Otherwise, if the seller has to actually ship from China, and the consumer failed to notice the lack of Prime availability or actual arrival dates, the wait will be longer.

“The majority of products sold by Chinese sellers are FBA members and are delivered just as fast as products from other sellers,” said Jackson.

The vast majority of Amazon consumers have no idea who is selling the product. Many consumers wrongfully assume that the merchandise comes from established brick and mortar storefronts. In reality, many sellers are a single person or mother-son resellers working out of garages in or basements in far way locations, according to Jackson.

Amazon is starting to increase transparency into that scenario, he added. Right now, European customers can click a link on a third-party seller page and see the seller’s information, pictures of the store, etc. Amazon enabled that ability in the U.S. in September as well — where for some merchants, potential customers can similarly locate seller information, he said.

“Initially, many of those sellers objected because they felt that transparency exposed them. But in many cases, consumers just look at a product picture, read the details, check the price, and read the reviews before clicking on the cart button,” said Jackson.

Invariably, the product is sitting in FBA and gets the same treatment as anyone else. It does not matter if the product is made in China or anywhere else. Sometimes, if you are not paying attention to the shipping details, it literally is coming directly from China and will take weeks to arrive, he explained.

Typically, people who shop on Amazon do not understand the retail structure of the digital marketplace. Amazon has several types of sellers in addition to the home-based merchants noted above.

These merchants are resellers. They might buy products from wholesalers at lower bulk prices and resell them on Amazon at higher prices to make a profit.

Also, there are plenty of private label brand merchants. Many of the China-based sellers fill this category, noted Jackson. They are not actually buying the product someplace else but instead trademark some of what they manufacture as a separate brand.

“These sellers started as manufacturers who made the same product for multiple companies and then decided to put their own label on some products and sell them directly on Amazon,” he said.

Amazon is relentlessly known to be end-customer focused, according to Jackson. For consumers, the customer experience is all about assortment, quality, customer service, and price. For Amazon, increasing the number of sellers who can provide low prices is good for the customer.

“Sadly, there are some negative buyer reactions to China-based shippers. Those comments turn up in product reviews. Some consumers will give a one-star review just because it comes from China without saying anything about the quality of the product of the seller’s service,” Jackson added.

Some shoppers only want to buy products made domestically. That is the primary way domestic sellers can compete, according to Jackson. They can find ways to establish unique brand identities so that the customer is not just selecting on price.

“For instance, we have some merchants who show photos of their facilities made in the USA. They might have pictures of their production line in an identified state, and things like that. For some customers, that is really going to resonate,” he explained.

Overall, the prominence of China-based vendors at the end of the day benefits Amazon’s customer base, offered Rohan Thambrahalli, president of UpstartWorks. It provides them with more selections and competition.

“However, it is also a bad change because consumers need to be careful about the type of products they are buying from potentially counterfeit sellers. Proper regulatory approvals could be missing from claims made in listings,” he told the E-Commerce Times.

For example, during Covid-19, many sellers are selling counterfeit disinfecting and PPE supplies while illegitimately making kill claims among other things, he explained.

The Cost of Made in China

The continued account openings by China-based sellers have been ongoing for years and are a fact of life for anyone selling on Amazon or other marketplaces, according to Chris Bell, founder & CEO of Perch. He does not think of it in terms of being good or bad for e-commerce.

“It is just the outcome of continued globalization of e-commerce marketplaces,” he told the E-Commerce Times. “There are poor quality and fraudulent sellers based in China, the U.S., and anywhere. There are also good, high-quality sellers based in all of these places.”

One admitted disadvantage that China-based suppliers bring to Amazon may be a cost advantage over the U.S. or European-based suppliers, he said. But they also have challenges in understanding local preferences, creating product listings that appeal to local customers, and optimizing the platform to compete with other sellers.

“Consumers globally want to confidently buy a great product at a great price, and that is what good brand owners globally can offer their customers,” Bell offered.

Perch, despite constantly increasing competition in most of its product categories from China- and US-based sellers alike, has been able to hold or grow market share because the company offers great products, proven with great reviews, at a compelling price point. Those reviews are partially driven by great products and partially by great customer service if there is ever an issue, he added.

Globalization makes it harder to sell a mediocre product at high margins because of perceived scarcity, given a lack of options. Bell thinks this trend towards unlimited options through marketplaces like Amazon and lots of suppliers competing for the customer makes all of us need to constantly raise our game and stay competitive and not get lax in our approach.

“But as long as we continue to serve our customers well and stay sharp on products, cost, merchandising, and customer service, we can continue to win a large portion of consumer spend,” he concluded.

Sellers based in China are particularly good at bringing products to market at lightning speeds, noted Thambrahalli. Generally speaking, launching a new product in the U.S. can take anywhere from six months to two years, but Chinese sellers can bring a product to market in less than 90 days.

“Because of such quick speed to market, Chinese sellers will continue to impact the Amazon ecosystem solely through the sheer number of products being sold on the platform,” he said.

This means Amazon must continue to increase scrutiny of authenticating brands and vetting products to ensure they pass local and federal regulatory requirements.

Amazon must keep customer confidence in products sold on Amazon at a premium, he warned. Also, Amazon will need to work very hard to prove products are safe to use as well.