Legere Steps Back After Hurling F-Word at EFF 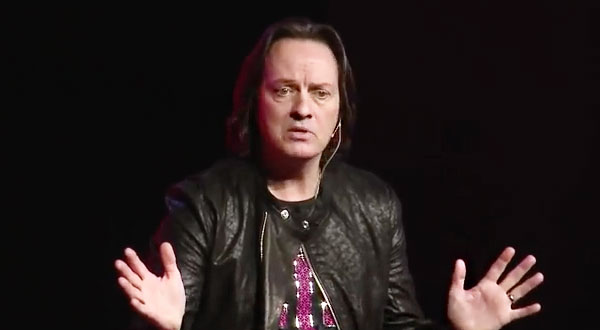 John Legere, T-Mobile’s loquacious CEO, has apologized to the Electronic Frontier Foundation for what he described as a “color commentary” that drew sharp criticism.

“I am a vocal, animated and sometimes foul mouthed CEO,” Legere wrote in a Monday blog post. “I don’t filter myself and you know that no one at T-Mobile filters me either (no, they don’t even try).”

While unapologetic for his demeanor, Legere did offer a mea culpa for “offending EFF and its supporters,” noting that EFF is an organization that fights for consumers.

The apology came after Legere posted a not-safe-for-work Twitter video rant in response to the Electronic Frontier Foundation’s report that T-Mobile was throttling data delivery to customers of its almost unlimited Binge On program.

When it launched the Binge On program last year, T-Mobile promised that customers’ use of video websites, including Netflix, would be optimized without counting against predetermined data caps.

In its report released last week, EFF claimed to have tested T-Mobile’s optimization technology by using a T-Mobile 4G LTE phone to access a video that it posted on one of its servers. EFF staff tested it several ways: video streaming using HTML5; downloading the video to an SD card on the phone; downloading the video using a different file name to indicate it was not a video file; and downloading a completely non-video file.

EFF claimed the test showed that Binge On throttled all HTML5 video streams to 1.5 Mbps, even when the phone could support faster video.

Incoming From All Sides

Google previously had alleged that T-Mobile was throttling YouTube videos, which perhaps prompted Legere’s live question-and-answer Twitter session on the issue. After EFF and its supporters took the opportunity to raise some pointed questions, Legere posted his angry response, essentially questioning the EFF’s credibility and its backing.

“Who the f*ck are you EFF, why are you stirring up so much trouble, and who pays you?” he asked.

Both T-Mobile and EFF declined to comment for this story.

“Legere, it seems, was less happy to engage with us,” wrote Rainey Reitman, activism director at EFF, in a blog post last week.

Legere attempted to set the record straight on Thursday — the same day T-Mobile announced plans to add 14 additional video streaming services to Binge On, including PlayStation Vue, the History Channel and others, for a total of 38 streaming services.

Since Binge On’s launch, customers were watching 12 percent more video, Legere said, adding that one video service saw a 66 percent spike in use among customers who were not on unlimited high-speed plans. He questioned why special interest groups — as well as YouTube’s parent, Google — were offended by the service, and again denied T-Mobile was throttling speeds.

“That’s a game of semantics, and it’s bullsh*t,” Legere said.

The practice of throttling data has grown as an issue of concern over the past couple of years, observed Craig Settles, an independent technology analyst.

ISPs and cable companies are making claims about the amount of data they can deliver, and when they can’t back up those promises, “you’re kind of screwed,” he told the E-Commerce Times.

“To react the way T-mobile did is just silly,” Settles remarked. “What EFF is doing is basically calling out the thing [that] consumers and small and medium-sized businesses are saying.”

The Internet Association last month accused T-Mobile of using its “streaming optimization” plan to throttle back all video in a way that was not related to network traffic or the customer’s data plan.

“Reducing data charges for entire classes of applications can be legitimate and benefit consumers, so long as clear notice and choice is provided to service providers and consumers,” noted Michael Beckerman, CEO of the association. “However, a reasonably designed zero-rating program does not include the throttling of traffic for services or consumers that do not participate.”

The FCC last month sent letters inviting T-Mobile, AT&T and Comcast to discuss their respective new service offerings, all of which offered the “zero-rating” technology that exempted video from counting against data caps.

The Open Internet order does explicitly ban usage-based pricing or zero-rated plans, according to the FCC. The letters are not part of an enforcement action, but rather are intended to open up a broader discussion of the plans and the larger broadband marketplace.