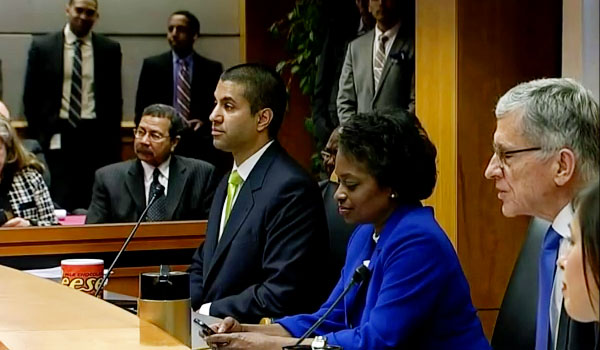 In the introduction to the some 400 pages of new rules, which cover both wired and wireless broadband, the commission stated its “carefully tailored rules” would prevent specific practices that are harmful to Internet openness, such as blocking, throttling and paid prioritization.

The new rules establish a strong standard of conduct designed to prevent the deployment of practices that would harm Internet openness, the FCC said. They enhance existing transparency rules to ensure that consumers are fully informed as to whether the services they purchase are delivering what they expect.

“For over a decade, the commission has endeavored to protect and promote the open Internet,” FCC Chairman Tom Wheeler observed.

“FCC chairs and commissioners, Republican and Democrat alike, have embraced the importance of the open Internet, and the need to protect and promote that openness,” he continued. “Today is the culmination of that effort, as we adopt the strongest possible open Internet protections.”

Not all commissioners agreed with the chairman’s assessment of the new rules.

“The Internet has become a powerful force for freedom, both at home and abroad,” said Commissioner Ajit Pai, “so it is sad to witness the FCC’s unprecedented attempt to replace that freedom with government control.”

The “government control” Pai is referring to is the FCC’s reclassification of broadband as a telecommunications service under Title II of the federal Communications Act of 1934, a move that gives the commission the kind of broad power used to regulate phone services during the days of Ma Bell.

“Today a majority of the commission attempts to usurp the authority of Congress by rewriting the Communications Act to suit its own values and political ends,” Commissioner Michael O’Rielly declared.

“While I see no need for Net neutrality rules,” he added, “I am far more troubled by the dangerous course that the commission is now charting on Title II, and the consequences it will have for broadband investment, edge providers and consumers.”

Those consequences, according to opponents of the new rules, include less investment in broadband, more red tape for edge providers trying to introduce new services, and bigger broadband bills for consumers.

The FCC late last month adopted the new rules by a 3-2 vote along party lines, but the final version was not made available until Thursday. However, the essence of the rules does not appear to have changed.

“This is what we expected,” said Christopher Lewis, vice president for government affairs at Public Knowledge.

“It’s a really strong order, and the chairman is to be congratulated for his work,” he told the E-Commerce Times.

“I haven’t found any surprises,” said Doug Brake, a telecom policy analyst with ITIF, the Information Technology & Innovation Foundation. “Much of it is as most people expected.”

The commission has taken an all-or-nothing approach in many areas, such as prioritization, Brake told the E-Commerce Times.

For some kinds of Internet traffic, such as video conferencing, prioritization may make sense. However, “they’re forgoing a more subtle approach toward prioritization,” Brake said.

“It seems like a big land grab for the FCC, without any real clarity for the people building out these networks,” he added. “It’s going to be picked apart in the coming days, and it’s going to have a hard time on some of these issues in the courts.”

It’s widely believed that the courts — which have nixed two previous sets of open Internet rules adopted by the FCC — ultimately will determine if the latest set can pass legal muster.

However, there are some who would like Congress to address the issue so a protracted legal battle might be avoided. For example, Rep. Marsha Blackburn, R-Tenn., last week filed a bill to block the new rules from taking effect.

“I’m hopeful that now we have a document, the Democrats will have a touchstone to work off of and we can have a compromise on the Hill,” ITIF’s Brake said.

“Of course, I’m not holding my breath for Congress to act,” he added, “but I think that would be the best solution. The Net neutrality advocates should realize that they have more leverage now than they’ve ever had to get Congress to act.”