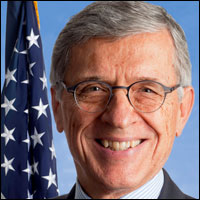 Wheeler’s proposal would provide a mechanism for creating new ways to access video content, whether through a competing device, or through an app or other software that would function as a device, thereby unlocking wider access to programming for consumers. A vote is expected on Feb. 16.

The proposal calls for multichannel video programming distributors — that is, cable and satellite TV service providers — to share certain information with developers of new devices. That information would include services available to the consumer, as well as information about what devices were allowed do with content, such as recording shows. They also would be required to provide access to the actual content.

On the other hand, it acknowledges the importance of protecting copyrights, preventing theft and honoring contract terms.

Ninety-nine percent of cable customers are locked into their set-top boxes because cable and satellite providers have locked up the market, according to Wheeler.

Consumers pay an average of US$231 a year in rental fees for set-top boxes, which totals about $20 billion per year for all cable and satellite customers, his proposal notes.

The consumer cost of set-top boxes has risen 185 percent since 1994, to $7.43 per month, while the cost of computers, televisions and mobile phones has dropped about 90 percent since then, it says.

Wheeler’s proposal has drawn praise as a long-overdue move to spur competition among the big cable and satellite providers, and give consumers the opportunity to make their own choices about where they get their content.

With the current system, “you’re stuck in a consumer-be-damned relationship from the get-go. Any time the cable company wants to increase your fees, you have no leverage,” independent analyst Craig Settles pointed out.

“If you look at the electronics of it all, you realize there isn’t a whole lot of high tech in that tech box to justify the rental fees over several years, or even several months,” he told the E-Commerce Times.

The proposal is an interesting one, coming during the presidential election cycle, observed Charles King, principal analyst at Pund-IT.

The $20 billion in set-top box rental fees are “essentially bogus charges,” he told the E-Commerce Times.

The plan will face vigorous opposition, King predicted, as “coming on top of steadily declining subscribers, cable companies must feel like their practice of charging a bundle for ungainly, consumer unfriendly bundles looks to be in serious jeopardy.”

However, it’s likely the writing is already on the wall.

The FCC proposal will help to unleash competition that could save consumers billions of dollars and create opportunities for independent, minority and other voices to get their programming in front of viewers, noted Public Knowledge.

“The video marketplace has been slow to respond to the changes in business models and technology that have swept through other media,” noted John Bergmayer a senior staff attorney at Public Knowledge. “In part this is because many incumbents control content, distribution and the devices people can access programming on.”

However, the Future of Television Coalition a newly formed organization with backing from AT&T, Dish Network, the Motion Picture Association of America, and other industry firms — blasted the proposal, saying it would render licensing agreements and other protections for the industry useless.

Consumers already have plenty of choices for accessing content on a broad range of devices, the group argued, and Wheeler’s proposal amounts to a solution in search of a problem.