Conducting business in these virtual worlds is only possible by implementing an efficient payment environment, which includes the introduction of a virtual currency and payment mechanisms.

It has to be defined how the virtual currency can be acquired, for instance, by buying the virtual currency with real money or by earning it within the world. Second Life, for instance, installed a currency exchange that is called “LindeX.” Users can easily exchange real money into Linden Dollars and vice versa. At the same time, Linden Dollars can be earned within Second Life by selling virtual goods. It is informative to analyze why Second Life has introduced its own currency and free convertibility to real currencies.

A virtual world can be described as a computer-based simulated environment that allows its users to live in this world and to interact with each other through avatars. The hype about the virtual world Second Life has quickly eclipsed other virtual worlds. However, online games like “World of Warcraft,” relationship platforms such as Cyworld and other platforms like Active Worlds are notable alternatives. Here’s a rundown on these three:

The development of a new payment mechanism within virtual worlds is influenced by consumer/business needs and generic factors. As a consequence of this, a new virtual currency and exchange were created within Second Life. The following factors generally play a role:

Illustration: Drivers for creating a newpayment mechanism in virtual worlds 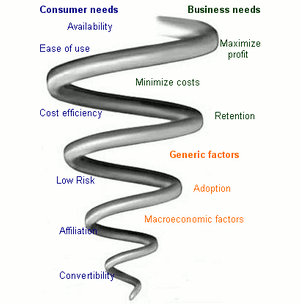 Second Life’s virtual currency can be bought and exchanged from and to many real life currencies. The exchange service is globally available and exchange transfers can be easily affected for instance with a real world credit card or from an Internet wallet account. Once Linden Dollars are purchased, these can be spent within Second Life. By applying a wallet principle, the risk of overspending and monetary implications of fraud activities are greatly reduced.

This solution is cost-efficient for the consumer, as “real world” payment instruments and corresponding costs are also decreased. The consumer feels more closely affiliated with the community as the game character is fostered. Finally, the virtual currency has to be convertible to real world currencies, which allows the consumer to retract the money from the virtual world at any time. In summary, consumers are motivated to use the virtual currency and are retained as active participants.

Sellers profit from this concept and exchange fees are paid to Linden Lab instead of paying additional interchange fees. The payment and exchange mechanism allows sellers and Linden Lab to derive revenue from the virtual economy while minimizing costs. This is an important success factor for a virtual world.

For the Second Life payment and exchange mechanism to remain stable, it is important to retain its user audience and the trust of the community in the virtual currency. For some users, it may be money that they never intend to retract from the virtual world. However, Second Life millionaires such as Anshe Chung eventually want to reap their virtual gains in the real world.

Regardless of the services offered in the virtual world, it is apparent that introducing a virtual currency and exchange is simply the most cost efficient way of handling a high volume of low-value transactions. However, this will only work if the critical user mass is achieved and if the exchange rate remains stable. Alternatively, the payment mechanism within the virtual world can be designed as a closed-loop environment that allows purchasing virtual money but does not allow to covert it back to the real world currency anymore.

Payments within Second Life are made by exchanging virtual currency from one user to another user. These virtual transactions are supported by the innate programming logic of Second Life, which is administered by Linden Lab. Thus, users do not have to use credits cards or other real world payment instruments. However, some companies plan to issue virtual loyalty cards that would grant the users discounts when shopping at certain places within Second Life.

Before Linden Lab announced a policy change at the beginning of the year, users had also been able to bring their money to virtual banks to gain interest. Money could be paid in and paid out by using virtual ATMs.

Some banks offered annual interest rates of up to 60 percent per year. Since some in-world banks failed paying funds to customers — and the virtual bank Ginko Financial even went bankrupt in August 2007 — complaints of residents accumulated. As a consequence of these developments and in order to protect its subscribers, Linden Lab banned in-world banks from the community. Effectively, a virtual world also needs certain regulations and banking rules to stabilize its economy and to avoid enormous risks caused by unregulated institutions. Linden Lab’s recent decision is a reasonable step to regain the trust of numerous Second Life residents and potential subscribers.

Other virtual worlds often do not try to imitate the real world by installing ATM machines and banks. However, the payment mechanism is usually supported by the service provider’s own platform. For instance, in “World of Warcraft,” virtual gold is exchanged to pay for goods and services.

In order to derive revenue from a business in a virtual world, such as Second Life, real world production factors have to be applied. A financial investment is initially required to establish a budget in the virtual world. Know-how and time have to be invested to buy and design property/products, which in return can be sold for a profit. The below depicts a simplified illustration.

Illustration: Funding and extracting money into and from virtual worlds 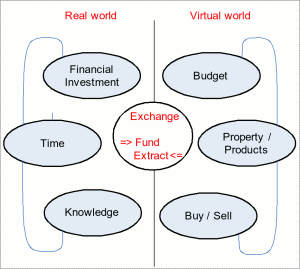 From a payment point of view, money should be fundable and extractable from the virtual world at any point in time. Credit cards are usually used to convert real money into the virtual currency in order to fund the account. In addition, increasingly more Internet wallet type of payment instruments are used to fund virtual accounts. The exchange rate generally depends on the demand and supply of the virtual currency — although certain arbitrary seller aspects exist.

In Second Life, virtual money can be extracted through the official currency exchange or independent providers. In these cases, Internet wallet type of payment instruments are suited to receive the credit in real world currency. Real world payment instruments are thus only used for entry and exit transactions, which greatly reduces fraud risks and fees which would otherwise be charged for many small micropayments.

However, some variations to this model exist. For instance, “World of Warcraft” gold is not officially sold through the platform provider but it’s sold on eBay. Some companies have specialized in generating gold within the virtual world and then to sell it for real world currency. However, an official exchange rate mechanism does not exist and is not intended by the game provider.

Other worlds, such as Cyworld, allow for exchanging real money into virtual money but not vice versa. Thus, only the platform provider and its affiliated partners sell virtual products. Participants are not drawn to this world to make a profit but for the community aspect.

The future will show how the business models will develop in the virtual arena. From a payment and legal perspective, the situation is certainly more complex when money can once more be extracted from the virtual world. As the virtual money has a certain value in the real world, it has to be determined if a bank license is necessary to safeguard and exchange the money. Furthermore, restrictions have to be in place with regard to the maximum exchange amount in order to fight money laundery transactions — or certain businesses types such as casinos have to be banned from the virtual world due to local laws that do not permit that profit is derived from that.

Businesses who intend to derive profit from a virtual world have to have a successful business model and give consideration to the payment mechanism adapted in the virtual world. Here’s a summary of what companies need to know:

Andrea Kaminski is vice president of international finance and managing director for Arvato Finance Services, a provider of financial management solutions. It is a wholly owned subsidiary of Arvato (part of Bertelsmann).
Get Permission to License or Reproduce this Article