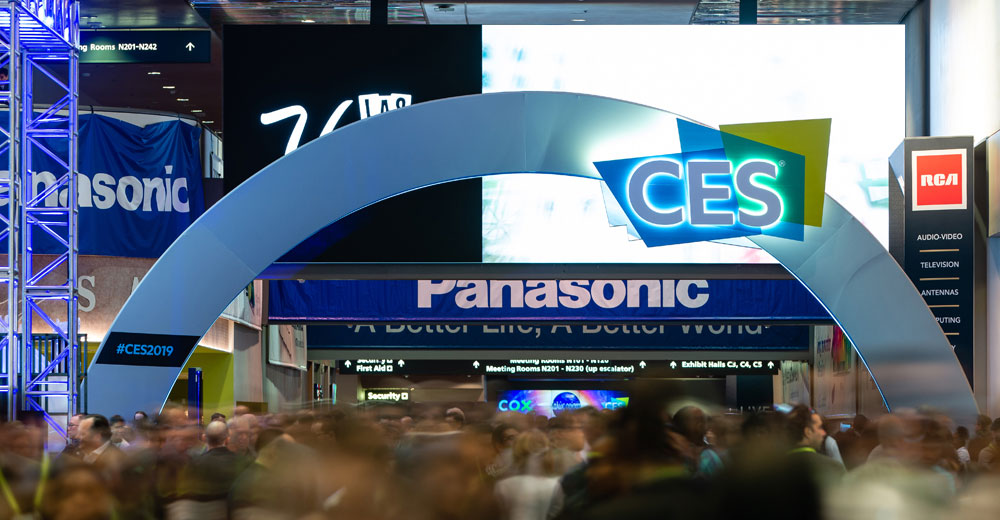 Attendees under the CES arch in 2019 | Credit: Consumer Technology Association

Next week’s Consumer Electronics Show (CES) will not be canceled despite a surge of new Covid-19 infections. Though last-minute plans have made it a hybrid event with a physical show in Las Vegas and a digital component for those unable or unwilling to attend in person.

In the weeks leading up to the mega event, numerous companies reconsidered health issues for those attending the live show due to Covid-19’s rising resurge. But CES officials insist the show must go on.

CES 2022 officially runs Jan. 5-8 with pre-show events for the media beginning Jan. 3. Last year’s CES event was an all-digital affair after CES officials canceled the physical show due to the pandemic. The last fully in-person CES show in 2020 attracted 171,268 attendees and 4,419 exhibitors.

CES officials on Dec. 23  announced some 42 exhibitor cancellations since the previous week. That drop rate was less than seven percent of its exhibit floor, according to reports.

“Our focus remains on convening the tech industry and giving those who cannot attend in person the ability to experience the magic of CES digitally,” according to the Consumer Technology Association (CTA), a nonprofit trade group that owns and produces CES.

CES 2022 will provide an opportunity for companies from around the world, both large and small, to launch products, build brands and form partnerships, officials said.

“Given CES’ comprehensive health measures — vaccination requirement, masking, and availability of COVID-19 tests — coupled with lower attendance and social distancing measures, we are confident that attendees and exhibitors can have a socially distanced but worthwhile and productive event in Las Vegas, or while experiencing it online,” according to the CTA statement.

Other firms known to have canceled live participation include Lenovo, Microsoft, Google, AT&T, John Deere, TCL, T-Mobile, BMW, General Motors, TikTok, Pinterest, and Intel. Smartphone brand OnePlus has also canceled an in-person event in Las Vegas that was set to coincide with CES, according to reports.

CES 2022 planners were already cognizant of a smaller conference this year because brands and tech companies were hesitant to fully staff in-person events. But the surge of new infections from the omicron variant is forcing planners to consider more drastic efforts amid numerous high-profile cancellations from big-name participants.

As a result, CES 2022 might draw only 20-to-25 percent of its usual physical attendance, according to some reports.

Those who do attend in-person events at CES 2022 must comply with strict health precautions. They include proof of vaccination, mask-wearing, and on-site Covid testing.

CES is asking attendees to test themselves for Covid within the 24-hour period prior to entering one of the exhibition venues. Social-distancing measures will also be in place.

CTA said it is also working with leading health experts in Nevada who support the best practices set for the CES gathering.

“With the recent climate, many people have been working remotely and creating virtual relationships. That is okay; the work gets done, but for me, nothing is better than meeting in person,” said physician Tony Slonim, president and CEO of Renown Health in Reno, Nev., one of the nation’s most innovative and progressive health systems.” His comments were included with CTA’s written response to TechNewsWorld’s inquiry.

“CES 2022 brings together progressive thinkers and energetic pioneers who are passionate about bringing technology to the world and improving lives. That has never been more important than it is today. The good news is we are now more prepared than ever to keep people safe, which is the top priority for CES,” said Slonim.

The Consumer Technology Association, area hotels, conference venues and the City of Las Vegas have worked diligently to put every contemporary safety practice in place to ensure a healthy and successful in-person meeting this year, he added.