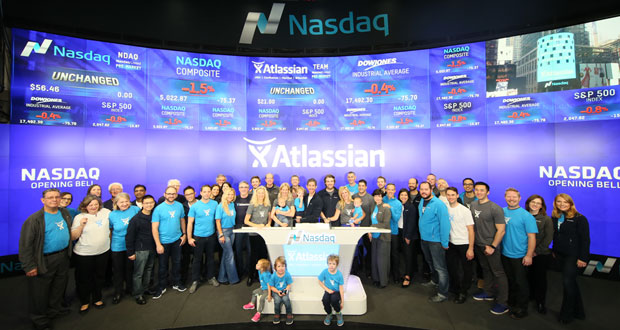 Atlassian last week exceeded expectations with its initial public offering, beginning trading at more than US$27 per share, about 30 percent higher than the $21 issue price.

That means the company — trading under the ticker “TEAM” — was valued at about $5.6 billion Thursday.

The company, founded in 2002, is best known for its Jira and HipChat products.

It has been profitable for the past 10 years. Code.org and The Daily Telegraph are among the 50,000 organizations in 160 countries using its products.

“Transitioning to a public company won’t change that mindset,” he told the E-Commerce Times.

Other Atlassian’s products include Confluence, FishEye, Crucible and Bamboo.

The company charges $10 a year for up to 10 users on Jira Software, Jira Core, Capture for Jira, Confluence, HipChat Server, Team Calendars for Confluence and Bitbucket Server. That $10 gets 50 users on Crowd, 10 committers and five repositories on FishEye, five users on Crucible, up to three agents on Jira Service Desk, and 10 plans and unlimited local agents on Bamboo.

Server licenses are perpetual except for HipChat Server, which is an annual term license starting at $10 for 10 users.

In addition to its flat pricing structure, the company uses an e-commerce model and doesn’t have a sales or marketing team.

“Our products … make a huge impact on [users’] organizations, and when something transforms your work for the better, you use it, you share it, and you take it with you to your next company,” he continued. “We think [that approach] will take us to the next level.”

Now the company has gone public, it’s subject to the demands of Wall Street, pointed out Mike Jude, a program manager at Frost & Sullivan.

“It won’t be good enough to just be profitable,” he told the E-Commerce Times. “They will have to increase profitability over time. This will require more innovation and a focus on growth.”

Swimming Against a Dismal Tide

This has been the worst year for venture capital-backed IPOs since 2010, according to Fortune. To date, 79 VC-backed firms have raised $9.2 billion in the United States, including the $462 million Atlassian raised.

Atlassian did well because “they’re printing green ink and lots of it,” ventured Laura DiDio, a research director at Strategy Analytics.

“The company’s profitable … in stark contrast to many other highly touted IPOs from the dot-com era to the present day,” she told the E-Commerce Times. It has more than 5 million monthly active users and a “very impressive client roster of Fortune 1,000 accounts, including Visa, Facebook, Salesforce and eBay.”

“Generic ideas don’t resonate anymore, but good ideas do,” he said. “The way you prove you have a good idea is to make money. That’s what tech companies need to understand.”

Atlassian will have to be more image conscious and marketing driven, DiDio predicted.

“As long as Atlassian continues to succeed, it will only have to make minimal changes to its strategy,” she said, but “it will be facing a lot of scrutiny regarding its technology, business and financial decisions and be second-guessed and have its partnerships, alliances and marketing initiatives analyzed or criticized.”