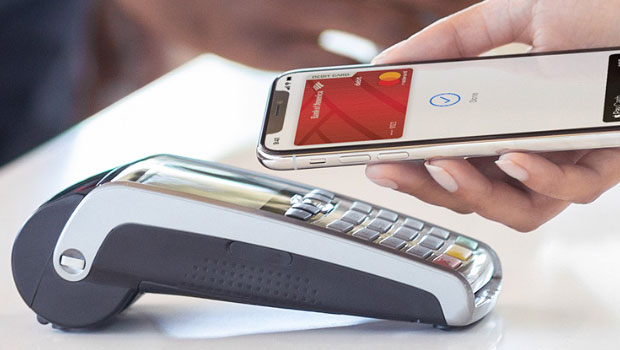 With those additions, 74 of the top 100 merchants in the United States, and 65 percent of all retail locations across the country, now support Apple Pay, the company said.

Apple Pay has begun rolling out in Target stores and will be available in all 1,850 of the chain’s locations across the U.S. in the next few weeks.

More than 245 Hy-Vee stores, and all of Speedway’s approximately 3,000 locations across the Midwest, East Coast and Southeast, already accept Apple Pay.

Over the next few months, Apple Pay will roll out to more than 7,000 Taco Bell and 2,200 Jack in the Box locations.

The announcements build upon the gains Apple Pay made last year. In 2018, Costco rolled out Apple Pay to more than 500 warehouses; CVS Pharmacy implemented Apple Pay at all of its nearly 8,400 standalone locations; and 7-Eleven launched Apple Pay at 95 percent of its nearly 12,000 stores in the United States.

“This gives Apple another big push ahead,” said Rebecca Wettemann, VP of research at Nucleus Research.

“The battle is clearly on with Google, Apple and Samsung, and a key field in that battle is territory — the number and type of places that accept payment,” she told the E-Commerce Times.

Apple Pay accounts for 77 percent of mobile payments among debit card users, according to the Auriemma Consulting Group.

That is probably because of demographics, noted Anita Solaman, director of Auriemma’s Debit Management Roundtable.

“Apple users skew younger, and younger consumers are more likely to be debit users,” she said.

There are “hundreds” of mobile pay options, including gift cards and PayPal, he told the E-Commerce Times.

Mobile payments “are key to enabling commerce and collecting data,” Wang noted, and “Apple Pay brings a richer context that may impact the market for P2P payments.”

Expanding Apple Pay is a plus for merchants because “convenience trumps fees,” he suggested. Further, the potential for lower transaction and other fees, makes it attractive to both large and small etailers.

Further, payments “are as sticky as social networks,” Wang remarked.

Merchants long have been disgruntled by the fees they have to pay card issuers. Several U.S. retail chains — including 7-Eleven, CVS Health and Target — formed the Merchant Customer Exchange back in 2014, which offered its own platform, CurrentC.

CVS had planned to roll out CurrentC to 110,000 locations nationwide in 2015, but that didn’t happen. In June, the short-lived exchange shut down, and JPMorgan Chase purchased the technology platform.

Accepting Apple Pay is easy and inexpensive now. Companies such as Square offer technology for a few hundred dollars that lets iPads be used as POS systems, accepting both Apple Pay and credit card payments

“Apple, Google and these other companies want to make it so easy to buy something that you won’t have to mess around with payment,” he told the E-Commerce Times. “They aren’t there yet, but they have the right idea.”

“The only way all of this stuff will catch on is to have a universal interface, as credit cards do,” Jude suggested. A common standard has to evolve, and using the mobile payment app needs to require fewer steps.

Security is another problem, he said. “If something happens to, say, Apple Pay, and the cloud is breached, and it’s mapped into all your transactions like subscription payments, you’re exponentially screwed.”

The ultimate issue with Apple Pay or Google or Samsung Pay “is not retailer support, but how users feel about security and trusting a tech vendor with their account,” Nucleus Research’s Wettemann observed.

“Broader adoption will depend on competitors focusing less on convenience and trendiness, and more on management and security issues,” she suggested, and mobile payment systems platforms also have to resolve “the human factors impacting a device that supports selfie pix and WhatsApp to access bank accounts.”