After months of planning and testing, the Internet’s No. 1 video-sharing site, YouTube, launched a new look and received mixed reviews.

The redesign eliminates one of the chief irritants to tubesters: clutter. 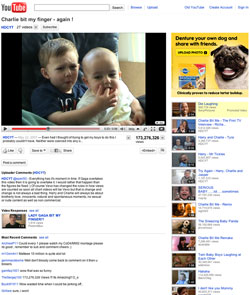 “We heard from users that there are a lot of unnecessary features and clutter that could be cleaned up,” YouTube spokesperson Chris Dale told TechNewsWorld.

“Video is the center of our universe, and it’s the center of the user’s universe, and that is much clearer in this redesign than it has been in the past,” he maintained. “We’re bringing everything back to centering on the video experience and how the users are engaging in that video.”

To avert clutter, the redesign groups all the information about a video in one place, and its detail can be obtained in a consistent way.

The action bar on a video’s page has also been cleaned up, and the presentation of controls for sharing, flagging and embedding videos streamlined.

In addition to curbing clutter, the redesign seeks to improve a videophile’s ability to find clips of interest. The service’s suggestions on what to watch next is “smarter” and based on how a video currently being watched was discovered in the first place.

“I think the redesign is an improvement,” Coree Silvera, a YouTube user and founder of Market Like a Chick, told TechNewsWorld.

“Now you can hover over it, and it shows you everything right there — you can see if it’s popular or not before you look at it,” she added.

The way YouTube handles “channels” — groups of videos uploaded by a user — has also been tweaked. Both the channel name and subscribe button are on top of the video. What’s more, there’s a button showing how many videos are in the channel. Clicking that button displays a bar of thumbnails for the videos in the channel that can be scrolled through horizontally.

“You can continue to watch your video while scrolling through all the videos in your channel,” YouTube’s Dale explained. “That heavily favors partners of ours or users who have channels and uploaded lots of videos to them.”

Not all YouTube partners agree with Dale’s assessment of the channel redesign, however.

“My goal is to get people to watch more of my videos,” Jeff Martin, associate director of search marketing for TouchStorm, told TechNewsWorld. “By putting my videos at the top and closing it by default, the user has to take action just to be exposed to any of my content. Essentially, my content is hidden.”

Another redesign issue that’s stirred up some controversy among users is the new ratings system adopted by the service.

Rather than using a star system, similar to the one favored by Netflix, YouTube has gone to a simple thumbs-up-thumbs-down scheme, similar to Facebook’s.

Much of the hoopla over the ratings change has more to do with an emotional attachment to the old system than its actual value in rating videos, YouTube’s Dale argued.

“When we did research, the vast majority of ratings [were] five stars or more,” he noted.

“So even though people thought that was a really good indicator of the value of a video, it actually wasn’t,” Dale continued.

The new rating system is more flexible than the old star system, he asserted. When a user clicks on the “like” button, a drop down menu will appear showing the percentage of people who liked the video compared to those who didn’t like it.

“That’s a really good indicator of a video’s popularity,” maintained Dale, “and, frankly, a much better indicator than what five stars was.” 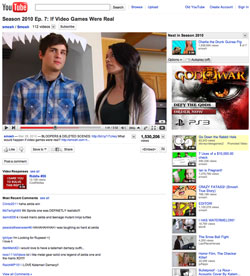 How video eyeballers comment on YouTube content is also being changed in the redesign. Comments are rated with the “thumb” system and the highest-rated comments are prominently displayed on the page. In addition, comments by the creator of a video are given priority over other commenters.

“Comments were a big user pain point,” Dale disclosed. With the new system, more useful comments migrate to the top of the stack. “A video might have 100 people writing ‘LOL,'” he observed. “That’s great, but it doesn’t necessarily tell you much.”

How the new redesign integrates advertising into the site has also caused a stir among users and pundits, though Dale discounted much of that criticism.

“I think that’s a red herring. At the end of the day, the redesign is based on user experience and user feedback,” he declared.

Doing well appears to be what the redesign is doing for the site. Early returns show overall playbacks up by 6 percent and “engagement” — comments, ratings, etc. — up 7 percent.