Xvidcap is a small tool to capture whatever goes on within the borders of an X-Windows display. It lets you capture what you do either as individual frames or as an MPEG video. 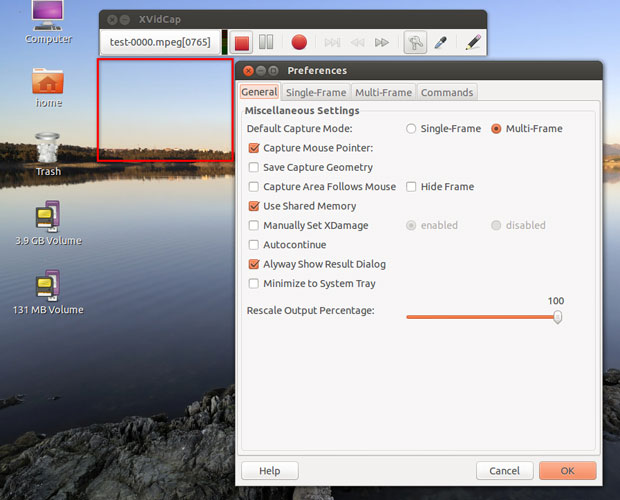 Recording your computing activity keystroke by keystroke is not a need every computer user has. However, this is an ideal tool if you need to make a visual record of the steps you take to complete a computing task. I have frequently used this type of a screen capture application to document the steps involved in using a software application. Making a video capture is often a better solution than trying to snag a series of solitary screen shots for each step of a process.

I found that taking a video screen capture is a very handy way to provide how-to instructions to clients and colleagues. In fact, if you rely on YouTube videos on how to do a particular task in a software program, you already experienced the benefits of apps such as Xvidcap.

For example, with Xvidcap I can record every menu item I open, and every mouse click I perform is captured for playback. This type of software is the equivalent of using a video camera pointed at your monitor.

Xvidcap is a very handy addition to your computing toolkit. But it can be a bit cantankerous to track down and install. However, doing so is well worth the effort. The version you should look for is 1.1.7. This is the most-recently released version as of June 10, 2011. If you can find it in your favorite Linux distro’s repository, chances are fairly good that it is a much older version.

Xvidcap is easier to use and performs more reliably than two other video capture tools I have used. Istanbul and recordMyDesktop both record screen sessions into an Ogg Theora video file.

Xvidcap’s default MPEG video format makes the file much more convenient to share with others. The Ogg Theora video file format is not playback-friendly with some video players.

For example, recordMyDesktop has several convoluted levels of basic and advanced features. These take considerable fiddling to get just right. Istanbul is very temperamental to get working. It balked on several different Linux distros I use.

One of the drawbacks to using open source products productively is a lack of user-friendliness. When that difficulty appears at the supply side, it is as if the developer is waving a red flag chasing you away. That was the feeling I got in trying to download and install Xvidcap.

I tracked down a fairly recent release on the developer’s home page, but it was only a compressed version in tar.gz format.

The best workable installation solution is to download a matching distro package from Launchpad. The choices are limited but still better than fiddling with unarchiving and compiling from the tarball.

Working with compressed files to prepare the installation is not a fun time. It almost always will send a Linux newbie running for another product. I am no newbie, but I still had trouble installing Xvidcap from the tarball download.

All went well until I got to the “make” step. The process generated a series of error messages indicating that files were missing or the process halted for some other reason.

Repeating the download and starting over met with the same results. It did not matter whether I tried the installation on AMD or Intel hardware using Linux Mint or Ubuntu.

My determination paid off. Launchpad offers a variety of .deb packages for both 32-bit and 64-bit systems. Once downloaded, installation using the Deb Pakcage Installer met with success.

The installation workout was well worth the hassle. Xvidcap has a minimalistic user interface that greatly simplifies the screen recording process. Once you set up the initial preferences, recording a computing process is literally a case of click it and forget it.

The control bar is dockable anywhere on the computer’s screen. It holds the current title, start/stop recording buttons, forward/back buttons and a few basic editing buttons.

Right-clicking the title window on Xvidcap’s control bar opens the menu options. Below this title window is a two-inch red frame. Grab the corner of this red box with the mouse pointer and drag it to border the area of the screen you want to record. Then click the red start recording button on the control bar.

I like the approach involving the red box. It is a novel method for bordering what you want to show.

This gives you the ability to record a process full screen by dragging the box corners across the monitor. Or you can load a program and show it in a window. By dragging the red box to surround only this window, the software will capture just the actions inside it.

By default, Xvidcap starts in multi-frame recording mode. Use the Menu/Preferences panel to change to single-frame mode. This lets you repeatedly click the record button to take a single-frame screen shot of the boxed area.

Another key difference in the two recording modes is the availability of audio capture. Xvidcap only records audio in multi-frame mode.

If you prefer command line interfaces, Xvidcap does not disappoint. You can bypass the GUI mode by not starting the application by clicking its icon or selecting it from the Linux application menu.

Instead, open a terminal window and enter “gvidcap” in the command line. The advantage to running Xvidcap in command line mode is access to advanced features not accessible from the GUI menu.

Enter a single hyphen followed by the desired option. These are too numerous to list here. Just check the documentation for details.

Xvidcap is a very reliable video screen capture application. Its single-frame capture mode is much better than standard screenshot apps that do not let you take multiple single shots rapidly.

This app also has a very useful built-in help file that gives you all of the basics for using Xvidcap. It is very customizable and saves the recorded session in the home folder.

Please send your ideas to me, and I’ll consider them for a future Linux Picks and Pans column.