Windows 8 vs. iPad Mini: Smackdown of the Decade?

There is probably no battle we will see that will better define the futures of the new post Steve JobsApple and Steve Ballmer’s revitalized Microsoft than this week’s dueling launches. Apple is defined asthe company that focuses tightly and drives people to its products, while Microsoft’s strength is in thebreadth of partners that collectively have the power to obliterate all challengers.

For most of the past decade, using company valuations as a metric, Apple’s approach has clearly been stronger, but in the prior decade — without Steve Jobs and with Bill Gates — the opposite proved true. This suggests either model can win. It depends on the strength of the leader and the execution of the team, and both firms are very different in this decade from what they were in the last.

This battle royal is my focus this week, and I’ll close with my product of the week: another veryinteresting Windows 8 tablet, the high-end Qualcomm ARM-based hybrid, the Dell XPS 10.

One of the issues with the “New Apple” is the inability for executives inside the company to make criticaldecisions in a timely way. This is blamed on Steve Jobs’ micromanagement style, which had people scared todeath to make a decision in case he might disagree.

So while he was there, the practice was to defer to him. Tim Cook isn’t that guy and has been pushing to get people to make their own decisions, and if it is tough for a leopard to get new spots, it must be tougher for an Apple exec to learn to make decisions again, because that isn’t exactly going swimmingly.

The end result is that things are starting to show up late, and this is likely why the iPad mini followedrather than led the Amazon Kindle Fire HD, and Nexus 7 into market, and why it will start well behindboth products. Apple does best when it leads an initiative to market and everyone chases; it has never been good as a fast follower, and this will be a problem.

However, this product hits as the market is still getting used to 7-inch tablets, so Apple isn’t out of the raceby any measure, and this could be a vastly more popular product than the full-sized iPad is because it willbe far cheaper and far easier to hold for things the iPad does well — media consumption. Work, not somuch.

Windows 8 is late for another reason. It took Microsoft a very long time to figure out that WindowsTablets weren’t selling well because they weren’t purpose-built and they were undermarketed. As aresult, Apple pretty much locked up the tablet market several years ago, and instead of scaling up themobile platform, Windows Phone 7, or rushing in a ground-up redesign (Courier Tablet), it decided tocreate an end-to-end platform, Windows 8, and that took far longer.

You’ll see the result in its final form later this week, with hardware. It is the most ambitiousundertaking Microsoft has ever attempted, and it is rumored to have the best-funded launch program inthe history of technology, vastly exceeding Apple’s traditional annual budget for this one product.

The “killer application” for Microsoft remains Microsoft Office. The ARM-based version of theproduct, which is the version that best maps to the iPad, comes with Office installed, suggestingMicrosoft has come to this battle prepared to fight.

This time Microsoft is actually making some of its own weapons in the two Surface tablets that willhit market over the next few months. This last is risky. Apple almost went under trying to beMicrosoft in the 1990s by licensing its OS, while Microsoft tried to be Apple last decade with the Zune MP3 playerand Kin phone. Those efforts, while less catastrophic, weren’t exactly successes, either.

Apple vs. Microsoft: The Battle

If this were Bill Gates’ Microsoft or Steve Jobs’ Apple against Steve Ballmer’s Microsoft or Tim Cook’s Apple, the outcomes would be a given. Bill Gates easily beat Apple without Jobs, and Jobs easilybeat Microsoft without Gates.

However this isn’t that. Cook appears to be slowly changing Apple intoa company more similar to Compaq, and Ballmer just doesn’t understand the power of software andpartnerships like Gates did.

Apple’s marketing has become almost embarrassingly bad at times — likeduring the Olympics when it made fun of Apple buyers — and Microsoft employees are begging Gatesto come back so often, he has to constantly remind them he isn’t coming back.

If either firm pulls out a big win or loses big, it will likely mean a shortened tenure for itsCEO, who would depart as a failure. Cook enters this battle in better shape in that regard — butBallmer and Gates effectively control Microsoft, so Ballmer is better protected, providing balance.In the end, the outcome of this one fight will likely determine the future of both firms — and especially,their leadership.

Wrapping Up: Calling the Win

I think it will come down to two things. If Apple can execute close to Steve Jobs’ level, it has theedge. Its offering is a vastly simpler product hitting at a critical time when consumer confidence is improvingand folks are ready to buy.

If Microsoft can fully leverage its partners and fully resources this launch cycle with compelling products, it will turn the market on its ear and come out on top. However, if either company stumbles, the other will rapidly move in to take advantage — and if both stumble, it will be a great fourth quarter for Google and Amazon.

The stakes are high. Both combatants are in this technology Thunderdome — but this time, while two mencan enter, there is a reasonable chance neither will leave. It’ll be an interesting week.

Product of the Week: The Dell XPS 10

Windows 8 has two signature products: the convertible and the hybrid tablets. I picked the leadingconvertible tablet last week, as I spoke of the Lenovo 13-inch IdeaPad Yoga. I expect the convertible class tofocus more on productivity than entertainment and will be best above 12 inches with the 13-inch product closest to the ideal. To refresh, convertible tablets have their keyboards permanently attached and will likelywork best with x86 processors and Windows 8. 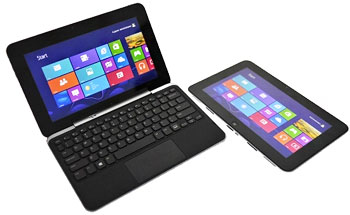 Hybrids are designed more to be iPad competitors and will likely perform best under 12 inches, with 10 inches beingthe current iPad set ideal. These products can be separated from their keyboards with advantages oflower cost — keyboards are often optional; smaller displays and ARM solutions are generally cheaper — as well aslower weight, and a much more mobile-targeted use.

The best example of this launched so far is the Qualcomm Snapdragon-based Dell XPS 10. To compete effectively with the iPad, this product needed to be well designed, have a luxury feel, and fully explore the hybrid form factor.

The XPS is Dell’s luxury line, the optional keyboard has a built-in secondary battery doubling battery life (the idealconfiguration), and it is incredibly thin. In short, for now, the Dell XPS 10 sets the bar for the hybridclass of Windows 8 tablets, and thus it is my product of the week.