Will the Tablet Follow the PC Path or the iPod Way?

There is this debate going on in the analyst community with most arguing that the tablet market is like the PC market was, and Apple will once again be overwhelmed — in this case largely by Google and Android. But a few of us, mostly me, are arguing that it is behaving much more like the iPod market, and Apple will emerge preeminent unless something big changes. Let’s see who is right.

I’ll close with my product of the week: a tool created by PC vendor Lenovo, which could be used to integrate any browser-based device — like, say, an iPad — into any company as a full-fledged and secure client.

Let’s turn back the clock to the 80s, when Apple effectively launched the PC market with the Apple II computer. In those early years, Commodore actually was the market leader in volume, and IBM — the most powerful company in the technology space by a significant margin — backed Microsoft DOS and passed Apple for No. 2.

The reason Commodore was in the lead is that it sold its box, which used a TV for a monitor initially, for well under US$300, while a complete DOS-based computer could set you back around $3,500 with a crappy black-and-white or even crappier color monitor. So businesses, not individuals, bought them — and Apple’s big push into business was the Lisa, which cost a whopping $10K and didn’t sell at all.

As the PC market matured, what gave the DOS and then Windows machines the advantage was that businesses continued to buy in excess of 75 percent of them, and they were highly standardized, both internally and externally. Eventually, the non-standard proprietary systems simply couldn’t compete on price, and even Apple eventually moved to a PC hardware ecosystem while Commodore and Atari — and pretty much every company — other than Apple — that was not connected to Windows became obsolete.

Key points of the PC’s success: A common hardware/software ecosystem (few if any royalties); business-driven sales with IT buyers; and the inability for proprietary systems to compete on cost/performance. Oh, and John Scully, not Steve Jobs, was running Apple.

Now let’s look at the iPod market — what once was the MP3 market. Its beginnings were very similar to the PC market, with a number of proprietary vendors. However, there was no business market and no IBM driving common component standards.

Microsoft initially existed with its Plays for Sure common platform but was unable to compete and then shifted to Apple’s model. Apple pretty much wiped the floor with Microsoft. Eventually, Microsoft arguably had at least one product that was better, but by then Apple had pretty much knocked out all competitors as its market share hovered between 85 percent and 95 percent, depending on whose numbers you like.

Apple came into the market late — well after S3, Creative Labs, and Microsoft were the first to work out that the ecosystem was important — and out-marketed every other player. Apple also effectively disparaged every feature it didn’t yet have, like video (it amazes me that consumers still trust the guy, given what happened, but they do). By mid last decade, it owned the spec for an MP3 player with the majority of interfaces, even in major products like cars, conforming to its unique socket. Effectively, the MP3 market became the iPod market. Apple is pretty amazing, but it can be emulated.

Key points of the iPod’s success: Consumer-driven market; owning the specification for an MP3 player (all other products compared to the iPod); vertical integration; end-to-end experience (including content); decreasing common standards (even the iPod file system was unique to Apple, which moved from FireWire to an even more proprietary port over time); royalties for accessories; and massive and effective marketing.

The Tablet Market: PC or iPod?

So let’s look at the tablet market. Currently Apple is shipping at a rate of around 20 million a year and selling out, while the entire aggregation of competitors is shipping less than 5 million, with much of the product unsold. This gives Apple better than 80 percent of the available market.

The market is consumer-driven. While there is a professional tablet market with vendors like Fujitsu and Panasonic dominating it, the numbers are relatively small, and the products uniquely built for segments like healthcare and the military. At this point, there are iPads making it into these segments, but none of these special products are making it out into consumer markets.

The iPad is a proprietary design. While it will connect via Bluetooth or WiFi, it has one proprietary port on the bottom. Most competitors also use unique ports, but some have USB or HDMI ports as well. The lack of these common ports has not, so far, hurt iPad sales.

All tablets coming to market are compared to the iPad as the gold standard and are increasingly finding it hard to showcase their unique advantages.

Key points of the iPad’s success: consumer-driven market; owning the specification for a tablet (all other products compared to the iPad as the gold standard); vertical integration; end-to-end experience (including content and apps); royalties for accessories; and massive effective marketing.

So does this look more like the PC market or the iPod market to you? iPod of course, but actually it kind of looks like the game console market as well.

There is another market that largely behaves this way and has often been dominated by one vendor. That is the game console market , which has been dominated by Atari, Nintendo, Sony and Nintendo again. Currently, Microsoft appears to have the lead, thanks largely to Kinect. This market not only showcases that doing what Apple has done can be successful, but also that the likely attack vector to displace Apple is one of content and capability — not just hardware design or price.

Maybe to beat the iPad what you need is the tablet equivalent of the Wii, Kinect or Halo. But right now, the tablet market, which is beginning to cannibalize the PC market, is looking far more like the iPod market — including Apple’s dominance of it.

Making this personal, my brother just asked for a tablet for his birthday. He didn’t care what kind, but based on his spec, only the iPad will meet his needs. Now when I can’t buy a product for someone who doesn’t even like Apple that isn’t an Apple product, we have an iPod market.

Lenovo is one of the few companies that might be able to eventually take on the iPad with its coming tablet, but initially it has something better, called the “Cloud Ready Client,” and it is teaming with Intel to bring it to market. This is a software solution that creates a secure browser-based client on any browser-equipped device — like say, oh, an iPad — and if that is what users want, then IT had generally better find a way to give it to them. This Lenovo offering does that. 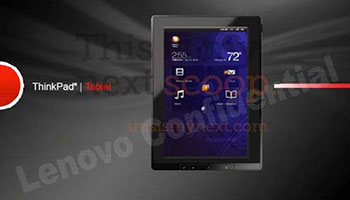 Basically, it is a cloud-based client that can serve up a variety of Windows applications (the typical standard in most companies) in a secure way, overcoming most — if not all — of the security concerns in a consumer product like the iPad.

Centrally managed and able to use a variety of authentication methods, if available — like biometrics — this product could be an invaluable bridge, particularly if an attacking wave of employees demands iPad support.

Reminds me a bit, just a bit, of the embrace and extend strategy that Microsoft has historically used so successfully. IT shops are in a world of hurt trying to adapt to an iPad world, and Lenovo’s new “Cloud Ready Client” should reduce that pain. That makes Lenovo’s Cloud Ready Client ideal as the product of the week in a week I’m talking about iPads. And it might actually do interesting things for the ThinkPad Tablet.