What the iWatch Could Be if Apple Still Had Guts

Steve Jobs was a guy who took big risks. The iPod was a big risk. The iPhone was even bigger, given that the market was dominated by companies like Nokia and BlackBerry, which had locked up the carriers in many regions. The iPad was riskier still, given what a failure the Windows tablet had been.

Now that Steve isn’t at Apple anymore, the company’s investors and folks like Steve Wozniak are losing hope for the firm.

However, with the recent patent application for a curved display, I think Apple could do something truly amazing. While I doubt that Cook will do it, I’ll suggest what Apple could create with its iWatch.I’ll close with my product of the week: a brilliant little cellphone headset from BlueAnt. 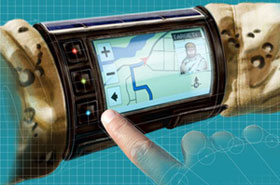 When I read that Apple had filed a patent on curved screens, I suddenly remembered a meeting I’d had a few years back when HP shared with me a project it was working on for the U.S. military.

It was a watch-like device worn on the inside of the arm. It had a screen in the size class of an iPhone that provided a ton of information. It had touch capability. As you would expect, this product was incredibly expensive, but it showcased what could be done with a smartwatch product — and given it could be used in battlefield situations, I lusted for it.

The design sported GPS capability, providing direct digital links to other squad members and headquarters for both friendly and hostile troop dispositions. It offered the capability of directing soldiers to better cover, supplies, or the rest of their team.

It was transflective and daytime-viewable, but it also was lit in a way that didn’t turn the soldier into a more visible target. It was battery-powered, of course, but with impressive battery life, thanks to the low-powered screen. (Transflective screens use ambient or reflected light.) It was impressively light and incredibly useful.

Why a Curved Screen?

Now, the reason it had a curved screen was so you could place a much larger screen on your wrist and still have the device fit inside your sleeve if you wanted it that way. A small-screened watch like most everyone else is bringing to market — and which has never really sold well — is limited to short messages, rudimentary directions — and tiny, nearly useless, pictures.

Yes, they’re fine for telling time, and I had a series of Microsoft Spot watches that provided email alerts and IM and SMS messages, but outside of exercise heart monitors, these things have been more toy than useful tool.

With a curved screen, however, you can significantly increase the screen real-estate to rival — or even exceed — the iPhone, displaying full maps, full email, and a variety of things that just won’t work on a 1×1-inch or 1×2-inch screen (which is actually bigger than many of the currently shipping smartwatch products).

Why Inside Your Wrist?

After playing with this concept, I actually wondered why we didn’t wear watches like this all the time. Check it out; if you have a watch, put it on the inside of your wrist. Now put your hands on a steering wheel, or comfortably on a table, or on the handlebars of a bike, or look at the watch while holding a glass of water in the same hand the watch is on. (This last used to be a trick to get people to pour their drink on themselves while wearing a watch the usual way on the outside of their wrist.)

What you’ll immediately notice is that the watch is far more accessible and viewable. Now put your watch on the old-fashioned way and pretend it has a touch screen. Pretty awkward, right? Put it on the inside and your other hand will find it far easier to work with. The only real time it works better to have your watch in the traditional place is when you are typing, like I am right now — but I have a clock on the screen in front of me, along with more information than I could ever put on a watch, so I don’t really need to see it.

Rather than an iPhone accessory, which is what I think they are actually going to release, imagine an iPhone mounted on your wrist. Your chance of dropping or losing it is almost eliminated. You can more easily and safely see it while riding — or driving, though I still don’t recommend it. You don’t have to dig for the phone when it rings, and you never really have to use the ringer, because when it vibrates, it is attached to you.

It can better measure fitness activity, and you could even build in a kinetic self-charger, because we move our arms a lot. If you wanted to use wired headphones, you could run the wire conveniently up your sleeve where the chord is far less likely to trip you up or catch on something, and it could even have an enhanced vibrate function for those times you want to, er, ah, give someone a massage.

Finally, it wouldn’t look like all of the smartwatches that have already failed or sold poorly in market. Or it would at least have a good chance of being unique and as amazing as the iPod, iPhone and iPad.

Wrapping Up: Why Apple Won’t Do It

Tim Cook isn’t a big risk taker. As I mentioned last week, he is practically the polar opposite of Steve Jobs and so is likely to bring out something that looks more like a traditional watch that is worn in a traditional way.

Apple fans will go crazy for it because, well, many would buy most anything from that company. However, the rest of the market, which Apple needs to recover its stock price, is likely to pass on the product. I hope I’m wrong, because I’m a huge fan of this category and would love to see most anyone do something amazing. Under Steve Jobs, Apple could — under Cook, I really doubt it.

Product of the Week: BlueAnt Q3

Products like the wrist-mounted smartphone I suggested Apple build — or any smartphone really — are best with a headset. It leaves your hands free, it keeps you from getting one of those really expensive cellphone tickets while driving your car, and it makes living with one of these big devices far more convenient. 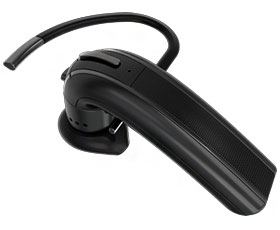 The current generation of phones is dominated at the high end by devices that are voice-activated and have sensors that change their functions. The Q3 is one of the best headsets in this class that I’ve ever tested. It was arguably the easiest I’ve ever paired. Upon initial power on, it verbally walked me through what I needed to do; buttons were intuitive — well it took a moment to find volume — and easy to use.

If you don’t use an iPhone, you can charge it with the same plug that charges your current-generation phone, and it will pair with up to three phones — handy if you test a lot of phones, which I tend to do. I have several convertible cars, and it is critical that a headset do a good job of filtering out the wind noise. This headset does a better job than most at that.

I’m using a BlackBerry and Nokia phone at the moment, so some functions that connect to Siri and Android’s voice capability were disabled. Music was actually rather nice, though I like BlueAnt’s Ribbon product a bit better for that — it connects to stereo headphones.

At US$99, the BlueAnt Q3 is one great headset, and I can’t help but make it my product of the week.