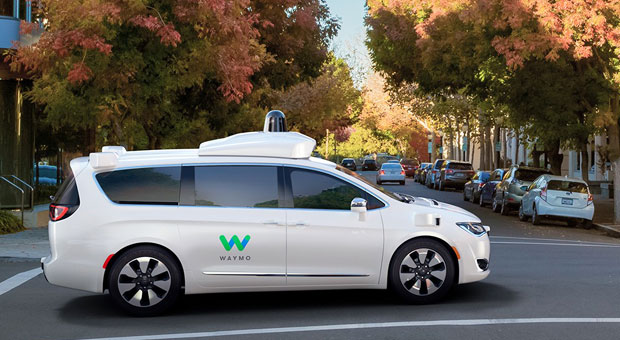 Waymo, the standalone venture that emerged from Google’s self-driving car project, on Monday unveiled a fleet of 100 Chrysler Pacifica hybrid minivans with the latest high-tech sensors, telematics, and other gear designed for fully autonomous operation.

Modifications were made to several parts of the Pacifica — including its electrical, powertrain, chassis and structural systems — to optimize it for fully autonomous driving.

With the additional computer equipment, the cars will undergo more challenging tests. They will be subjected to a broader variety of traffic and weather conditions, as well as other variables, with the goal of being ready for introduction by 2017.

“As a plug-in hybrid electric vehicle, the Pacifica Hybrid is fuel-efficient, which is important to Waymo,” he told TechNewsWorld. “Pacifica Hybrid offers a highly refined and comfortable ride experience. Using Pacifica Hybrid also gives Waymo a chance to test a different kind of passenger vehicle.

The announcement comes just days after Waymo unveiled new branding and a new team of executives, amid increasing competition to bring autonomous vehicles to the U.S. market.

The joint program team has worked to integrate the self-driving computers and other systems into the Chrysler Pacifica minivans to get them ready for use, noted Waymo CEO John Krafcik. The work has included more than 200 hours of extreme-weather testing since the companies originally announced the partnership in June.

Waymo and Fiat Chrysler have co-located part of their engineering teams to a new facility in southeastern Michigan to speed development. The companies also have conducted extensive testing at FCA’s Chelsea Proving Grounds in Chelsea, Michigan, and the Arizona Proving Grounds in Yucca, Arizona, as well as Waymo’s test track in California.

The introduction of the fully equipped Pacifica minivan is a signal that Waymo may be focusing on autonomous vehicle technology as a means of making driving more efficient and safer for families, suggested Michael Harley, an analyst at Kelley Blue Book.

“This is something deep in the heart of what a family would purchase,” he told TechNewsWorld.

The rollout of the Chrysler Pacifica minivans puts Google well ahead of its direct technology industry competitors in the race to get autonomous vehicles in the hands of the public, said Egil Juliussen, principal analyst for automotive technology at IHS Markit.

The testing of such a minivan offers Waymo a more flexible set of options when considering the kind of vehicles it wants to deploy when it makes its first commercial introduction of fully autonomous vehicles.

It may be a bit early in terms of pinning down the use case or an autonomous version of the Chrysler Pacifica, however, noted Steven Polzin, director of mobility policy research at the Center for Urban Transportation Research.

“This general direction would be consistent with the thinking of folks who are very nervous that automated vehicles will induce additional travel or have significant ’empty’ deadhead miles between trips,” he told TechNewsWorld.

“The way to mitigate that consequence is to use automation and logistics to aggregate trips — dynamic carpooling — to increase vehicle occupancy so as to offset the empty miles or induced demand miles,” he said.

“We believe that this technology can begin to reshape some of the 10 trillion miles that motor vehicles travel around the world every year, with safer, more efficient and more accessible forms of transport,” Krafcik noted at the time.

Google has spent the equivalent of 300 years of driving time since 2009 testing various prototype vehicles on the roads over more than 2 million miles. It also has conducted roughly a billion miles of testing in simulated environments. Google developed the technology with an eye to a range of autonomous technologies, from ride-sharing fleets and personal vehicles to logistics and last-mile public transport.

The next step for Waymo will be to let real people test the technology to run errands, commute to work or get home after a night out, Krafcik said.

Waymo likely will make a major push into ride-sharing, which has a huge potential for seniors, the disabled and others who cannot access their own vehicles due to physical or mental challenges.

“Waymo stands for a new way forward for mobility, which is indicative that Google is not just pursuing private car ownership model for its autonomous platform,” observed Praveen Chandrasekar, mobility research manager at Frost & Sullivan.

Rather, its focus is on the shared mobility market, told TechNewsWorld, “where Level 5 autonomous platform makes a lot of sense, especially in providing mobility for the physically challenged.”

As a standalone company under Alphabet, Waymo can operate in a much more agile way than it could as a project within Google, said Kelley Blue Book’s Harley.

Despite safety concerns and a variety of setbacks, autonomous car development has been advancing steadily.

Uber has launched real-world testing in Pittsburgh and San Francisco, with self-driving test vehicles picking up and transporting passengers in live traffic conditions. A driver is on board to take over if warranted.

Still, watchdog groups remain vigilant in making sure the technology doesn’t get ahead of public safety issues.

It is reassuring that Google abandoned plans to develop cars that lacked steering wheels and pedals, according to John Simpson, the privacy policy director at Consumer Watchdog.

However, Waymo needs to explain to the public how the cars would work and disclose what it has programmed into the secret algorithms it uses to run them, he said.

Google’s last disengagement report filed with California regulators showed its self-driving technology failed 341 times over 425,000 miles, Simpson noted, including 272 times because the software could not cope. There were 69 times when the driver intervened for safety reasons. The next report is due on Jan. 1.