For the first time in history, a manmade spacecraft has reached the outer edge of our solar system and will soon enter interstellar space.

Now about 10.8 billion miles from the sun, NASA’s Voyager 1 probe has crossed into an area where the velocity of the hot ionized gas, or plasma, emanating directly outward from the sun has slowed to zero. Those solar winds are likely blowing sideways, scientists believe, as a result of pressure from the interstellar wind in the region between stars.

Researchers currently estimate that the spacecraft will cross the frontier into interstellar space in about four years. 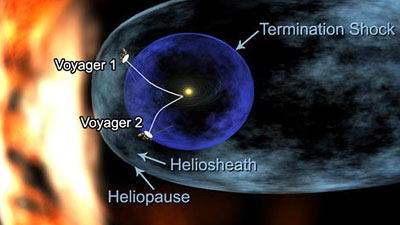 “As a surrogate for human senses, Voyager 1 is sniffing and listening and sensing the galactic auras beyond the final physical boundaries of the solar system — the grandest voyage ever made by any Earth-sprung traveler,” James Oberg, a retired rocket scientist who is now an author and full-time media consultant, told TechNewsWorld. “Even the sun has, in its eyes, faded to merely the brightest star in its full-surround heavens.”

Launched back in 1977, the Voyager 1 is one of two twin spacecraft built by NASA’s Jet Propulsion Laboratory primarily to collect data. Its twin, the Voyager 2, is not traveling as quickly and so is expected to reach a similar milestone in the next few years. Currently, it’s about 8.8 billion miles from the sun.

After visiting both Jupiter and Saturn in the late 1970s and early 1980s — resulting in a significant collection of photographs and even downloadable sounds from its travels — the Voyager 1 had been hurtling for years through what’s known as the heliosheath, which is the turbulent outer shell of the sun’s sphere of influence.

The heliosheath is at the outer edges of the “bubble” known as the “heliosphere” that encircles our solar system, created by the stream of charged particles given off by our sun. The solar wind created by that stream of particles travels at supersonic speed until it crosses a shockwave called the “termination shock.” At that point, the solar winds slow down dramatically and begin to heat up in the heliosheath.

At the outer edge of the heliosheath, separating it from interstellar space, is what’s known as the “heliopause,” which is where solar winds stop.

In December 2004, Voyager 1 crossed the termination shock and passed into the heliosheath, where it’s been traveling ever since. Using data from the spacecraft’s Low-Energy Charged Particle Instrument, scientists have been watching the solar wind’s velocity closely for signs that the heliopause was approaching.

Researchers knew that the net outward speed of the solar winds was zero when the speed of the charged particles hitting the outward face of Voyager 1 matched the spacecraft’s own speed. That first occurred in June, when Voyager 1 was about 10.6 billion miles from the sun, but researchers watched for four more months to ensure it wasn’t just a temporary phenomenon.

Sure enough, analysis of the data shows the velocity of the solar wind has steadily slowed at a rate of about 45,000 mph each year since August 2007, when the solar wind was speeding outward at about 130,000 mph. The outward speed has remained at zero since June, indicating that Voyager 1 has reached the heliopause.

That discovery was presented Monday at an American Geophysical Union meeting in San Francisco.

“When you get out this far, there’s a great deal of interpretation required as to what you’re seeing,” Paul Czysz, professor emeritus of aerospace engineering at Saint Louis University, told TechNewsWorld.

In fact, though it’s defined as being at a distance of 100 astronomical units from the sun, the actual position of the heliopause can fluctuate depending on the solar pressure of the sun, Czysz noted.

“If you have a lot of intense solar radiation and sun spots, you will see that boundary move out,” he explained. “If you don’t have as many sun spots and the solar pressure is less, you’ll see the boundary move closer to the sun.”

There is no absolute measurement as to where the heliopause actually is, in other words, making it difficult to be sure of the probe’s true whereabouts.

Then, too, there’s the difficulty of detecting the signals sent out by NASA’s probes at such remote distances, Czysz added.

“If you’re on the shore watching the surf come in, this is like detecting a wave the size of a pea,” he explained. “It’s a consistent pea, but it’s so small and so weak that we have to have these big antennas staring there and trying to pick this out of all the galactic noise.”

Once Voyager 1 does pass into the interstellar region on the other side of the heliopause, it will face “an entirely different environment,” Czysz pointed out.

“You have charged particles and all kinds of particles moving around, and that motion may be in one direction, or it may not be,” he explained.

At 100,000 light years across, the region includes almost 100 billion suns as well as “a big black hole in the middle,” he noted.

Traveling through such remote regions, Voyager 1’s “loneliness is even more poignant since all other space probes within the solar system have already been, or will be within a century or two, followed by the living descendants of their human creators — all save the Voyagers and their two slow-poke Pioneer precursors, all on solar escape trajectories that humans may not recapitulate for a thousand years, if ever,” Oberg pointed out.

“On the other hand, enhancements in human virtuosity and chutzpah could someday see Voyager 1 retrieved and returned to Earth for a place of honor in a planetary museum, even as Voyager’s own multigenerational technological descendants push outwards even faster and farther, pioneering new paths for future humans as well,” he suggested.

“That’s the future I’d prefer,” Oberg concluded, “and it’s a future made more realistically imaginable by Voyager itself