Verizon Launches a Droid of a Different Color

Amid the frenzy Friday surrounding the launch of Verizon Wireless’s Motorola Droid smartphone, another Verizon Android handset also made its (much quieter) debut — the HTC Droid Eris. 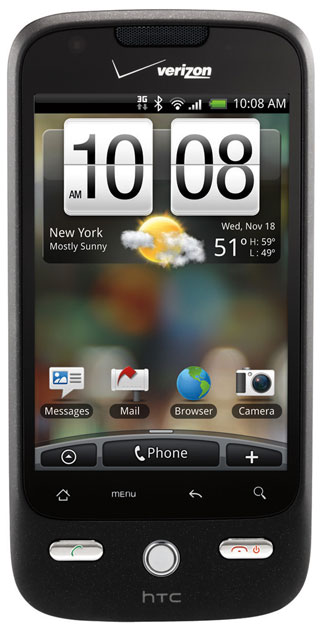 The Verizon Droid Eris by HTC

The Eris is essentially a slightly modified version of the HTC Hero, a phone Sprint started selling last month. The one-two punch powered by the Droid and Droid Eris mark the beginning of a new Android line of phones from Verizon.

About the Droid Eris

The Eris has a seven-panel home screen that users can customize with a variety of widgets, according to Verizon. It is based on Android 1.5, also known as “Cupcake,” and uses HTC’s innovative Sense user interface.

That includes the “Scenes” feature, which lets users create multiple home screens, each with different widgets and shortcuts. It also lets users access messages from various sources, including email, phone calls, Flickr streams and Facebook updates, from one contact card. The Sense user interface shapes the mobile around the individual, HTC said.

It measures about 4.5 by 2.2 by 0.5 inches and weighs a little over four ounces. The Eris has a 1,300 mAh lithium-ion battery. It offers a talk time of 300 minutes and standby time of 420 hours, depending on phone usage and the carrier used.

The Eris comes with a 5.0 megapixel camera with auto focus that offers audio and video. The camera supports several formats, including MIDI, AAC+, WAV, MP3, MPEG4, H.263 and H.264.

Essentially, the Droid Eris varies slightly from the Hero in regard to features like the the shell and the battery, though HTC spokesperson Keith Nowak told TechNewsWorld he thinks users will see the distinctions between the two. “The Droid Eris is its own device with a unique styling, price point and experience,” he said. “While customers will experience a consistent HTC Sense familiarity, the device itself is quite different.”

Why Cupcake and Not Eclair?

Why does the Droid Eris run Android 1.5 while the Motorola Droid runs Eclair — the more advanced Android 2.0? “That was a business decision by Google, Verizon Wireless and Motorola,” Verizon Wireless spokesperson Brenda Raney told TechNewsWorld.

HTC also played a part. “We didn’t believe that we could deliver the flagship HTC Sense experience that our customers know and love on Eclair at this time,” HTC’s Nowak explained. “It simply wasn’t worth the compromise of taking away key experiences that are now expected on HTC devices.”

“Android 2.0 was too new, and HTC likes to use its own interface on top, which slows its time to market with a new OS,” Rob Enderle, principal analyst at the Enderle Group, told TechNewsWorld. “With Android 2.0, HTC would likely have slipped out of the quarter, and fourth-quarter sales are critical to volume.”

All in the Family

Won’t customers be confused by the similarity in names of the two Android phones? Not really, Verizon’s Raney maintained. Both phones target the same customer base — people who want a lifestyle device that provides email, entertainment and information on a highly customizable device, she explained. However, Verizon expects the Droid Eris will appeal to younger customers.

The similarity in names is no accident — Verizon Wireless is creating a new line of Android-based devices. “The name ‘Droid’ is being used as a brand within Verizon Wireless so customers who want the great open architecture of Android will immediately know that this product line will offer you the features and benefits of a Google experience,” Raney explained.

This may signal a change in the way wireless carriers as a whole approach the handset market. “Verizon appears to be trying to create their own line of phones cutting across phone OEMs, effectively turning them into ODMs in the process,” Enderle explained. An ODM is an original device manufacturer, a company that designs and manufactures a product to the specifications of clients who put their own brands on it. OEM stands for original equipment manufacturer.

“I’m kind of surprised this didn’t happen sooner, given how much control the carriers have over the phone OEMs,” Enderle said. “This could be the beginning of turning phone OEMs into phone ODMs.”

A Bite of the Apple This December?

Could the Droid Eris be targeted at a US$99 8GB iPhone 3GS that AT&T and Apple are rumored to have in the works for the holiday season?

Verizon and HTC both sidestepped that question. “We aren’t a company that bases our business model on one device,” Verizon’s Raney said — perhaps as a swipe at AT&T.

HTC’s Nowak was more restrained. “We believe the Droid Eris offers a unique and intuitive experience not currently found in the market,” he said. “The mobile market is large and … we do not believe that one size fits all.”

A $99 8GB iPhone 3GS will probably be launched in time for the year-end shopping season, In-Stat principal analyst Allen Nogee told TechNewsWorld. “That’s the trend Apple has followed from the start,” he said. “It would seem that this is a bit soon for a price drop, but then again, the economy is lagging a bit, and Apple probably wants to give AT&T a Christmas present.”