Under the Shadow of Steve Jobs: Why Trump May Be Unbeatable

One of the frustrating things for me during Steve Jobs’ time was that most of the folks who watched Apple go from nearly dead to the most valuable company in the world didn’t seem to see anything really unusual. It was more like they were watching a great tennis player win match after match and seemingly concluding, “damn, what luck!”

As Liam Neeson says in the movie Taken, it requires a particular set of skills to do what Jobs did. While not as smooth, refined or product-focused as Jobs was, Donald Trump is showcasing that same set of skills. Like the cellphone company execs who laughed at Apple and the iPhone, Trump’s rivals seem to be making the mistake of concluding he can’t win.

What they appear to be missing is that manipulation works — whether it is used to close deals, sell products or win elections. I’ll explain and then close with my product of the week: a really interesting portable video projector that could be just the thing for outdoor — or indoor — big-screen movies. (Or for throwing things at your least-liked presidential candidate.)

If you look out into the market and compare Steve Jobs’ Apple to virtually any other existing company — be it Samsung, Ford, GE (or even Tim Cook’s Apple) — you should see a distinct difference. What you’ll see with the others is a large number of product lines, and within those lines lots of products. Within products, there may be lots of choices, like colors or even design variants.

Steve Jobs’ Apple, in contrast, offered just a handful of well-differentiated products, and with those iconic offerings you often had only one, with simple memory configuration choices.

Rather than spending a ton of money on different designs, lines, and lots of inventory folks wouldn’t buy, Apple spent a ton of money on manipulation (marketing) — that is, convincing people that the perfect device was the one that Apple sold.

The normal strategy is product saturation. Shoot out a lot of stuff, kind of like a shot gun, and hope you hit enough buyers to make your numbers. However, under Jobs, Apple’s method was forced targeting: Set up a static machine gun shooting out lots of the same product, and convince people to line up in front of the thing.

To do that, you do need to make sure the product is designed for that kind of approach. You need to focus heavily on utility, material quality, and design excellence, because you need to turn your buyers into advocates who get their friends to line up behind them. It appears that Tesla does that even better than Jobs’ Apple did, given that it just got hundreds of thousands to sign up for a car that won’t be out for more than a year.

Have you ever seen the movie 300? Even though it wasn’t that accurate, the battle strategy it points out is consistent with what I’m talking about.

Rather than running at a vastly larger force in an open valley, the Spartans engaged where the attackers had to line up and come at them individually. They effectively contained a massively larger force with relatively tiny resources by limiting the attacking force’s freedom of movement.

Apple and Tesla line up their voters in front of their limited lines and thus avoid the costs — and risks — of having to field massive numbers of different products.

Apple didn’t take that approach with the Apple TV or Apple Watch, and those products haven’t been nearly as successful as a result. Apple’s problem, in part, is that it now is creating more and more versions of the iPhone, and its financial performance is showcasing that this more common strategy isn’t as profitable.

Trump vs. a Career Politician

Whether you are talking about Cruz or Clinton, career politicians are all about hitting people where they live. They watch the surveys and shotgun out messages, often conflicting, that are designed to interest someone enough to vote for them. That approach is about breadth and flexibility of message, not focus.

With Clinton vs. Sanders, you saw Clinton constantly adjust her position. Her aim was to try to get folks to see that she wasn’t so different from the seemingly more liberal Sanders but was more electable. Sanders was less fluid, and he didn’t have the same level of support from the Democratic party, so Clinton’s strategy ensured a win (assuming there’s no outside influence, like an untimely indictment, which is very unlikely).

It wasn’t that she was a better politician; she started with an advantage that Sanders couldn’t overcome, and both played pretty much the same game.

Trump, like Jobs, plays a very different game. While he isn’t as refined as Jobs, and consequently does more self-damage, he uses primary topics consistent with Republican platforms and makes bold statements. He doesn’t present obscure (but likely more workable) plans, or spend a ton of time just blaming incumbents. He comes up with simple ways to fix problems.

The one difference is that he isn’t building the platform. He picks high-profile platforms that someone else has built, so folks are lined up behind an issue, and he states a simple fix for the problem. The more frustrated people are with the issue, the more likely he is to take it on and plug it with a simple comment. Chances are he won’t do what he says — but that doesn’t mean he won’t actually fix the problem.

You’ve likely concluded that Trump is lying, but so was Jobs. When Jobs first pitched NeXT, he ran a video tape fed to the workstation’s screens and then had people scripted to make it look like the OS actually worked. It didn’t.

When he first pitched the iPhone, it basically was a metal mock-up — it didn’t work. However, in both cases, by the time both had to work, they did. The only product that Jobs created that never really worked was the Lisa, and that was a painful lesson.

Trump mostly seems to do the same thing with his projects — but if most of the critical ones didn’t deliver, he’d be in jail rather than running for president. Like Jobs, he isn’t the one really getting the jobs done — he hires people to do that — but as long as they get done, people don’t care.

The reason Jobs and Trump win is largely because folks trained in the other models just don’t believe anything else works.

Recall the American Revolution, when a bunch of untrained farmers kicked the butt of the most powerful army in existence. (Decades later, the Zulus did the same thing with spears.) In both cases, it wasn’t because of superior weaponry (though in the Zulus’ case, numbers sure didn’t hurt). It was because the British military leaders at the time didn’t believe that any way but their way worked.

Remember how Jobs kicked all of the big cellphone firms, particularly Nokia (which was the market leader) nearly out of the market? None of them believed Apple had a chance. How many times have you heard that Trump can’t go the distance?

Now, there is one big difference between Trump and Jobs. Jobs was a micromanager, and he personally ensured perfection. If you screwed up and he saw it, you were gone — and it was public. He was crisp and practiced. Even though he was a bit of an introvert and had a history of crying when he initially didn’t get his way (seriously), he made damn sure no potential customer saw that side of him, and that execution was perfect.

Trump doesn’t do that, and he is making lots of little (and not so little) avoidable mistakes as a result. Like Jobs, what this means is the only person likely to stop Trump is Trump. Unlike Jobs, Trump hasn’t worked nearly hard enough to prevent that outcome.

Unless Trump fixes his quality-of-execution issues, Clinton will win — but likely not because of anything she did, but because of some big mistake that Trump made.

Jobs has demonstrated that the model Trump is using is by far the more powerful (and you can see this in the relative marketing spend of the various campaigns). Yet it still requires strong execution, and that is the vulnerability that is likely to decide this presidential race.

It does suggest that someone in either party who adopted this model with a Jobs’ level of execution could own the next election. That’s a lesson I doubt anyone will pick up, any more than any other tech companies have been successful at emulating what Jobs did (though Acer and Lenovo may be getting close).

Every once in a while I see and fall in love with a product that just does something better than anything else. Most of these things come from little companies that have seen an opportunity that the big firms just don’t see. A perfect example is Hoowz, which is a portable video projector/boombox for streaming content. 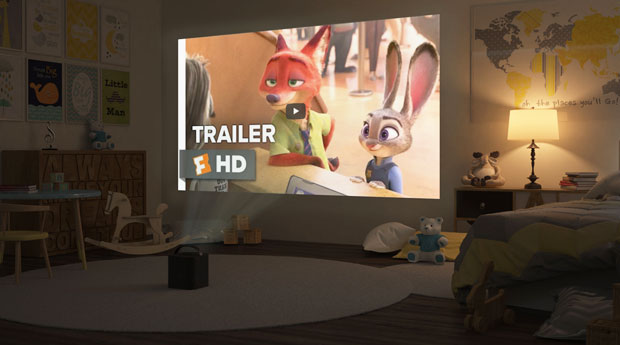 Your typical portable projector has a crappy light source, and if it has sound it only has one speaker and not much volume. Oh, and it requires you to plug it in someplace where there generally isn’t a plug.

As a result, few people buy them for anything but presenting slides, and if they do use them to watch movies it is hardly a big-screen experience.

Hoowz has full-sized speakers, an amp and a subwoofer. It is a 3/1 setup, so no surround. It can run off an internal battery, so you can pull it out and set it up in moments. It has a strong enough video response for many video games, and it has a strong enough light source to work reasonably well in a lit room — but not outside during the day.

Although it’s too big for a backpack, it could be ideal for camping trips with a motor home, as you could show the movie on the side of the vehicle at night and have a campground get-together.

It has HDMI, USB, WiFi and Bluetooth connectivity options, and you can control it with an app on your smartphone.

Pretty much everyone who tested this thing bought it, and that’s saying something for a product that costs around US$1,000 with the battery (it has a 4G option for $100 more).

It is always a kick to see a little company create a nicely done product that does a job better than any product from a huge firm, and as a result the Hoowz is my product of the week — and damned if I don’t want one.