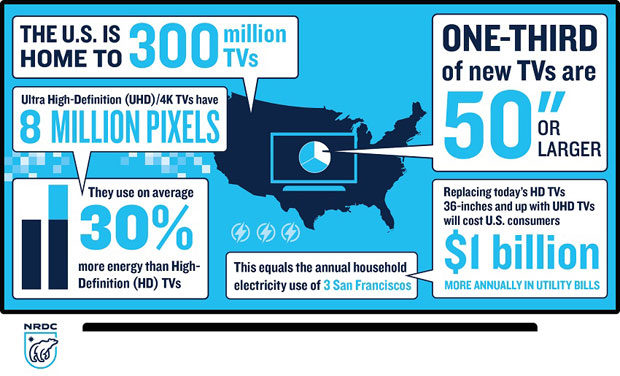 TV manufacturers could have a very good holiday season, and the good times likely will continue through 2019.

Sales of 4K or Ultra High Definition TV sets will exceed 330 million units by the end of 2019 — a sharp increase from the 2 million sold in 2013, according to data released last month byParks Associates.

However, while the price of those sets has fallen sharply and likely will continue to fall, a report released this month by theNatural Resources Defense Council contended that new UHD models use on average 30 percent more energy than their HD predecessors.

The group, which was founded in 1970, suggested that this increased energy use could add a total of US$1 billion to U.S. viewers’ annual utility bills.

Consumers most likely will buy UHD models over regular HDTVs when it comes to screen sizes 36 inches or larger, according to the NRDC’s “Big Picture” report.

UHD, often referred to as 4K, offers four times the resolution of HDTV, with about 4,000 pixels on the horizontal plane. With this higher resolution could come more power consumption.

“The combination of shifting to UHD TVs, coupled with ever larger screen sizes, has the potential to significantly increase national TV energy use,” he told TechNewsWorld. “That’s why we hope our report serves as a catalyst for the TV manufacturers to place further attention on improving the energy efficiency of the UHD TVs they will produce.”

Most consumers don’t factor in a TV’s energy use when deciding which model to purchase, said Horowitz.

For that reason, they may have a hard time telling if the model is a “real energy hog or a very efficient model,” he added.

“To help inform their decisions, consumers should look at the yellow EnergyGuide label and see how the TVs they are considering compare to each other in terms of their annual operating costs,” Horowitz suggested.

As TVs are not replaced on an annual basis and may last 10 years or more, the savings in electrical costs could be significant.

“The other advice we give to consumers is to buy a model that has the Energy Star logo on it,” Horowitz added. “That way they can be assured they are buying one of the more efficient models on the market.”

The NRDC hasn’t limited its efforts to educating consumers. The group has called on the Department of Energy to update the federal television test method as a way to better reflect conditions likely to exist in actual consumer use.

It also has suggested that the Federal Trade Commission establish a centralized online version of the mandatory EnergyGuide label with more up-to-date comparative information than is listed now.

These efforts would help educate consumers on the 10-year lifetime operating costs and help motivate buyers to choose more-efficient models, according to the NRDC.

However, since the shift from large cathode ray tube models to flat-panel sets — especially LCD and LED models — power consumption has gone down.

“This is kind of a nonissue at the moment as energy costs are also down,” he told TechNewsWorld.

Power consumption on today’s HDTV sets is actually far less than those bulky sets of 15 or 20 years ago.

A 24-inch CRT would use around 120 kilowatt-hours, while a 50-inch LED set would use only around 100 kwh, a study byEnergyUseCalculator.com found. The catch with UHD sets isn’t just the greater resolution, it’s the size.

“It is true that as sets get bigger, the more energy you will use,” Heiss told TechNewsWorld. “But you really can’t blame the TV set manufacturers.”

However, each generation of TVs does tend to get more efficient than the previous models, he added.

“If you take this report at face value, it may be true, but the power consumption isn’t a static number,” Heiss emphasized.

Not the Biggest Energy Hog

Another factor to consider is that most consumers don’t use TVs around the clock, unlike many other devices that use as much or even more power.

“This is really an unfair rap,” said Paul Gagnon, director of TV research at IHS Technology.

“The difference in power between similar-sized HD to UHD sets is about 25 percent, but that is really comparable to a 60-watt light bulb, so in relative terms that isn’t a great deal of power, ” he told TechNewsWorld.

“This is less power than a laptop or notably a refrigerator, and the latter runs all day,” Gagnon added.

The other factor is that the $1 billion figure NRDC cited would be accurate only if all 300 million HDTVs in the nation were replaced by UHD models.

“Our forecast shows 6 million UHD sets to sell this year in a market of 42 million units, so it is growing but it isn’t close,” said Gagnon.

“We don’t see a point where every TV is replaced by a UHD set, and we are nowhere close to 100 percent of American TVs ever being all UHDs,” he added.

The prices for sets will likely fall and spur sales this holiday season.

“Buy the best set you can afford and enjoy it,” Heiss suggested. “There are a lot of other ways to save energy.”