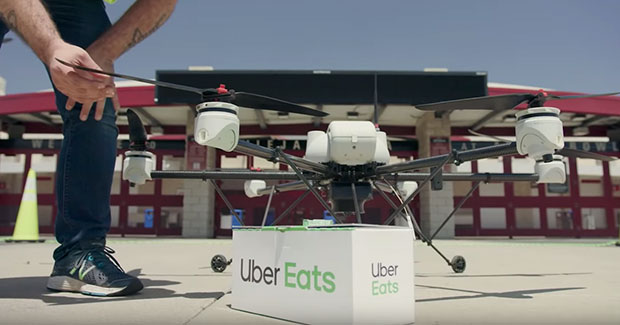 Uber Elevate, the aerial arm of rideshare service Uber, last weekannounced that it will start a fast food delivery by drone testservice later this summer in San Diego.

Delivery destinations won’t be houses or apartment buildings, however, but instead will be “designated safe landing zones,” according to reports.

Those landing zones could include the roof of a parked Uber vehicle in one scenario. An Uber courier would receive the package and hand-deliver it to the consumer.

McDonald’s is one of Uber’s partners, and it has beendeveloping special packaging to keep food hot and intact duringthe aerial portion of a delivery.

Look, Up in the Sky

When Uber Elevate’s drone delivery actually would take flight has been up in the air for some time. The Federal Aviation Administration only granted its approval last week. TheFAA has designated San Diego as one of the 10 U.S. locations for thetesting of commercial drone service.

The southern California city hasbecome a hotbed of drone research, partially due to the militarypresence there, but also thanks to weather that is reliably sunny and calm, ideal drone flying conditions.

Yet even when Uber Elevate is able to get its drone program off the ground later this summer, it likely won’t maintain its air supremacy for long.

Walmart reportedly has filed more drone patent applications than Amazon for thesecond year in a row. However, Wing Aviation, which is owned by Googleparent company Alphabet, in April announced that it also has receivedcertification from the FAA to begin delivering small packages in tworural Virginia communities near Blacksburg.

Given that drones will be subject to many restrictions –no flying over densely populated areas, for example — it’s not clear whatadvantages they offer over other delivery methods. However, deliverycould be just one part of the role drones play in the near future.

“Drones are for real in key areas of the supply chain — checkinginventory levels in huge distribution centers, flying manufacturinglines to determine when new parts are needed on the line, inspectingfar flung facilities and pipelines,” said Ted Stank, facultydirector and professor of logistics at the University of TennesseeGlobal Supply Chain Institute.

“It is coming — otherwise Amazon, Walmart, Uber, Google, etc., would notbe pushing it so hard,” he told TechNewsWorld.

“Still, I just don’t see it happening soon. There are too manylegislative and regulatory issues to work through before it can scaleto any kind of volume,” Stank added. “For the short term, I think more of a novelty in terms of last mile delivery of products.”

Even as drones are tested in San Diego and Blacksburg,another potential use in the near term is the delivery of medicalitems in areas that are difficult to reach by car or even on foot.

“There may be some application for extremely high-value products orhighly perishable ones, or having to get to very difficult-to-reachlocations,” said Stank.

U.S. startup Zipline already is utilizing drones to make blooddeliveries to remote hospitals and aid stations in Rwanda, for example.

“Using drone technology for humanitarian and commercial purposes asopposed to just recreational ones is inevitable; there is just toomuch potential to ignore,” said James R. Bailey, professor ofleadership at the George Washington University School of Business.

“To human welfare, imagine delivering a vasodilator to someonesuffering an angina episode in half the time it would take anambulance to arrive,” he told TechNewsWorld.

The same could hold true for the delivery of food and supplies to anisolated village after a tsunami or other disaster, explained Bailey. “Such applications will enjoy widespread support.”

However, there are a number of issues and challenges that need to beovercome before drones will be making routine deliveries of Big Macsand Amazon boxes.

“First, how does the drone access an order effectively and efficiently?Can it do it automated, or does someone have to load it, at cost?”pondered Stank.

Then there is the issue of liability.

“What if the drone crashes,” Stank continued, “or what if someone shoots it down to steal the order, which people have jokingly called ‘skeet shooting forprizes’?”

For those reasons and others, “the flight path to commercialapplication will be more turbulent,” suggested Bailey.

“Anything can be hacked these days, including the signals flowing todrones, and the drones could be downed for the hell of it — hijackedfor theft or cargo tainted,” he added.

Coming In for a Landing

There are other issues as well, such as where drones could land. Asnoted, Uber Elevate is opting to have designated landing zones, such ason the cars of vehicles marked with QR codes. However, that might notbe practical for all deliveries.

“Zipline literally parachutes the blood products onto hospital roofsin Rwanda, but that won’t work for most consumer goods,” said Stank.

Then there is the issue of returns, or even stolen packages on the ground.

“Certainly, information technology [including] video camera feeds canaddress many of these issues, but can it be done at low cost ? And canit be scaled for anything other than to make a cool impression andYouTube video?” questioned Stank.

“There are a lot of supply chain-related applications for drones thatdo not require last mile delivery of products. I could foreseepossible uses in ensuring compliance of Uber drivers in the passengerbusiness, location and ID of shipments for Uber Freight, and any kindof role that requires visibility into parts of the supply chain thathave typically been difficult to gain access to,” he added.

Another consideration is where exactly drone delivery could takeflight. Some cutting-edge technologies — notably autonomous vehicles –seem poised for a rollout in urban markets, but as there arerestrictions for flying over densely populated areas, cities such asNew York and San Francisco don’t seem like ideal candidates fordrones.

Thus drone delivery and self-driving cars aren’t likely to becomplementary, and yet both technologies are beingdeveloped by the same companies. Then there is the issue of developing competition to provide quick and easy food delivery.

“Uber’s business model seems off. They already have countless driverseager to swing by a McDonald’s to pick you up some burgers,” saidBailey.

“Grubhub and others do too, and delivery time in the food industry isin preparation as much as anything else — think about your lastChinese or pizza delivery,” he added.

“I get Amazon’s vision for drones, as Amazon has a comparatively smallnumber of distribution centers,” Bailey pointed out.

“Thus, their drones can return to the same origination for anotherpickup, but there are thousands of restaurants in any urban area, andthe margins on food are already razor thin, while the cost of a dronefleet will raise prices above consumers’ sensitive purchase point,”he explained.

“Is it scalable and affordable? And can regulatory and legal issues beresolved?” wondered Stank.

For many of those reasons it is more likely that drones could fill avoid in rural rather than urban markets.

“In addition, since the drone will not be transiting through populatedareas for the most part, the legal and regulatory issues, as well asthe challenges of safe operation, should be far less than in an urbanarea,” he noted.

All of these points could be a moot, as the final decision on wheredrones can make delivery rests with the FAA.

“Although some testing sites have been approved, the Federal AviationAuthority won’t be granting business licenses anytime in the nearfuture,” said Bailey. “The U.S. has among the safest national airspaces on the planet. They’re not going to compromise that for onehour delivery of a Big Mac.”