Backing up data on my multiple Linux computers has always been a grayarea for me. The process of backing up data for me boiled down toconvenience and cockiness. I thought my no-app backup procedure was abetter option. That twisted view nearly resulted in a data disasterfor me recently. 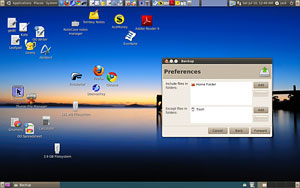 Having multiple computers all storing the same data tends to makereliance on an actual backup application seem to be a needlessredundancy. But a round of system failures put my access to backupdata at risk. This led me to search for open source software to ensurethat my data was there when I need it.

My search yielded two pleasant results. I found an impressive lineupof open source backup apps. After trying out a bunch, I’ve placed twokey backup tools at the top of my list. Deja Dup Backup Utility andLuckyBackup both are easy to use offer more than thebare-bones features typical of this software category. Both are idealchoices for personal use as well as small-business data archiving.

Dealing with data backup is really an exercise in being prepared. Inmy case, I store my primary data on a large capacity thumb drive. Iuse this USB device to access and save all my working files as well asmy data archives. On my two desktop computers, two laptops and onenetbook, I routinely copy the open files to the hard drives as I movefrom computer to computer using the syncing feature of a filemanagement program.

In theory that gives me two copies of all my stuff at all times. PlusI have two external hard drives onto which I periodically performsimilar directory-syncing operations. So trusting in the falseassumption that my data backups were under control, I did not use abona-fide backup app regularly.

So much for false assumptions. On a recent trip I lost the file-encrypted master USB storage device. That left me with just the harddrive’s content on the laptop with me. A quick fix involved buying anew USB drive and dragging all the data to it from the hard drive.

Soon after, however, a series of hardware failures struck that putwhat I thought to be a foolproof system in question. A relatively newdesktop crashed and burned. That necessitated a full data retrievalfor its replacement from one of the external hard drives.

Soon after that, not one but both laptops had their power cords shortout. That obviously caused limited or no access to the data kept asbackup on the hard drive. In both cases the batteries hadn’t chargedas part of the cords’ malfunction. I just didn’t notice thenotification icons telling me that the batteries were discharging.

As unlikely as this equipment failure scenario may seem, it happened.My carelessness and the distractions of working while traveling caughtme off-guard. I learned that even fail-safe data plans need a backup. Idid not suffer any permanent critical data loss. But if I did not havedata stored on multiple locations, that outcome would have been muchmore likely.

I almost learned my lesson the hard way. In case lightning strikeswith more force, now I am better prepared to ward off data loss woes.

Deja Dup is a simple backup tool. It reinforces the right way way ofdoing backups without being complicated to use. It builds in fileencryption, regular off-site storage and includes duplicity as theback end.

Using LuckyBackup is a lot like using a CD/DVD burning application.The menu makes it that simple to identify the source directories orfiles and the target backup location. It is a powerful, fast andreliable backup and sync tool.

I always prefer software that comes with choices. I’d rather work my way than the way a program writer thinks I might work. Both Deja Dupand LuckyBackup meet that test of acceptability.

In Deja Dup program options are set in Edit/Preferences and in thebackup panel. The options include location of directories and files,whether or not to encrypt the backed up copies, what (if any) files ina directory to exempt and whether or not to automatically back upfiles on a schedule.

LuckyBackup’s choices are a bit more extensive. A profile option letsyou create and maintain numerous backup scenarios. You also create alist of tasks for backing up in each profile and can select which onesto run from a task list window. Clicking the Advanced button in thetask properties panel exposes numerous other include/exclude options.

There is no file encryption, however. LuckyBackup is an applicationfor data back-up and synchronization powered by the rsync tool. Rsync is an open source utility thatprovides fast incremental file transfer. Automatic scheduling is alsoan option. Even better, a Cron It feature lets you run the backuproutine as a pre-selected time interval without having to load theprogram’s GUI. Pretty nifty!

A major difference separates these two backup apps. In fact, thedifference is so critical that this area no doubt will help you decidewhich one to use.

Deja Dup is driven by the concept that off-site file storage is anabsolute necessity. If you use this app, then you cannot save yourbackup file library locally. You must select a server service.

The set up is easy. Just click the Server button to reveal the choicesand the configuration panel. The choices are Public FTP, FTP (withlogon), SSH, Windows share, WebDAV, Secure WebDAV and custom location.For this last choice you must specify a valid URL. You cannot divertthe backup storage to a local external drive.

With LuckyBackup, you specify the type of backup (entire directories orselected files, for example) when you add tasks to the task list. Itis here as a task property that you specify the destination of thetargeted backup files by scrolling through a directory tree.

One failing of many backup apps is their reliability. By this I meanyou don’t know if your selected options and directions to the programresult in a successful backup operation. Often, you learn when youinstall a backup that you forgot an essential directory or somelocation was not properly entered.

By then it is too late. Not so with LuckyBackup. The program has twolevels of testing to ensure you get exactly what you intended in thebackup routine.

The task properties panel has a button labeled “Validate.” If you haveunworkable directions, the app will alert you. This feature issomewhat like the proof function before you complete your reportin tax preparation software.

A second failsafe feature in LuckyBackup is the simulation function.If you are not sure of your backup settings, just click on theSimulation button. LuckyBackup will perform a trial run that does notmake any changes.

A feature that I love and wish all backup apps included is the abilityto synchronize files and directories rather than do a complete orincremental backup operation. The Sync feature duplicates the contentsof directories with files that were most recently modified.

As a user with multiple computers and a flashdrive intermediary, this is extremely useful to me. I use the Krusader file manager’s directory syncfeature for this same purpose. But being able to have this capabilitywithin a dedicated backup app will ensure that I actually back upfiles regularly on all of my computers.

US Feds Give Mobile Apps a Go

Clustering Alone Does Not a Disaster Recovery Plan Make