U.S. automakers have spent a lot of time lately wondering whether someone can think up a solution for their economic woes. Meanwhile, one of their Japanese counterparts is using brainpower in a different way: to control the movement and direction of a wheelchair. 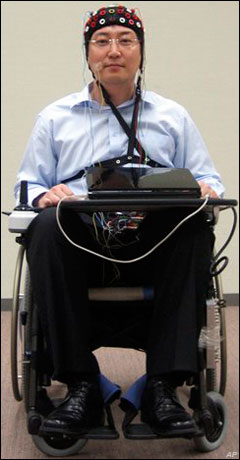 Researchers at Toyota headquarters in Japan have announced the development of a new brain-machine interface that can allow a person to start and turn a wheelchair with the use of brain waves. There’s no need for any implants or invasive surgery; a person wearing a skullcap used for electroencephalograms (EEGs) can simply think of rolling the chair or turning it left and right, and the electrical signals generated are read by a new computer program that turns the thoughts into action.

The BSI-Toyota Collaboration Center, a two-year-old project that combines government and private sector research, is charged with coming up with advancements that can help Japan aid its rapidly growing population of older citizens. However, its work on thought-control of devices and products is similar to research under way in other countries, including the U.S. and Spain, that may have additional real-world applications such as entertainment.

One mind on the U.S. end of brain-machine interface (BMI) research is that of Rajesh Rao, an associate professor of computer science and engineering at the University of Washington. While the underlying technologies on display in Toyota’s headquarters are not new, the speed at which the brain signals are analyzed and acted upon is, Rao said.

“They’re claiming the response is extremely fast, a few hundred milliseconds,” Rao told TechNewsWorld. “The kinds of signals you usually get are very, very noisy. What they’re saying is that unlike previous attempts at controlling objects, this is done at a higher level. You’re getting signals that are noisy and processing them.”

Toyota researchers, according to Rao, have apparently found a way to clean up the signals and have computer algorithms read them at a much faster rate — something closer to real-time situations.

Similar demonstrations were done two years ago by Spain’s Jose del R. Millan’, a noted expert in brain-computer interfaces working at the Swiss Federal Institute of Technology in Lausanne. Any breakthroughs in processing speed and interfaces are welcome, but for now, the Toyota example “raises the question of whether this is just a proof-of-concept demonstration or if it can be applied to a real-world environment, with a person using it to control their movement,” Rao said.

Apparently, ending the chair’s momentum is still an issue with the Japanese research team. Stopping the wheelchair in the Toyota experiment requires the use of a muscle in a person’s cheek.

The Next Few Years

It’s likely you’ll see commercial applications for BMI research in a noninvasive manner showing up first in the video games of the next five to 10 years, Rao said. That’s because the risks of failure in games don’t involve potential harm to a human being. More work needs to be done on the medical side of the issue, though.

“The promise still remains, and there’s been considerable progress made in the last 10 years in the field,” Rao said. “Now we’re getting better and better at decoding these signals … on the recording side, with better hardware to decrease the amount of noise in the [brain] signal. And we’re getting better at understanding the signals once we receive them, and the computer algorithms used. There’s progress on all these fronts.”

There’s also been progress in academic labs. Rao and his UW teams have used technology similar to Toyota’s to instruct humanoid robots to travel to a location, pick up an object and return it. Industrial uses have also shown promise — Honda is another automaker tinkering with BMI.

“We need to have both these components — academia and industry — working hand in hand. Toyota and Honda are taking up this challenge and pushing the envelope on this. It’s a very positive sign for research,” Rao said.