These Robots Can Teach Little Kids to Code 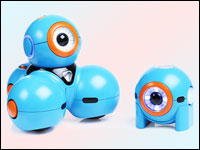 Play-i on Monday launched a crowdfunding campaign to support the development of robots designed to teach young students the fundamentals of computer programming through play.

Play-i is working on two robots, Bo and Yana, that can help teach kids as young as five basic computer science skills. The robots come ready to play out of the box, and children can interact with them using a tablet or smartphone.

Children can use the touchscreen to string together a series of commands that will direct the robot. Different sequences might allow it to sing a song or whir like an airplane. Eventually, kids can use visual programs Scratch and Blockley to create their own code.

Play-i made sure the product appealed to both boys and girls, said Vikas Gupta, cofounder of Play-i.

Children in elementary school often have equal interest in science and technology fields, but by the time they get to middle school, boys show more interest. The Play-i team worked with test groups and researchers to determine how to create a product that would appeal to girls not only at a young age, but also as they grew older.

The robots focus on languages not driven by syntax, as well as music, stories and animation that stimulate kids and help them warm up to the product, said Gupta.

So far, the company has received backing from major tech players including Google Ventures, and its crowdfunding campaign seems to be successful, as well — by Tuesday afternoon, it had reached more than US$176,000 of its $250,000 goal with 29 days remaining in the campaign.

Backers of the crowdfunding campaign can purchase Yana for $49, Bo for $149 or both for $189. Retail prices will be higher following the launch, the company said. Play-i expects to start shipping in the summer of 2014.

Children Coders Are the Future

The idea for Play-i developed when Gupta, himself the father of a young girl, read an article about computer science lessons being built into a first-grade curriculum in Estonia. When he looked for similar educational options in the U.S., he came up pretty much empty-handed.

“Computer science education has actually gotten worse in the past 20 years in the U.S., especially compared to countries like Vietnam and China that are putting a much bigger emphasis on it,” he told TechNewsWorld. “We started looking at what education tools are in the market — something that would be accessible and tangible, that could be played with — and no such product existed.”

Since computer programming is a learned skill that usually requires patience and practice, utilizing a friendly looking, high-tech robot is the perfect way to keep kids interested while they learn almost subconsciously about the coding process, said Kostas Bekris, assistant professor of computer science at Rutgers University.

“The more physical and visual the challenge is, as in the domain of robotics, the easier it becomes for someone who is learning programming to associate coding instructions with outcomes, identifying errors, computational bottlenecks and improving one’s skills,” he told TechNewsWorld.

Play-i is confidant that Bo and Yana can start to fill the void of computer programming education nationwide, Gupta noted.

“We’re hoping that the robots and other initiatives can help to make some progress in curriculum,” he added. “There aren’t enough core standards with computer science education, and as that starts to change, hopefully robots can play a role in the greater education, because now there is this hardware product that educators can use to help teach.”