There’s a New Kid on the Solar System Block 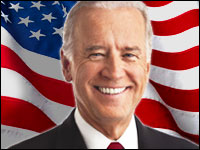 Astronomers this week reported what they believe to be the most-distant member of our solar system discovered so far.

2012 VP113, a probable dwarf planet that was found to lie beyond the known edge of the solar system, was discovered by Chadwick Trujillo, an astronomer at the Gemini Observatory in Hawaii, and Scott Sheppard, an astronomer at the Carnegie Institution for Science, using the National Optical Astronomy Observatory’s new 13-foot Dark Energy Camera on the NOAO 4 meter telescope in Chile. 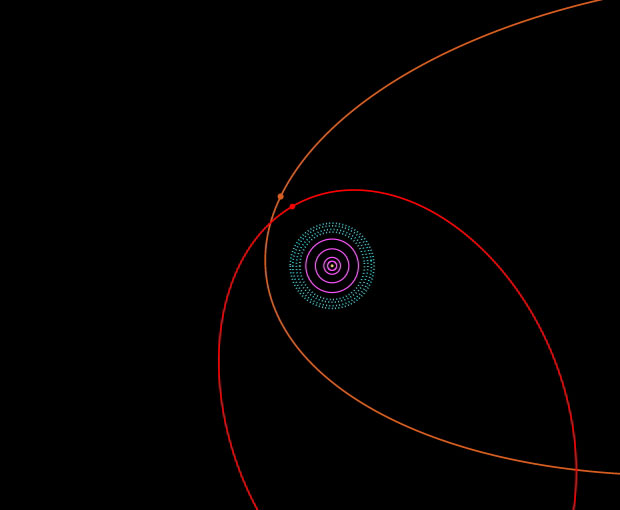 This is an orbit diagram for the outer solar system. The Sun and Terrestrial planets are at the center. The orbits of the four giant planets, Jupiter, Saturn, Uranus and Neptune, are shown by purple solid circles. The Kuiper Belt, including Pluto, is shown by the dotted light blue region just beyond the giant planets. Sedna’s orbit is shown in orange while 2012 VP113’s orbit is shown in red. Both objects are currently near their closest approach to the Sun (perihelion). They would be too faint to detect when in the outer parts of their orbits. Notice that both orbits have similar perihelion locations on the sky and both are far away from the giant planet and Kuiper Belt regions. (Image courtesy of Scott Sheppard))

DECam has the largest field of view of any 4-meter or larger telescope, giving it unprecedented ability to search large areas of sky for faint objects. The Magellan 6.5-meter telescope at Carnegie’s Las Campanas Observatory was used to determine the orbit of 2012 VP113 and obtain detailed information about its surface properties.

Though the newfound object’s official name is “2012 VP113,” the discovery team calls it “VP” for short, or just “Biden,” after U.S. Vice President Joe Biden. Down the road, after the object’s orbit has been determined, scientists will submit a name for consideration by the International Astronomical Union.

A detailed report on the researchers’ findings is published in the March 27 edition of Nature.

Our solar system consists of the rocky planets like Earth, which are close to the sun; the gas giant planets, which are farther out; and the frozen objects of the Kuiper belt, which lie just beyond Neptune’s orbit. Neptune orbits the Sun at about 30 times the Earth-Sun distance, a cosmic measure known as an “astronomical unit,” which spans roughly 150 million km.

Beyond this, there appears to be an edge to the solar system that only one object smaller than Pluto — Sedna — previously was known to inhabit for its entire orbit.

The newly found 2012 VP113 has an orbit even beyond that of Sedna, however; it’s likely that 2012 VP113 is one of thousands of distant objects that are thought to form the so-called inner Oort cloud.

Particularly compelling is that this new work suggests the potential presence of an enormous, unseen planet — perhaps up to 10 times the size of Earth — that could be influencing the orbit of 2012 VP113 as well as other inner Oort cloud objects.

“Finding a dwarf planet that goes even farther out in the solar system than Sedna is exciting news,” Mario Livio, a senior astrophysicist with the Space Telescope Science Institute, told TechNewsWorld. “When you couple that to the potential hint that the orbit is perturbed by a planet-size, unseen object, this becomes even more exciting.”

From a dynamics perspective, the existence of such objects is “not that surprising, since in the early solar system the configurations were more easily subjected to dynamic effects introduced by newly formed planets,” Livio pointed out.

At the same time, “it is precisely these types of findings that allow for refined models for the formation of the solar system,” he added.

The ‘Edge’ of Los Angeles

Indeed, “this is a very exciting discovery inasmuch as it reveals the complex character of the processes that led to the formation of our solar system and, we can infer, to the many hundreds of other solar systems that have been discovered in recent years,” agreed William Newman, a professor in the departments of earth, planetary and space sciences, physics & astronomy, and mathematics at UCLA.

“However, I take exception to the issue of trying to find the ‘edge’ of the solar system,” Newman told TechNewsWorld. “That is a little bit like trying to identify the ‘edge’ of Los Angeles or New York or isolating the ‘edge’ of a beach.

“It seems that human nature seeks to create definitions for things rather than appreciate the nature of the processes that produced them,” he added.

In any case, “what this discovery shows is that solar system evolution is an ongoing process and that we can expect to discover many more such planets as we develop a better understanding of how solar systems form throughout the cosmos,” Newman concluded.

Meanwhile, “more and more of these dwarf planet objects should be discovered as larger telescopes come online and as detector technology improves,” Scott Austin, an associate professor of astronomy and physics and director of the astronomical facilities at the University of Central Arkansas, told TechNewsWorld.

“It is likely that eventually one or more large Oort cloud objects that fit the current planet definition will be discovered,” Austin said. In the meantime, “the current scientific understanding of the structure of our solar system is outstripping the general public’s conception of eight or nine planets, an asteroid belt and a few comets.”