The Wii U Begins not With a Bang but a ‘What?’

Nintendo unveiled its upcoming Wii U gaming console and controller on Tuesday at E3, and reactions have been mixed. Nintendo’s stock fell 5 percent following the event — to a level it has not seen since before the launch of the original Wii. 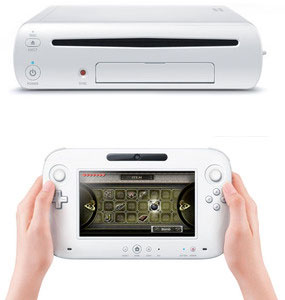 Wii U Console and Controller Prototypes

The controversy-generating Wii U controller has a 6.2 inch touchscreen and wields twin circle pads, a D-pad, shoulder buttons, twin triggers, an accelerometer, microphone, camera and a gyroscope.

Nintendo has not yet revealed many details or pricing for the console itself, which is set to ship in 2012.

Part of the reason for the stock price dip was likely the bafflement consumers experienced with the new controller. After watching the demonstration on Tuesday, many viewers couldn’t see Nintendo’s path to significant sales. It’s worth noting that Nintendo got a similar negative response when it unleashed the original Wii, which was dissed by serious gamers.

Some of the gamers who initially tried the Wii U have said the motion controller is too bulky due to the size of the touchscreen. However, reactions could change after the console is actually released.

Once gamers see what the technology is capable of, they may have a change of heart.

Nintendo did not respond to the E-Commerce Times’ request for comments by press time.

The Wii U takes advantage of recent technological improvements accompanying the influx of new tablets and smartphones. Nintendo evidently has some ideas about what game developers can do with these technologies, but for the most part, they’re still fuzzy.

“Nintendo has generated more questions than answers in its presentation of the Wii U game console and its new controller,” Azita Arvani, principal of the Arvani Group, told TechNewsWorld.

“In its rush to create excitement for its future-generation product, it may have caused more confusion,” she said. “However, the company has innovated on the Wii U controller by taking advantage of the tablet popularity. At the moment, the Wii U controller might look like a game controller has swallowed a touchscreen tablet. But Wii U will not be out until 2012, so the company will have time to update the form factor.”

The multiple control features crammed into the Wii U controller give developers some interesting new design options. Nintendo hopes that it can implement what it has learned with the dual screen innovation of its flagship handheld into the console universe.

“Having two screens, one on the controller and one on TV, can create interesting viewing and control options for the gamers, similar to Nintendo DS but on a larger screens,” said Arvani. “But they have to make sure they don’t end up creating a two-headed monster that no one would want to use. After all, the expectation bar for tablets has been set high.”

Too Edgy or Not Edgy Enough?

Nintendo is known for its experimental nature, and this could be the video game legend’s Sgt. Pepper. The addition of high definition was a necessary chess move to warp Nintendo into the present where HD TVs have become a commonplace household item.

“I think the Wii U is something Nintendo had to do. Not having a high-definition console in the marketplace was hurting its sales and its brand,” Carl Howe, director of anywhere consumer research at the Yankee Group, told TechNewsWorld.

“The idea of having multiple screens — one in each controller in addition to the large main screen — is aggressive and interesting. Multiple screens have the potential to ramp up the user experience significantly, but only if the game developers take full advantage of the capability. It’s going to require great new games to properly showcase the new console.”

Nintendo enlarged its audience with its initial Wii success, tapping into the casual gaming market. It is now easier for younger and older players to get into the game.

“I think the [Wii U] probably will succeed, if only because it targets a younger demographic not well served by the other two major platforms, Xbox 360 and PS3,” said Howe. “Never underestimate the power of a defensible niche in a mature market.”