Part 1 of this two-part series takes a look at the increasing use of robotics systems to “man” the supply chain, along with some of the benefits and challenges this operational shift entails.

Recent developments in robotics are promising to reshape supply chainfundamentals. Specifically, robotic devices are improving warehouse operations to a degreeunforeseen only a short while ago, by automatinga slew of repetitive, difficult and usually monotonous tasks. 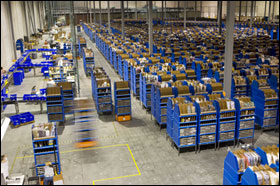 Applyingthis technology to jobs once performed or overseen by humans alsodelivers significant savings in labor, energy costs and relatedexpenses.

One only has to look as far as Zappos’ implementation of Kiva Systems robotics technology in its own warehouse operations to appreciate thesavings such as an investment can deliver: Zappos increased its ordercycle time by a factor of 4, according to Mitch Rosenberg, VP ofmarketing for Kiva.

“A lotof Fortune 500 firms are using AGVs (automated guided vehicles), whichis another form of automation, of course,” he told the E-CommerceTimes. Kiva, though, “has brought us to the point where a company canjustify making an investment of this magnitude and see a payback inthe next few years.”

That is hardly a unanimous opinion, however. Robots have been in existence for several years — and there are reasons why they have not been widely adopted in supply chainoperations, said Amiya Chakravarty, a professor of supply chain, operationsand technology at Northeastern University’s College of BusinessAdministration.

For starters, “robots are very expensive, and to make effective use of them, they haveto be in specific areas or applications where there is a good match,” Chakravarty told the E-Commerce Times.

They work best, he said, with discrete one-offtasks such as moving an object from point A to point B. “Any kind ofuse of automation is hard to make work when it must be interlinked ina system — then it becomes difficult to coordinate.”

Even for packing operations — a relatively low-level function –robots need to be augmented with human guidance, he said. “Theindustry has not gotten to the point where we can combine intelligencewith robots in an effective way.”

Ultimately, what Kiva has done is eliminate the need for humans to doa lot of walking and heavy lifting, Tom Bonkenburg, director ofEuropean operations for St. Onge Company, told the E-Commerce Times.”They’ve taken the easy stuff out of the equation, sure — but whatthey haven’t done is figure out how to get the robots to reach intothe pallet to find just the right object needed and then take thatobject to another location.”

Eventually, robots will get there, Bonkenburg predicted. “As computers getfaster and smarter, you will see them get better at identifying andthen placing specific objects.”

Assessing What Is Popular

That point is closer than some might believe, at least based onRosenberg’s description of how the Kiva robots operate. In a typicalwarehouse setting in which the Kiva systems are deployed,the robots take the pallets during the receiving part of the operationand move them to the end of the warehouse to be kept in reserve untilthe merchandise is needed.

It would be basically brute automated forceand nothing more but for this: The Kiva robots “are automatically,continuously measuring which items are most popular and moving themcloser to the pick workers,” Rosenberg said — all without humanintervention.

That raises a prickly issue — jobs lost in favorof the deployment of robots — that is bound to create controversy whentheir use takes off.

Automation may not automatically translate into jobs lost.

Most, if not all, of the tasks that robots now performstill require human oversight — and do not automate extensively enoughto replace an entire job function, he said.

Still, with some implementations, either jobs will be lost orworkers will be reassigned — or, most likely, new hires will be postponed.

That’s what happened whenproductivity increased in a local brewery due to advanced automation, noted Syracuse’s Penfield.Anheuser Bush installed several AGVs that took over such tasks asloading pallets of beer onto trucks that would then move to a bottlingstation.

The brewery “said they would be able to defer hiring becauseof this equipment,” Penfield recalled.

Of course, the alternative to that scenario would be to cease pushing forhigher productivity through the use of advanced automation, of course — essentially, to stall the march of progress.

“If we were a conveyor beltmanufacturer, no one would ask the question whether our product isreplacing jobs,” Kiva’s Rosenberg said.

The Supply Chain Gang, Part 1: Robots on the March

The Supply Chain Gang, Part 1: Robots on the March