Part 1 of this three-part series on intellectual property law in virtual worlds discusses trademark rights as applied to virtual goods. Part 2 addresses patent rights, including how patent rights can be obtained based on actions performed in virtual worlds, and whether patent rights are enforceable against virtual infringers. Part 3 will delve into copyright issues.

A patent represents a grant from the United States government to an individual for the exclusive right to make, use, import, sell, and offer to sell an invention. In order to obtain a patent in the first place, an inventor must prove to the U.S. Patent and Trademark Office that the invention is new, useful, and not merely an obvious improvement over what was already known.

The types of inventions that may be patented include machines, articles of manufacture, methods of operation and compositions of matter. Video games, virtual worlds and other types of software can be claimed as methods of operation (the processes performed by the software); machines (the computers executing the software); and articles of manufacture (the storage media on which the software is distributed).

For example, U.S. Patent No. 6,935,954, owned by Nintendo of America, is directed to a sanity system for a computer game, whereby events in the game affect a character’s sanity, which in turn affects the ability of a user to control the character. This sanity system appears suitable for any single or multiplayer game in which characters encounter scary situations. 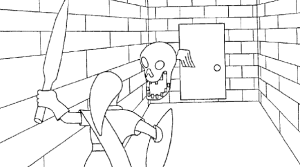 As another example, consider U.S. Patent No. 6,522,333, owned by Electronic Arts, which is directed to a method of communication between two avatars by animating an avatar concurrently with a text chat. These types of communications are employed in many virtual worlds and massively multiplayer online games (MMOGs). While there are various specifics to the patent that would need to be performed before the claim is infringed, it is not difficult to imagine a text chat in a virtual world where users type commands to simultaneously animate their characters. 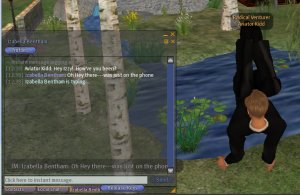 Each invention is defined by one or more “claims” in a patent. Claims are the most critical aspect of any patent, because if the claim is drafted too narrowly then it will be difficult to enforce the patent against infringers. On the other hand, if the claim is drafted too broadly, then it might be held unenforceable by a court. (Do not underestimate the difficulty and finesse required to draft effective claims. Always enlist the assistance of a qualified patent attorney when trying to obtain a patent.)

Once you have a patent, it can be used in various ways, although most patents are never formally asserted in court. Only about 2 percent of all patents are ever enforced in any way. This does not mean that the other patents were a waste of time or money.

Many companies and individuals seek patents for other purposes, including marketing, advertising, maintaining a defensive patent portfolio in case they are ever sued, using as leverage for obtaining financing, and even just for the sake of saying that they’re an inventor holding a U.S. Patent.

If you decide to enforce or otherwise financially exploit your patent, there are many different ways to do so. For example, you can attempt to generate ongoing revenue by licensing your patent to others. Alternatively, you can send out a “cease and desist” letter to an alleged infringer requesting that they voluntarily cease their infringement or pay a license fee for continued use of the patent.

The best known enforcement technique, however, is to sue someone for infringing your patent. If you prove the other party is infringing, you can obtain financial damages, as well as an injunction to force the other party to stop its infringing activities (e.g., Research In Motion finally settled its well-publicized lawsuit to avoid the possibility of having to shut down its popular BlackBerry network).

Bumps in the Legal Road

If you do decide to sue for patent infringement, there are a few issues to keep in mind. For one, the alleged infringer might not be in the United States, and a U.S. patent generally only protects against infringement that occurs within the country. You might be able to obtain a default judgment against the alleged infringer, and you can then attempt to force the proprietor of the virtual world to cut off the infringer’s account access. Another obstacle is that you might know the infringer only by its avatar’s name. In such a case, you would need to file the lawsuit in the name of “John Doe” and ask the court to issue a subpoena requiring the proprietor of the virtual world to divulge the account information of the “John Doe” avatar.

Another obstacle particular to patents is that some virtual worlds require that you license your patent portfolio to other users in order to access the virtual world in the first place. For example, as of Oct. 25, 2008, Linden Lab’s terms of service include the following statement: “You further agree that you will not make any claims against Linden Lab or against other users of the Service based on any allegations that any activities by either of the foregoing within the Service infringe your (or anyone else’s) patent rights.”

Suppose that you hear from an acquaintance that an avatar known as “Bad Infringer” is infringing your patent in Second Life? The terms of service, on their face, apparently make you waive any claim you might have against Bad Infringer in order to merely investigate your claim of infringement. While this clearly appears to be an unfair result, no court has yet addressed this issue or the patent license clause of the Second Life terms of service.

Patents are a powerful form of intellectual property. This article addresses just a few of the issues that arise when intellectual property — a form of virtual property — and virtual worlds collide. Patents on game play methodology and user interaction may provide a company a significant advantage over its competitors. However, a patent, if not procured and enforced correctly, can be worth little more than the paper it is printed on.

Ross Dannenberg and Steve Chang are principal shareholders in the Washington, D.C., office of Banner & Witcoff, a law firm dedicated to the protection and enforcement of intellectual property rights. Dannenberg is also the editor-in-chief of the Patent Arcade blog, and is an adjunct professor at George Mason Law School in Arlington, Va. The information in this article does not constitute legal advice, and is intended for informational purposes only. No attorney-client privilege exists or is otherwise created with anyone by virtue of this article. Each situation is different. Always contact an attorney to discuss the specifics of your case.