The Rebirth of the Hybrid Laptop: AMD’s Opportunity

Last week, an announcement from Lenovo got me thinking of Rory Read, AMD’s new CEO, who made some cryptic remarks about AMD going into ARM and no longer chasing Intel. Now, there are a number of hybrid or crossover products that will be coming out this year, with the most interesting being a cross between a notebook and tablet. This design, and we’ll probably see some examples at CES this week, will likely be the showcase for Windows 8.

Another potential showcase could emerge as well — a product that instead of using ARM or x86 might use both, and it occurred to me that AMD may be in the best position to provide that alternative.

With these new hybrids as my focus, it only seems appropriate that I make the products announced by Lenovo my product of the week.

Our technology life today is all about ugly choices. A smartphone is a big phone that does a lot of Internet things poorly due to its size and, as a result, you can’t live on it. A tablet would suck even more as a phone and so drops that feature in favor of a better Internet and media experience, but it lacks the performance and size of a notebook. And, finally, a notebook currently lacks the portability and weight advantages of a tablet, but it is far more useful if you want to actually create something, and generally easier to use (because you don’t have to hold it) for long format media like movies.

You have to admit that even an iPad gets heavy after a couple of hours. If we add a specialized product like an e-reader, we now have up to four devices we need to carry. A typical notebook weighs around five pounds, a tablet two pounds, an e-reader a pound, and a smartphone with charger about half a pound. With chargers and accessories, we are up to the carry weight of an old gaming laptop — more than 10 pounds — and we have a mess of wires and a bunch of products that don’t like each other much.

So, we leave some of them in the office or at home. That means we don’t have the reader when we get stuck someplace, we don’t have the notebook when we have a surprise project to review and edit, and tablets are mostly used in the bedroom and living room.

Recall that back in the 1990s, we typically were happy with just a small cellphone with massive battery life and a heavy notebook that actually weighed less than the combined mess we have today.

In short, it isn’t surprising that folks appear to be trying to find that perfect device that can combine two or three of these things and simplify their lives. The Kindle Fire combined tablets and e-readers successfully, and it has sold very well. The attach rate for keyboards on iPads is reported to be better than 30 percent, suggesting folks want to leave their notebooks behind, and the Ultrabook class of products increasingly blends the weight and battery life of a tablet with the usefulness of a notebook computer.

But things are getting even more interesting this year.

There are two kinds of combined products coming to market this year. The first, which is what Lenovo announced last week, we have seen before: a tablet that effectively becomes a notebook computer with the addition of a second ARM-based platform. The second, and arguably more interesting, we’ve also seen before in the Asus Transformer and Transformer Prime products: a tablet that can transform into a notebook computer.

The problem with both offerings so far is they make compromises that users have historically not been excited about. Notebook computers either run Windows or Apple’s OS X. Some of these products either run Android (Asus Transformer) or in the case of the notebook hybrid, Windows and something like Linux for the ARM portion of the product.

While this is still more convenient than having to carry multiple devices, the Asus products haven’t sold well, and prior efforts with ARM and x86 haven’t done well either. Finally, Windows tablets largely failed in market because the user interface wasn’t really designed for touch (and most required a stylus anyway).

Windows 8 runs on ARM and x86; in addition, it was designed for touch. This allows it, in theory, to provide a consistent UI across all configurations of both hybrid types. In short, with Windows 8, you can more easily get a combined solution with fewer painful compromises. But this is where I think it gets interesting.

As mentioned above, there are two types of hybrids: one that’s an internal hybrid that shifts internal models (ARM to x86); and one that’s a physical hybrid shifting external models (laptop to tablet). ARM and x86 technology providers tend to work poorly together, and this is where I think AMD’s opportunity may reside.

Right now, if an ARM part is designed for a notebook or an x86 part for a tablet, both are taken outside their comfort areas. Like a tennis player trying wrestling or a wrestler competing in tennis, neither will be as good as they are in the areas where they’re designed to excel.

ARM is best when power is most limited, and x86 is best when performance is the key criterion. The current class of successful hybrid cars tends to have an electric engine for economy and a gas engine for performance and range. This automotive model suggests that the perfect hybrid would not only morph between tablet and notebook, but it would have an x86 processor in notebook mode and an ARM processor in tablet mode.

AMD, with ARM, could create a blended x86/ARM offering that would be an optimized system much like the electric/gas systems in today’s hybrid cars are increasingly designed more as a system, and less as an electric engine poorly coupled with a gas engine. This would allow AMD to be well differentiated from both Intel and the existing ARM vendors and, rather than being a constant market follower, become a new market leader on top of Windows 8 — and likely become the favored core of Windows 9.

That strategy would make Rory Read’s comments make sense and, if successfully executed, create a far more interesting set of solutions and choices this decade.

Maybe we could call them Super Hybrids?

I made the ThinkPad X1 my product of the week several times last year, both when it was announced and after it became my primary carry box.

It was a predecessor to the Ultrabook class of products that we’ll see more of this week at CES. The only problem I’ve had with the X1 is battery life. Even with the extended battery, it was around six hours, which meant that watching movies on a plane often gave little reserve for work on a coast-to-coast trip (typically I work for a couple of hours in the airport before leaving) unless I charged right up until boarding.

And it wasn’t enough to leave the charger in the room. 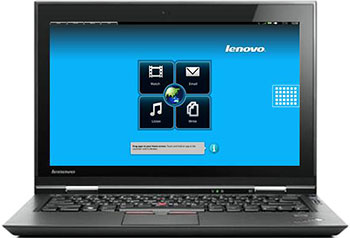 The ThinkPad X1 Hybrid has an ARM processor that allows the user to switch to the lower-powered mode for entertainment, typically one of the reasons I carry a tablet. In ARM mode, the battery life effectively doubles to around eight to 10 hours with the normal battery, and 12 to 14 with the extended battery. That is clearly tablet territory.

The custom Linux-based OS is more secure than Android, but without the Android Market, the user will be limited to enjoying media, browsing the Web, and light document editing, for the most part.

Switching modes is as easy as clicking an icon, and this will suspend an existing session when switching modes. Because this product is the first hybrid/crossover product announced this year running Windows, and because this idea of a blended product will likely define 2012, the ThinkPad X1 Crossover is my product of the week. It just goes to show, you sometimes improve on perfection by adding the word “hybrid” to it.