The BP Boycott, Apple, Microsoft, Google, E3 and the Art of Being Terminally Stupid

If you’ve been following the BP oil spill, you’ve seen that things haven’t been going well for BP. The cost of the cleanup will likely bankrupt the firm, leaving the U.S. and individuals to pick up the slack. So, rather than assuring that doesn’t happen, a bunch of rocket scientists, and I’m being sarcastic, have decided to speed up the bankruptcy by driving a boycott.

This sets the bar on stupidity and got me thinking about other stupid things this week in technology. There is a lot to go around, including the fact that taking potshots at this many companies in one column isn’t likely the smartest thing I’ve done either.

So, the subject this week is stupidity (and no this isn’t a discussion about your favorite politician or a member of my own family).

I’ll close with my product of the week — what is likely the best 3-D TV line out there, one that showcases not only that plasma isn’t dead, but also that it may be better than LCD for 3-D.

I belong to the Lifeboat Foundation, an underfunded organization focused on assuring we all don’t die. Yep — it’s underfunded because continuing to live just doesn’t seem to be that high a priority. One of the conversations that we’ve been having is whether the human species can survive unless it is genetically altered to be less terminally stupid.

The examples we were using have to do with the likelihood that if faced with an Earth-ending event, we would spend our time arguing over whether it existed or not, who was going to pay to mitigate it, who would take credit for the operaion if it were successful — or blame if it weren’t — and while we fiddled around, the planet-ending event would take place.

I argued that it didn’t matter what we did as an organization to come up with a plan to save the world, since we as a species would work to assure it wasn’t successful, suggesting our first step should be to find a way to rewire people so they would prioritize living higher.

So, when I point out the stupidity in others, be aware I also recognize that this same defective gene is in me, and I’m not feeling particularly brilliant at the moment either.

Apple lives for the customer experience and has one of the highest customer satisfaction and NPS scores on the planet. AT&T has one of the lowest customer satisfaction scores of any carrier in the United States. In order to get the deal Apple wanted, it chose AT&T, trading what would otherwise likely have been vastly greater success with the iPhone over time for higher short-term margins.

If Google passes Apple in smartphones, it will largely be because of AT&T.

Margins are great, but Apple’s greatest asset is its customer loyalty — and AT&T torpedoes that on a regular basis; like with last week’s iPhone preorder disaster, when customer records were exposed and systems failed, for example. You can’t buy back customer loyalty, and trading it for a few bucks is really stupid.

In most of the developed countries of the world, freedom of speech is a primary benefit — one we likely don’t focus on very much, but one that is incredibly important to our way of life.

Apple has repeatedly censored political satire and last week blocked a 70-year-old James Joyce book (it eventually reversed itself) for content. Messing with a fundamental freedom during an election year is like playing with gasoline during a 4th of July fireworks event. Not particularly smart.

I watched Microsoft, Sony and Nintendo do their big launches at E3 and while I’d personally give Microsoft the edge because it both refreshed its console and focused solidly on 2010 content, it felt like most everyone forgot that Apple is moving into this space largely unchallenged.

Typically, when industries see an outside threat, the competitors organize to address it. Initially Apple — and eventually, Google — represents this outside threat, which either needs to be embraced or fought.

Yet the competition seems to be using the “ignore” method of threat response and focusing on each other. The iPad, iPod touch, and iPhone, coupled with their gaming applications, will vie for the same discretional entertainment dollars with the game companies this holiday season. This would be like the U.S., Great Britain and Russia declaring war on each other and ignoring Germany in World War II. It sure would have changed the outcome.

Google at its outset seemed to make the statement that it wouldn’t become Microsoft. It has since seemed to check off a list of Microsoft mistakes as if they were things to accomplish. It has repeatedly breached trust, used its corporate power inappropriately, and brought out products that should have never seen the light of day. It is increasingly either being kicked out of countries or investigated for illegal activities.

I’ve already pointed out that Google may be excessively exploitive by design, suggesting it shouldn’t be attracting this much attention. This is like walking in a minefield behind a line of folks pointing out mines and feeling the need to jump on each one to see if it actually works.

I watched Microsoft make mistakes similar to those that hurt IBM a decade before, suggesting this is far from unique — but that doesn’t make it any less stupid.

I got a lot of calls on this subject over the last few weeks, and folks are already writing about candidates again. If an employee who performed phenomenally well over an entire career moves to a new job and does poorly, it generally isn’t the employee’s fault — it’s the manager’s. With CEOs, folks seem to suddenly become blind to this.

The body that is supposed to assure the success of a new CEO is the board, and if a CEO is struggling, that is where we should likely look first — but we virtually never do.

The board is supposed to give a CEO the needed mentoring to do what is a near-impossibly broad job, because every CEO who comes into the job is poorly prepared for it. The parts of Microsoft that Steve knows — those connected to the enterprise — are actually running very well, and Microsoft generates more revenue and profit then Apple does.

Replacing Steve would simply change a known problem for an unknown problem and likely leave the cause in place. If Microsoft is to rise to its potential, it needs an active board with the skills — like marketing and consumer products — that Ballmer currently lacks, so he can be mentored into developing those skills.

Replacing Steve Ballmer would be like, well, firing Steve Jobs back in the 80s when John Scully and Apple’s board, at that time, should have been replaced instead. If the board can’t help Steve Ballmer be effective because it has the wrong skill set, then how can it effectively choose his replacement?

Wrapping Up: Wired for Stupid Is a Universal Problem

We are all wired to do stupid things, and unfortunately, “stupid is as stupid does” actually makes sense. Our resistance to trading short-term financial or positional benefits (like raises or titles) for vastly more important things like long-term security, personal safety, and happiness is part of what makes us human.

That is the part, I maintain, that may assure we aren’t around much longer as a species. I think this is one of those moments when it would serve all of us to step back, think about what we are currently doing that is stupid, and stop doing it. Me, I’m going to get off the PC and go ride the bike.

I worry that — particularly when it comes to saving the planet — our inability to consistently see what is important will end us. In my case, “Pissed Off the Wrong Person” will likely be on my tombstone.

Product of the Week: The Panasonic Viera VT Series

Panasonic flew me down to Los Angeles a little more than a week ago to show me its Viera VT line of TVs, and I was very impressed. That is saying a lot, because about a decade ago, I was outspoken in my belief that plasma would die out and be replaced by LCD technology.

It turns out that when faced with death, companies actually do step up, and the current generation of plasma sets from Panasonic and others are arguably better, at similar price points, than their LCD counterparts. This is particularly true for the new 3-D content.

Plasma has always had the advantage of deeper blacks, but historically it has tended to be slower, burn in images, and have relatively short service lives. The plasma folks have fixed all of the shortcomings and retained the deep blacks. In addition, by speeding up the technology, plasma is actually better than LCD at the moment, because LCDs can’t turn off fast enough, leaving shadows in 3-D that shouldn’t be there. 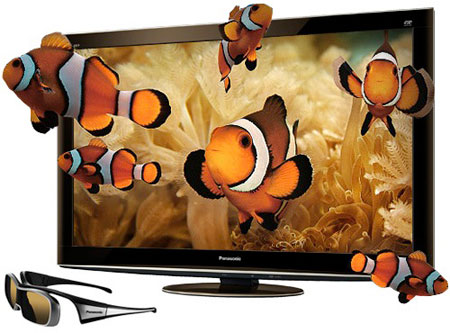 In addition, because plasma generates its own light and doesn’t require LEDs, it is better at applying that light so you don’t get the light halos that LED gives bright objects on dark backgrounds with LCD sets.

What makes the VT series stand out in a field of plasma displays, is that Panasonic appears to have one of the most universal glasses for 3-D (at $150 a pair, trust me, you want universal), and it has done the most work to eliminate glare and assure the quality of the video image for both 2-D and 3-D content.

Because Panasonic proved me wrong with respect to the demise of plasma, showcasing that I can be stupid too, and because it truly does stand out against the crowd, the Panasonic VT series Plasma 3D TVs are my product of the week.