The calls for gun control in the United States have grown more urgent since the December shooting in Newtown, Conn., and it is likely that legislation will be introduced in Congress this year. Gun control advocates are pushing for more extensive background checks, a ban on high-capacity magazines, and restrictions on semi-automatic firearms.

Gun rights supporters have countered that criminals would ignore such bans, which would primarily affect only law-abiding gun owners.

Could a high-tech solution satisfy both groups? With tensions running high, that is probably unlikely, but the fact is that recent advances could make guns safer.

Movies and video games often suggest a future when guns can be specifically tagged to an individual and rendered useless by anyone else. The recent James Bond movie Skyfall features such a firearm, but is this technology really possible? Actually, it is already in existence.

In 1999, Mossberg incorporated RFID technology in a smart gun. The resulting product, which was developed through its KinTech Manufacturing subsidiary, was the iGun — a shotgun that could be used only when the owner had a special ring in the firearm’s proximity.

Yet the demand for it hasn’t come. While designed for law enforcement or those who wanted a secure gun, the iGun failed to capture an audience.

“The technology has actually been shelved,” Mossberg told TechNewsWorld. “There is no activity for it.”

Similar technology was developed by Armatix, which requires the gun owner to wear a special watch to activate the gun.

This takes the process a step further by including a fingerprint scanner on the watch, which must be scanned to remove a lock and safely discharge the firearm. 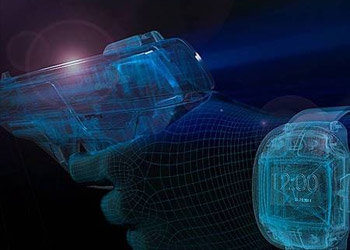 “It is a twofold system,” said Belinda Padilla, president and chief sales office for Armatix North America. “We have a digital locking device that also goes inside the barrel. It prevents the gun from being fired.”

The Armatix system also ensures that if a gun is stolen with the watch, it still cannot be used.

“This digital handgun system makes users authenticate it before they can use it,” Padilla told TechNewsWorld.

There are other locks, including pistol cases and gun safes that require fingerprints to be read or even retina to be scanned, but is that going far enough?

“Those technologies are only 80 percent effective,” quipped Mossberg, “and when it comes to gun safety, that ain’t good enough.”

The next step in ensuring that the wrong person can’t use a gun might be those that can truly determine that the owner is in fact the owner.

“The next generation of this technology will absolutely go beyond biometrics and could require DNA,” said James Canton, Ph.D., of the Institute for Global Futures. “That is the only way to truly authenticate your identity. Everything else you can defeat.”

This could go beyond guns in the home to firearms used by the military, ensuring that serious hardware can’t end up in wrong hands, Canton told TechNewsWorld.

However, much of this technology isn’t likely going to be embraced by gun rights supporters, especially as it might only have limited effectiveness.

“There is absolutely no deterrent in technology except against those who would abide by the law, and for them I see harassment, denials, and increased costs,” said David Codrea, author of The War on Guns.

Another concern would be that someone with nefarious motives could hack the system via some sort of “master key,” said Codrea. Such fears, along with costs, could certainly limit adoption.

There is another level of this debate, as keeping guns out of the wrong hands is just part of the equation. In many cases, guns were legally purchased and owned by unstable individuals who then used their firearms to commit heinous crimes. How do you stop those events from happening?

One way might be to use technology to make the world safer, but sacrificing any amount of freedom in the name of security could be viewed as a slippery slope. Yet this issue is not much different from keeping airplanes and airports safe from would-be terrorists.

“This is just the beginning of the evolution of security that will make the world safer,” said the Institute for Global Futures’ Canton, “but it will come at a cost of giving up some freedom.”

However, big data and cloud computing could also enable law enforcement to continually monitor for threats, look for those who seem out of place, and possibly stop a mass murderer from striking.

“Predictive analytics could be built into society,” said Canton. “There could be a way it could put two and two together, and it could keep unauthorized individuals from going where they are not allowed. People may not be comfortable with it, but this is inevitably where we are going.”