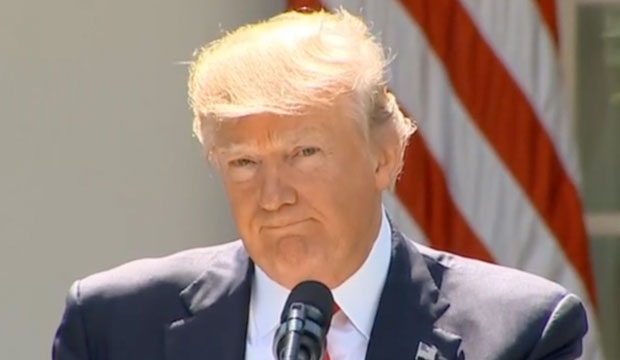 Several high-tech industry companies that have opposed the United States’ withdrawal from the Paris Agreement have pledged to continue their environmentally conscious efforts.

Google CEO Sundar Pichai promised to stay the course in his tweeted response:

Disappointed with today’s decision. Google will keep working hard for a cleaner, more prosperous future for all.

“Withdrawing from the Paris climate agreement is bad for the environment, bad for the economy, and it puts our children’s future at risk,” wrote Facebook CEO Mark Zuckerberg.

“For our part, we’ve committed that every new data center we build will be powered by 100% renewable energy,” he added.

Deeply disappointed by President's decision to withdraw from ParisAgreement. We will double our efforts to fight climate change. pic.twitter.com/cmCLf9CoVY

“Microsoft believes that climate change is an urgent issue that demands global action,” President Brad Smith posted on LinkedIn. “We’ve sent letters to and held meetings on this topic with senior officials in the State Department and the White House.”

Apple CEO Tim Cook earlier this week urged President Trump to keep the U.S. in the agreement, he told employees in an email.

Climate change is real, Cook said. Although disappointed with the pullout, he pledged to continue the company’s environmental push.

Why Trump Withdrew From the Paris Agreement

Compliance with the terms of the agreement “could cost America as much as 2.7 million lost jobs by 2025,” including 440,000 fewer manufacturing jobs, President Trump said, citing a study by National Economic Research Associates.

By 2040, compliance would cut production for various sectors, costing close to US$3 trillion in lost GDP and 6.5 million industrial jobs, Trump said, based on the study’s findings.

Other studies, carried out not only by environmental organizations, but also by Citibank and the Organization for Economic Cooperation and Development, have concluded that failure to curb climate change could cost the U.S. economy trillions of dollars, according to a New York Times news analysis.

The Paris Agreement “could legitimately be branded as an economic accord, given the potential financial impact on the countries that agreed to it,” said Rob Enderle, principal analyst at the Enderle Group.

However, “given the impact on climate is both disputed and indirect, it likely would have been more accurate to call this an accord that’s more directly focused on pollution, because the core measurements were tied to that,” he told TechNewsWorld.

The Paris Agreement “was more of a political vehicle and one that was long on promise but very short on actual content,” Enderle said, adding that it lacks teeth to ensure compliance.

It appears that Trump’s decision this week has triggered a process that will continue into 2020, likely ensuring that climate change will be a significant issue during the next presidential election.

The Trump administration will begin negotiations either to re-enter the Paris Agreement or to create a new one “on terms that are fair to the United States, its businesses, its people, its taxpayers,” the president said.

However, France, Germany and Italy said in a joint statement that the Paris Agreement cannot be renegotiated.

“Overpopulation and the environment are issues that must be addressed now,” said Jim McGregor, principal at Tirias Research.

“If there’s something awry with the current agreements, we need to address those issues, either with modifications to the agreement or a new one — not just walk away,” he told TechNewsWorld.

“The U.S. should be the leader, not the anchor holding us back by not signing the accords,” McGregor added.

What High-Tech Companies Can Do

“Any number of companies are acting consciously to improve their environmental impact,” noted Charles King, principal analyst at Pund-IT.

For example, Dell EMC “has a variety of initiatives,” he told TechNewsWorld, including “using recycled materials in their packaging … and an initiative to recycle plastics floating in the ocean.”

Still, many tech companies “talk the talk but don’t walk the walk when it comes to the environment,” Tirias’ McGregor pointed out.

The fact that both supporters and opponents of environmental issues “know much of what they’re saying isn’t true, makes positive change almost impossible to accomplish,” Enderle said.

The tech industry “is all about data and accuracy,” he remarked, and it “could use these tools to cut through the dishonesty and help those that truly want to make change.”