Tech and the Art of Text

In 1999, Chris Baty was looking for inspiration to write a novel. He got together with some friends in coffee shops and started writing, with rewards of coffee for those who reached their word counts.

It was the birth of National Novel Writing Month, which the following year would become NaNoWriMo, a Web-based community of writers who commit to writing a 50,000-word novel in 30 days. 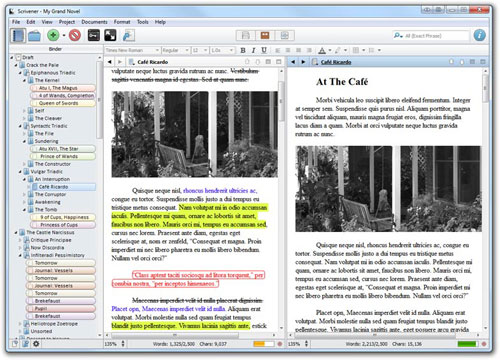 Scrivener gives writers a variety of tools not typically found in word processors. (click to enlarge)

Since those humble beginnings, NaNoWriMo has grown to include more than 300,000 participants each November, with thousands more participating in Camp NaNoWriMo in April and July. Participants use the site’s word count calculator to motivate them to stay on track, dip into its forums to connect with like-minded writers, receive a steady stream of emailed pep talks and advice from accomplished writers, and complete word sprints on Twitter.

“NaNoWriMo helps people reach their creative dreams,” Grant Faulkner, NaNoWriMo’s executive director, told TechNewsWorld. “We’re really about empowerment as much as we are about creative writing.”

One myth about writers is that they toil alone, doing their creative work in isolation. Digital technologies, social media and online forums like NaNoWriMo, however, give contemporary writers plenty of ways to share and communicate with other writers.

“A crucial part of NaNoWriMo is having a community of fellow writers and artists and having a dialogue with them,” said Faulkner. “Writing gets cast as an activity done in solitude, but writers thrive when they’re in conversation with others.”

That sense of community and the inspiration it fosters have brought many people to writing who might never otherwise have considered themselves writers.

“To have 300,000-plus people show up to write a novel is a revolution in itself,” said Faulkner. “It’s generally ordinary people who have a creative spirit. They want to get out and explore.”

“I think that digital technologies are affecting every form of communication,” Andrea Lunsford, the Louise Hewlett Nixon Professor Emerita of English at Stanford University, told TechNewsWorld. “We’re in the middle of the biggest literacy revolution the world has ever seen. Young people are writing more than ever in the history of the world.”

With digital technologies like texting, social media and email, people have a range of ways to communicate with the written word — even when they don’t think of what they’re doing as writing.

The key to using digital communication tools effectively is understanding some of the basic principles of rhetoric.

“Always when you’re writing, you’re thinking about audience, purpose and context,” Heidi McKee, associate professor of English and director of the professional writing major at Miami University, told TechNewsWorld. “The practices of rhetoric that Aristotle discussed are just as important now as they were then.”

People writing in a digital world have so many technologies at their disposal that they must continually make decisions about how best to use these technologies for particular audiences or contexts. This, says McKee, is where writing teachers can help.

“There’s a perception that kids can’t write because all they’re doing is texting,” said McKee. “Kids today are writing more than they ever have, but they’re writing in a different style. They often use one particular style in one setting and apply it in a different setting.

“That’s one of the key things our schools have to teach: how to choose the appropriate style and approach depending on the genre you’re using or the audience you’re addressing,” she added.

How It Gets Done

In addition to connecting writers and broadening audiences, digital technologies have also changed how, when and where writing gets done. From the succinctness required by Twitter’s 140-character limit to the world of emoticons on the smartphone screen, technology determines, in large part, the nuts-and-bolts of writing.

The multitude of formats, techniques and platforms has inevitably changed what it means to write and what that writing looks like.

“We spend so much of our lives writing, and the technologies we have to do that are so varied and so ubiquitous, that we write differently,” Jeff Grabill, a professor of rhetoric and professional writing at Michigan State University, told TechNewsWorld.

One of the major changes brought about by digital technologies in the world of writing is the move toward multimedia communications — the weaving together of text, images, video and graphics.

“That sort of multimodality has been around for centuries, if you think about illuminated manuscripts,” she added. “Writers have always attempted to integrate different modes, but now, people can do it more easily. Even grandma can have a blog.”

New software designed for writers is also cropping up, providing a host of new tools and techniques for creating, editing, shaping and publishing text. Scrivener, for instance, was created by Keith Blount, a writer who wanted tools to help facilitate the process of writing a variety of projects, from nonfiction books and novels to screenplays and academic works.

“The whole thing started as a hobby, with me building it around the way I write,” Blount told TechNewsWorld. “When I decided to polish up the very first version for sale, I hoped there might be a handful of writers who would find it helpful too, but I never imagined it would be so many that this would turn into my full-time job, let alone provide jobs for a small team, as it does now.”

Scrivener offers a range of tools, including the ability to open multiple windows, upload research materials, incorporate multimedia material, break a long project into multiple parts, compile those parts into a finished document and even format that document as an e-book.

“It has only very superficial similarities with word processors such as Word or OpenOffice,” said Blount. “It’s unlikely you’d fire up Scrivener if you were writing a letter or memo, and it’s certainly not the right tool for creating prettily laid-out newsletters or leaflets.”

If you’re working on longer texts, though, “hopefully that’s when its toolset starts to make sense.”