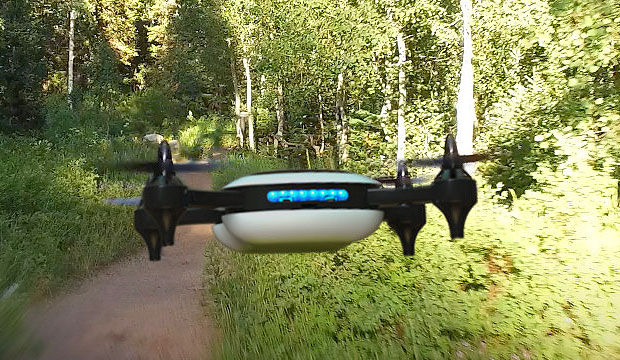 Teal on Wednesday introduced what it billed as the world’s fastest production drone. Aside from its drone’s capabilities, the company is drawing attention because George Matus Jr., its founder and CEO, is an 18-year-old recent high school graduate.

The drone can fly at 70 mph in all weather conditions and has reached a top speed of 85 mph in favorable conditions. It can withstand 40 mph winds, is built to run apps, and can be controlled using a smartphone, tablet or hobby controller. It comes with a one-year warranty.

“For certain segments of the market, especially racers, this will be of interest,” said Jim McGregor, principal analyst at Tirias Research.

“This isn’t a drone for the average consumer; it’s for the techies that want that latest and greatest, and the ability to make modifications,” he told TechNewsWorld.

The Teal is “well within the allowable characteristics of the rule,” the FAA said in a statement provided to TechNewsWorld by spokesperson Les Dorr.

Teal is taking preorders for the US$1,300 drone.

Buyers will get the drone, two high-performance flight batteries, a charger, two sets of propellers, expansion cables and some surprises.

The first 500 orders will get the Signature Series, which adds an Endurance Package that doubles the drone’s 10-minute flight time.

The drone weighs 730 gm, has a payload capacity of 500 gm, and is made from carbon-infused polycarbonate plastic.

Connectivity options include three USB 2 ports, one USB 3 port, and one HDMI 2.0 port.

Its 13-MP camera has electronic stabilization and can record videos in up to 4K at 24 fps. It can provide live video streams of up to 720p. The camera supports all SD card types and is compatible with virtual reality headsets.

It supports geofencing. Other features include autonomous flight and automatic landing. A sensing and avoidance camera feature is in the works.

The Teal drone uses the Teal OS, which is written in C.

It will be offered with an SDK and APIs, and “we’ll be building out apps in the fall before we start shipping,” Matus said.

The main control application for the Teal drone is a command-and-control app. Teal and Neurala are codeveloping a Follow Me app that employs image recognition algorithms used by NASA and the U.S. Air Force. It will let the drone follow a person or object using real-time object recognition.

However, “I don’t see a huge need for users to run apps on drones,” commented Rob Enderle, principal analyst at the Enderle Group.

“Most people just want the thing to be easy to use and not crash,” he told TechNewsWorld.

Making drones that work like PCs “increases the risk of viruses and rogue drones, and you introduce unreliability,” Enderle said.

Teal’s main competitor is DJI, which currently claims 70 percent of the market. DJI this spring introduced its latest drone, the Matrice 600.

DJI focuses on aerial photography, noted Matus, while Teal “is going after four different audiences: the consumer who’s never flown before, hobbyists, racers, and developers who want to push their apps.”

“We can speculate how great the drone will be against the competition,” said Enderle, “but we can’t compare a product not in market to one in market.”

Teal’s current focus is on getting traction in the market.

“Later, when we get higher volume and increase our market share, we’ll look into making money,” Matus said. “We’ve discussed this with our VCs, and evaluated market demand and opportunities in the future.”

Matus has raised $2.8 million from VCs, including $100,000 from tech luminary Peter Thiel.