SwiftKey X Keyboard, an app from TouchType, is available for US$2.99 at Google Play. I’ve got fond memories of physical keyboards embedded in smartphones. My PalmTreos — I had three — were superb at composing email and SMS text responses. I evenmade notes for a book I was writing on one Treo.

I speculate that the hardware keyboard is the principal differentiator keepingBlackBerry’s brand alive, along with its super-secure, cheapo messaging system that wasused to organize riots in the UK last year, of course. 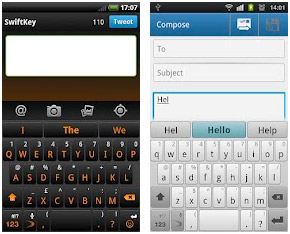 Time goes by, and I am now accustomed to, and resigned to, typos — or even waiting untilI get back to homebase to send long email replies. So, I was intrigued when I cameacross SwiftKey X Keyboard’s pitch: “Very sloppy typing will magically make sense.” Itsounded right up my street. A review was in order.

Having tried Swype — the keyboard that lets you input by sliding a finger from character tocharacter — and others, I was keen to check out a new technology.

There are two paid SwiftKey versions, a tablet-optimized app and a phone app. Each isa separate Play store purchase at $2.99 each.

To be fair to the maker, I installed theSwiftKey Tablet X onto my tablet, and the SwiftKey X to the phone, although you maybe able to get the base version to work on a tablet. I tried the phone version on tablet, butfound the interface too small for my fingers.

Setup was well organized in steps, although I was stumped by a question that asked if I were a precise typist or a rapid typist. According to the explanationgiven, rapid typists rely on autocorrection, whereas precise typists use prediction.

I chose “rapid” based on recollection of comments from editors — they’re always correctingme, if not automatically.

My first test was on the tablet, using the SwiftKey-specific keyboard. I typed “the quickbrouwn,” which was immediately caught and changed to “the quick brown.” A score.

The app correctly did not add an apostrophe in “dogs” when I completed the entiretypists’ standard test sentence of “The quick brown fox jumped over the lazy dogsback.”

Dogs are plural in that sentence in order to make use of all characters. However,disturbingly, SwiftKey also did not correct me when I purposefully added the apostrophe.Hmm.

The second test involved prediction. Words that I typed, including “big” wordslike “superfluous,” were predicted correctly and quickly.

However, the app did havetrouble with trade names. A residential lighting control unit maker’s name that I wantedto type, “Grafik Eye,” was understandably not predicted.

Overall, SwiftKey prediction did save me a considerable number of keystrokes, and I wasable to anticipate difficult words that it would not be able to predict, like the trade name.

SwiftKey provided for multiple languages and had various keyboard permutations tochoose from, including an excellent split-keyboard that’s designed for tablet-sized thumbtyping, and different colors.

Other features include foreign characters typed through long key presses.

Overall, it was quicker typing with SwiftKey because of the predictions, although not asquick for me as the older hardware keyboards found on older phones.

However, SwiftKey does do what it says it does. I’m finding that I regularly use thespecial thumb typing keyboard on a tablet. I’ll be keeping SwiftKey around for now.

Eternal Sunshine of the Spotless Smartphone